Even the New York Times now admits it: the southwestern border is in crisis, a reality confirmed by new data released Wednesday.

The new figures from U.S. Customs and Border Protection (CBP) show that nearly 150,000 people were apprehended trying to illegally immigrate in May. That makes it the third month in a row in which apprehensions exceeded 100,000. CBP has repeatedly asked Congress for emergency support to offset the enormous strain this influx is putting on limited resources.

In absolute numeric terms, illegal immigration is less of an issue than in years past. It is who is actually coming—and how CBP has to respond—that is at the root of the crisis. 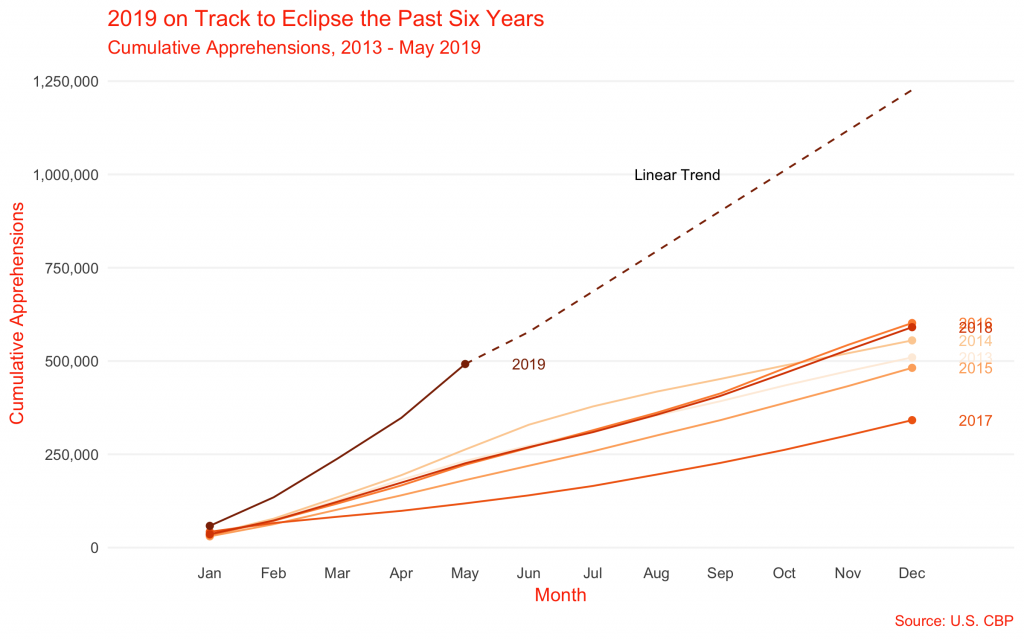 Over the past six years—covering Barack Obama’s second term and Donald Trump’s first—immigration enforcement officers have averaged about 500,000 apprehensions per year. As recently as 2017, cumulative apprehensions had dipped to fewer than 350,000.

As of last month, CBP data show, just shy of 500,000 people had already been apprehended. In other words, a year’s worth of apprehensions had been covered in the first five months of the year alone.

The above trend line is based on a linear extrapolation from 2019’s cumulative apprehensions so far. The actual data probably will not be linear—apprehensions tend to fall in the hot summer months, for example. However, CBP does project that apprehensions are "on track" to exceed one million by the end of the fiscal year in September. 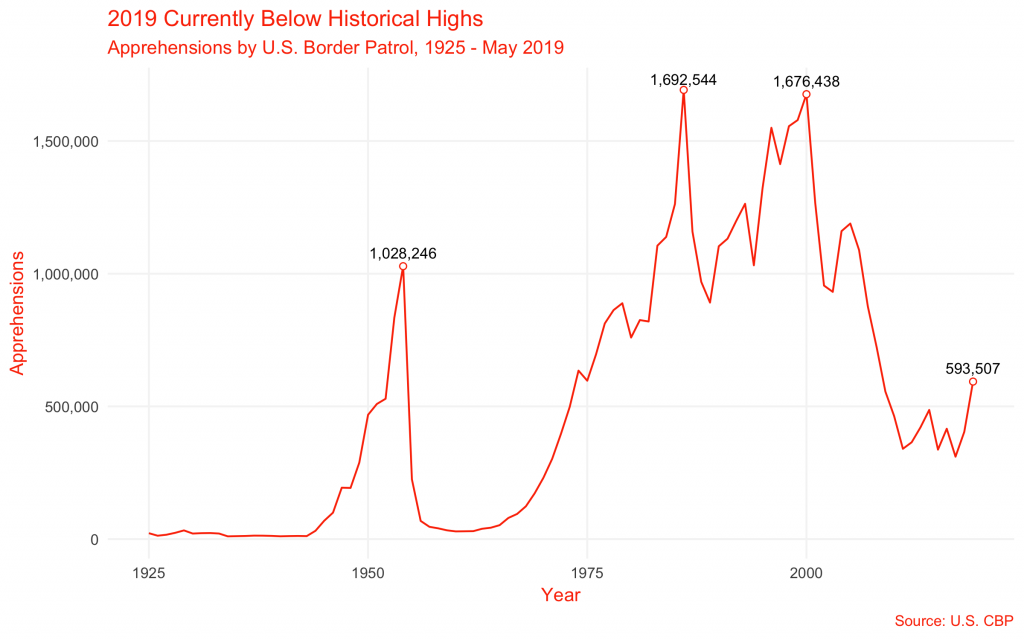 Two agencies are responsible for border enforcement: the Office of Field Operations, which manages points of entry, and the U.S. Border Patrol, which operates between them. Data on apprehensions by OFO is not actually available prior to the start of FY 2013, but USBP, which is responsible for the bulk of apprehensions, has been keeping track since 1925.

Comparing the total number of apprehensions by USBP today to that series paints a less sobering picture than the cumulative recent data. Year-to-date apprehension levels are about where they were 10 years ago, towards the end of the Bush administration. They are well below historical highs, like the 1986 peak linked to that year’s mass amnesty. In an absolute sense, then, the mere number of apprehensions is not at "crisis" levels in historical context.

But Who is Being Apprehended has Changed 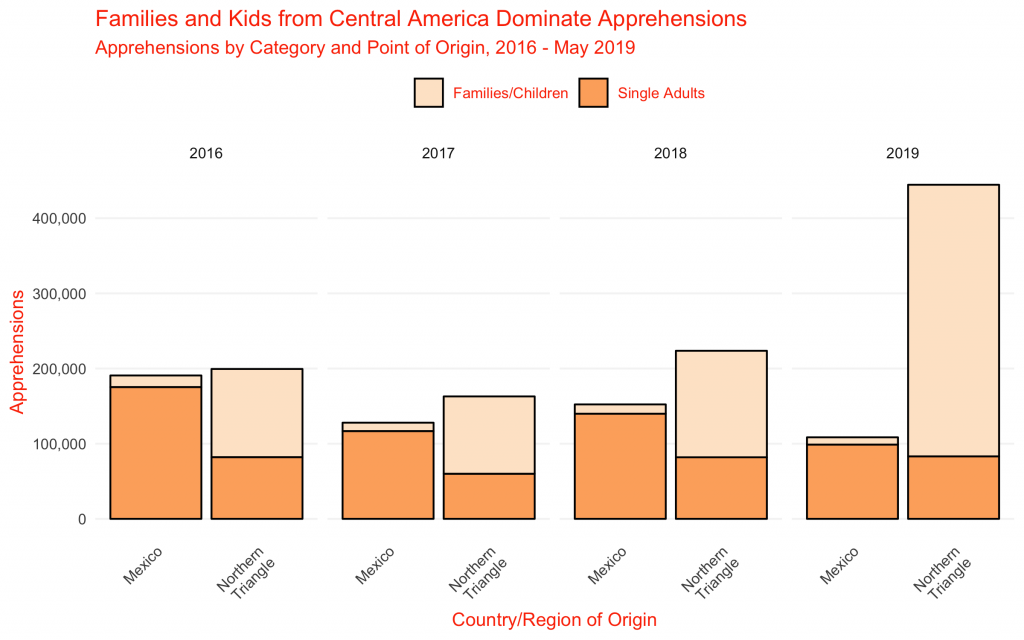 Back in the 1990s and 2000s, most of the people caught trying to cross the border illegally were single, adult men from Mexico, generally looking to work illegally in the United States. However, Mexico has become more developed and older on average, meaning that the share of economic migrants from our southern neighbor has dropped significantly.

In their place, however, have come large numbers of people from Central America, namely the "Northern Triangle" countries of Honduras, Guatemala, and El Salvador. These nations have some of the highest homicide rates in the world, and are wracked by corruption and graft. Emigration is thus an attractive option: One recent survey found that 40 percent of Guatemalans want to leave their country. As a result, the number of arrivals from these countries began to overtake Mexican immigration in recent years. 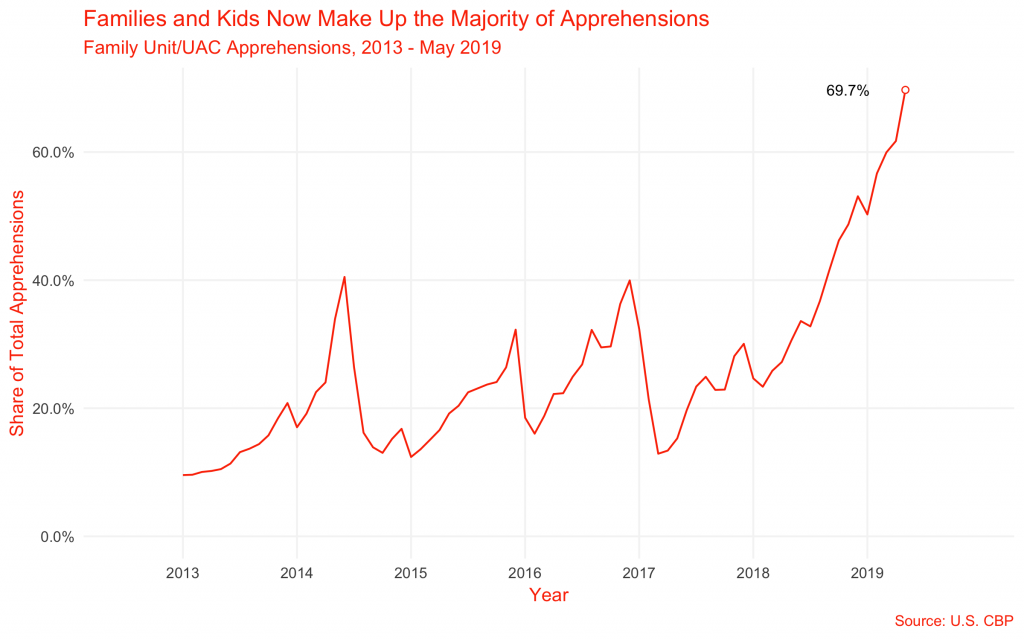 Country of origin is not the only thing that has changed. Single, adult men have been replaced by either members of families ("family units" in CBP parlance) or unaccompanied minors (UACs). 70 percent of people apprehended in May were either family units or UACs. By comparison, the share only hit around 40 percent during the unaccompanied minor crisis of 2014.

One consequence of this is an increase in the size of groups of people CBP apprehends. According to the agency, border patrol agents have encountered over 180 groups of 100 people or more since October of last year. That is an order of magnitude larger than the 13 groups apprehended in FY 2018 or two in FY 2017.

And That Makes for a Much Bigger Detention Challenge 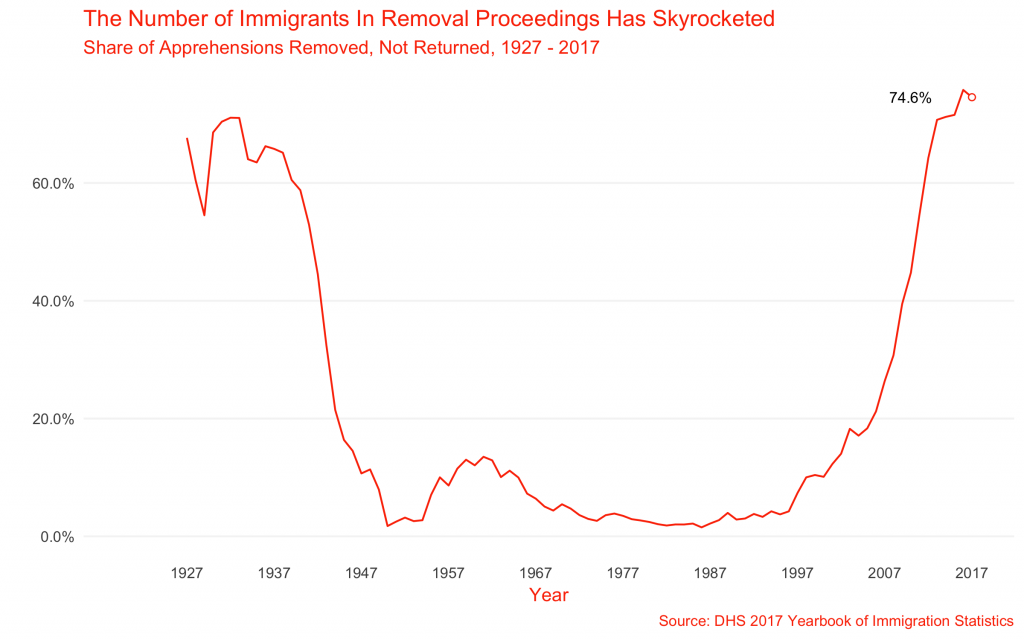 When most of the illegal immigrants apprehended at the southwestern border were from Mexico, the solution was simple: Send them back across the border. In modern DHS parlance, this is called a "return"—a detained person waives his right to a formal hearing, is "voluntarily deported" across the border, and in return is not barred from applying for reentry later. It works well for illegal arrivals from contiguous countries, i.e. Mexico.

But CBP cannot just "return" most of the people it is apprehending today, for several reasons. Many apprehended migrants claim a "credible fear" of violence or political prosecution if they are deported, entitling them to a credible fear hearing and, in most cases, a hearing before an immigration judge. Such proceedings can take months and months, entitling the apprehended person to remain in the country and, eventually, get a work permit.

This reality is exacerbated by the number of children now arriving. Under the 2008 William Wilberforce Trafficking Victims Protection Reauthorization Act, DHS has to detain any minor from a non-contiguous country, rather than summarily eject them, a move meant to deter child traffickers. And under 2015 interpretation of the 1997 Flores settlement, detained minors have to be released into the interior within 20 days of apprehension.

The Trump administration has tried to work around these realities. It ignited a firestorm by trying to adhere to the terms of Flores and separating parents and children; it has since backed down on this policy, and sought to get Flores replaced, an ongoing legal battle. Still, the requirements for how asylum-seekers and children are treated have proved an enormous barrier to effective enforcement in the current environment.

In other words, the legal framework is built for waves of adult Mexican men, and is woefully ill-equipped to handle the demographic shift. The result, according to CBP, is a detention system well past the point of breaking, with more people currently in custody than there are agents on the border.

Fixes Are Not Forthcoming

CBP has responded to all of this by surging agents to the border, and allocating additional funding to medical, transportation, and processing needs. But Congressional gridlock makes it unlikely that deeper changes will happen anytime soon.

Sen. Lindsey Graham (R., S.C.) has introduced a proposal to reform the asylum system, and the White House has been vocal in its support for this and other such fixes. But House Democrats seem to have other priorities in mind, on Tuesday passing a bill to grant amnesty to 2.5 million illegal immigrants, with no changes to the immigration system alongside.

That leaves the ball squarely in President Donald Trump’s court. With CBP stretched beyond breaking, Trump is looking to Mexico to take responsibility for stemming the tide, announcing plans for the imposition of a tariff on the nation, to increase monthly until illegal immigration declines.