UPDATE Jan. 17 10:50 a.m.: Following publication of this article, NowThis deleted their tweet. The Free Beacon saved a copy of the original video, and it is included below.

In a Tuesday tweet, NowThis posted video of members of the far-left Jewish Voice For Peace criticizing President Donald Trump's executive order combating anti-Semitism and comparing Trump's handling of the border crisis to the Holocaust. "We're seeing people die at the border from lack of medical care," said Becca Lewis, a senior at George Washington University. "That's how Anne Frank died. She didn't die in a concentration camp, she died of typhus."

NowThis deleted the tweet Friday after receiving criticism, and posted a corrected version that, in their words, "removed a segment… in which the speaker misspoke regarding Anne Frank’s death." The Washington Free Beacon managed to pull and save the original video.

CORRECTION: We have removed a segment of this video in which the speaker misspoke regarding Anne Frank’s death

These Jewish and Palestinian students are speaking out against Trump for equating anti-Zionism with anti-Semitism in his Judaism executive order pic.twitter.com/k6YGsp56h4 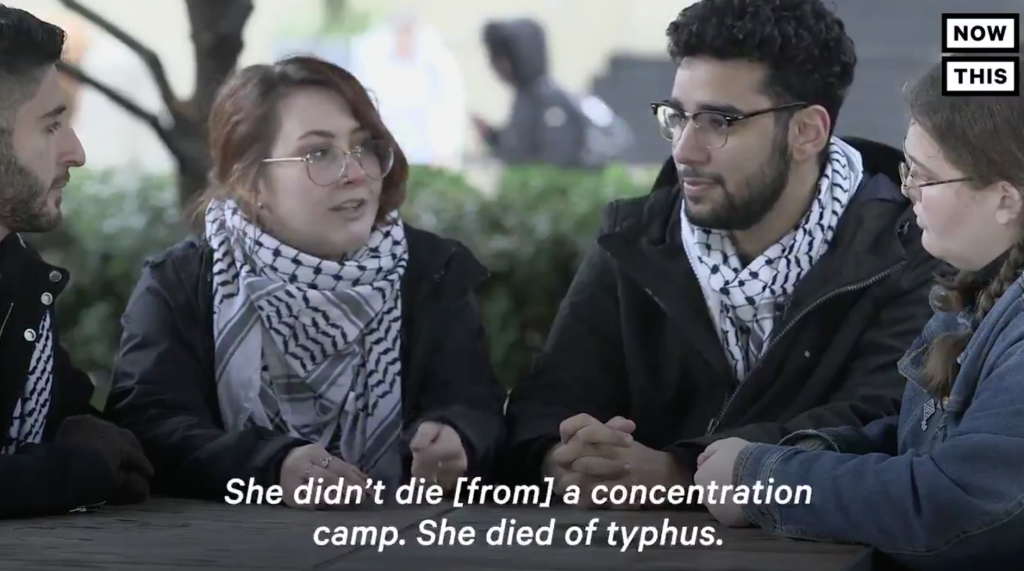 But the altered claim is also rejected by Holocaust historians, who draw no distinction between the victims actively murdered by gas chambers or firing squad and those who died from disease. The Holocaust Memorial Museum notes that typhus victims died of "deliberate neglect" as part of "the German policy to cause the deaths of large numbers of Jews through over-crowded, squalid living conditions and a lack of reasonable medical care."

The fact that Anne Frank likely died of disease rather than being executed directly by Nazis is also a favorite talking point of neo-Nazis. The Holocaust-denying Institute for Historical Review, for example, says in its FAQ that Frank "succumbed to typhus in the Bergen-Belsen camp, just a few weeks before the end of the war. She was not gassed."