Hundreds turned out at the grand opening of a gun shop just a few miles from the Washington, D.C. city limits on Saturday.

The Arlington storefront was packed with people handling a wide variety of firearms, eating breakfast pastries, and talking to the staff of NOVA Armory. The small boutique, which specializes in high-end firearms, opened despite fierce resistance from local anti-gun activists and politicians.

The resistance included a protest targeting the gun shop's opening.

The protest was held several blocks away from the store in a local park, and most protestors did not come over to the actual location of the store. Kathy Witkowski-Jacobs, a self-identified "hippie" from Arlington who requested to be referred to as "Mama Nanny Cat Dog," was the lone protestor to show up outside the store. At her feet was a plate of food somebody at NOVA Armory had brought out for her.

"First of all, I think anybody that has a gun needs to get their head examined like we get our eyes checked every year," she said, holding a sign warning that gun violence may force everyone to homeschool their kids to keep them safe. "Those that have guns need to get regular yearly check-ups because look at the monster that went into Newtown and annihilated all those babies. It's not the guns, it's the gun owners who are unstable."

The anti-gun activists’ efforts failed, in part, due to a gun rights group, the Virginia Citizens Defense League, which rallied behind NOVA Armory. "This is simply a business," Philip Van Cleave, the group’s president, said. "A law-abiding business like so many." 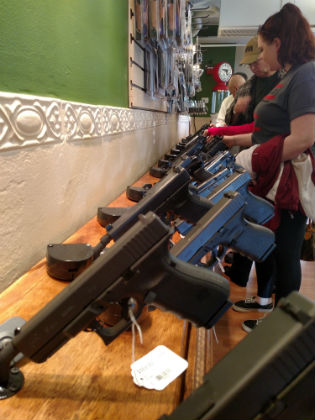 Van Cleave said the attempt by activists and local politicians to pressure the landlord into breaking the gun store's lease was "underhanded" and moved his organization to act. "We saw that and our group couldn't let that stand without a fight so we got involved. We wanted to make sure the store could open and have a fair chance."

Dennis Pratte, the owner of NOVA Armory, said he had been receiving congratulatory phone calls and messages from all over the state. "We couldn't be happier," he said. "There were a lot of times we thought about throwing in the towel but people kept calling us."

Pratte, who has owned other gun stores located inside the Beltway in the past, said he opened the Arlington store because he believes the area is currently underserved. "It's an area that's underserved by the firearms industry," he said. "We hope that this will be an area that will draw from D.C. as well as Arlington and parts of Alexandria."

Pratte said he has a good working relationship with Charles Sykes, the only firearms dealer in D.C., and hopes to attract a lot of business from inside the city. He said he is looking to open a location within the city if he can find a landlord willing to lease a storefront to him.

The upscale selection of firearms, tablet-based online shopping, and individual consultation at NOVA Armory seem designed to appeal to a more affluent customer base.

Pratte pointed to the free gun safety course NOVA Armory offers with every gun purchase, the inexpensive concealed carry courses, and the number of law enforcement officers the store expects to serve as reasons he hopes all members of the community will come to appreciate the store.