The gender pay gap in Sen. Elizabeth Warren's (D., Mass.) office is nearly 10 percent wider than the national average, meaning women in the Massachusetts Democrat's office will have to wait longer than most women across the country to recognize Equal Pay Day.

Equal Pay Day, created two decades ago by the National Committee on Pay Equity, is scheduled by using the Census Bureau annual unadjusted gender pay gap to determine how far into the next year women would have to work to match annual earnings of men. Last year's figures, showing that women earned 79.6 percent of what men earned, put Equal Pay Day on Tuesday April 4, more than three months into the calendar year.

However, women working for Warren were paid just 71 cents for every dollar paid to men during the 2016 fiscal year, according to a Washington Free Beacon analysis.

When calculated using average salaries rather than median, the pay gap expands to just over $26,051, or about 31 percent.

Consistent with previous Free Beacon analyses of Senate salary data, only full-time staffers who were employed for the entire period in question were included in the calculations.

For example, Warren's former chief of staff Mindy Myers and her male replacement Dan Geldon were not included because neither worked the full year.

Among employees employed the entire year, only one woman, Warren's director of scheduling, earned a six-figure salary, at $100,624.88.

Many discount attributing gender pay differences to discrimination, arguing that these comparisons fail to take into account several contributing factors, but Warren is not one of them.
Warren said on last year's Equal Pay Day that the American workplace was "rigged against women" and called it a "national day of embarrassment" for the nation.

"Today is Equal Pay Day, and by the sound of it, you would think it's some sort of historic holiday commemorating the anniversary of a landmark day that our country guaranteed equal pay for women," Warren said. "But that's not what this is about. Not even close."

"The game is rigged against women and families, and it has to stop," Warren continued. "It is 2016, not 1916, and it's long past time to eliminate gender discrimination in the workplace."

Historically, 1995 was the last year where the national pay gap was comparable to the 2016 gap in Warren's office, according to data collected by the group that founded Equal Pay Day.

Warren is far from the only politician who pays women less than men.

Former President Barack Obama regularly spoke out about the gender pay gap, but women working at the White House were paid less than men.

Warren's office did not respond to inquiries regarding the disparity. 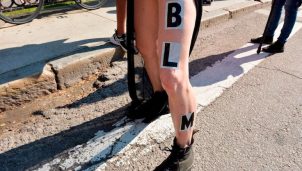