A Democratic alderman from Manchester, N.H. suggested at a recent committee meeting that he wants the government to create a program to get elderly people to leave their homes they can no longer afford, arguing the city "can't be run by the elderly."

Ald. Christopher Herbert (D.), who is also a New Hampshire state representative, made the comments during a meeting of the Joint Committee on Education on May 24. A video of the meeting was later posted to YouTube.

Herbert described his 85-year-old neighbor who cannot afford to stay at her house, saying that instead of offering her tax credits, the government should have a program to get her out of her home.

"I've got an 85-year-old woman that lives across the street, and, and she won't give up her house," Herbert said. "She's sitting on $350,000 and she can't afford it anymore, and you're saying give her a tax credit. No, we should have a program that gets her out of the house."

Herbert added that new people need to "occupy" those houses and the city cannot be run by the elderly.

"I mean, we need to get new people to come in and, and, occupy those houses. We can't be run by the elderly in a city—that, that, that's foolishness," Herbert said. "I mean, if you want to go do that you can go down to the communities outside of Orlando. And they have a lot of money."

Fellow Ald. Barbara Shaw responded to Herbert's comments by noting that she considers herself elderly and wants to keep her home.

"Well, I'm 75 years old, and I consider myself basically elderly, but I want to keep my house and I'm on a pension, a teaching pension," Shaw said.

Herbert has received blowback for his comments on his social media pages. The alderman defended himself and said people are mischaracterizing his words, arguing his comments were referring to a program to "help the elderly monetize their property without being taken advantage of by the private market." 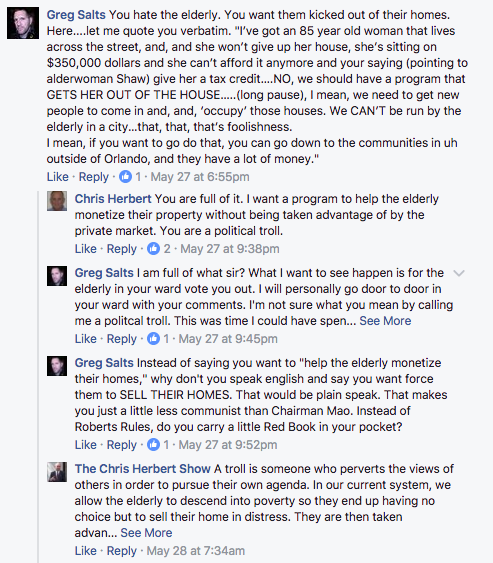 Herbert later apologized for his comments and said he did not express himself well.

Herbert is the alderman for Manchester's fourth ward and represents district 43 in New Hampshire's state legislature.