CNN on FCC Repealing Net Neutrality: ‘End of the Internet as We Know It’

CNN expressed alarm after the Federal Communications Commission voted on Thursday to repeal the Obama-era net neutrality rules, featuring a story on the front page of its website with the headline "End of the internet as we know it" that described the internet regulations as efforts to "keep the web open and fair."

The CNN article said that net neutrality rules—which the Obama administration put in place to classify internet service providers as public utilities, rather than information services, for the first time, giving the government broad regulatory power—"were intended to keep the internet open and fair."

CNN's report—which was later updated with a different headline, "Trump's FCC votes to repeal net neutrality"—included five quotes in favor of net neutrality and only one against the rules, from FCC chairman Ajit Pai. 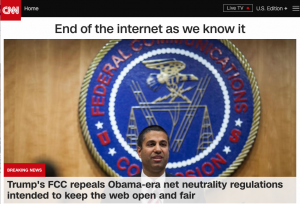 "Following detailed legal and economic analysis, as well as extensive examination of comments from consumers and stakeholders, the commission reversed the FCC's 2015 heavy-handed utility-style regulation of broadband internet access service, which imposed substantial costs on the entire internet ecosystem," the FCC said. "In place of that heavy-handed framework, the FCC is returning to the traditional light-touch framework that was in place until 2015."