American Jewish leaders took out a full-page advertisement in the New York Times on Thursday to thank President Donald Trump for his efforts to combat anti-Semitism across the globe and criticize Democrats for their open embrace of causes advocating the destruction of Israel.

The advertisement, signed by more than 50 leading American Jewish voices, comes on the heels of Trump appointing Elan Carr as the new State Department Special Envoy to Combat Anti-Semitism, a post that has become increasingly important in recent years as anti-Semitism and violence against Jews flourishes across the globe, particularly in Europe.

"Thank you, President Donald Trump and Secretary of State Mike Pompeo, for the appointment of Mr. Elan Carr as Special Envoy to Monitor and Combat Anti-Semitism," states the ad, which was purchased by the Republican Jewish Coalition.

"Anti-Semitism must be confronted and defeated," the advertisement declares. It also contains a direct quote from Trump in which he declares, "The scourge of anti-Semitism cannot be ignored, cannot be tolerated, and it cannot be allowed to continue." 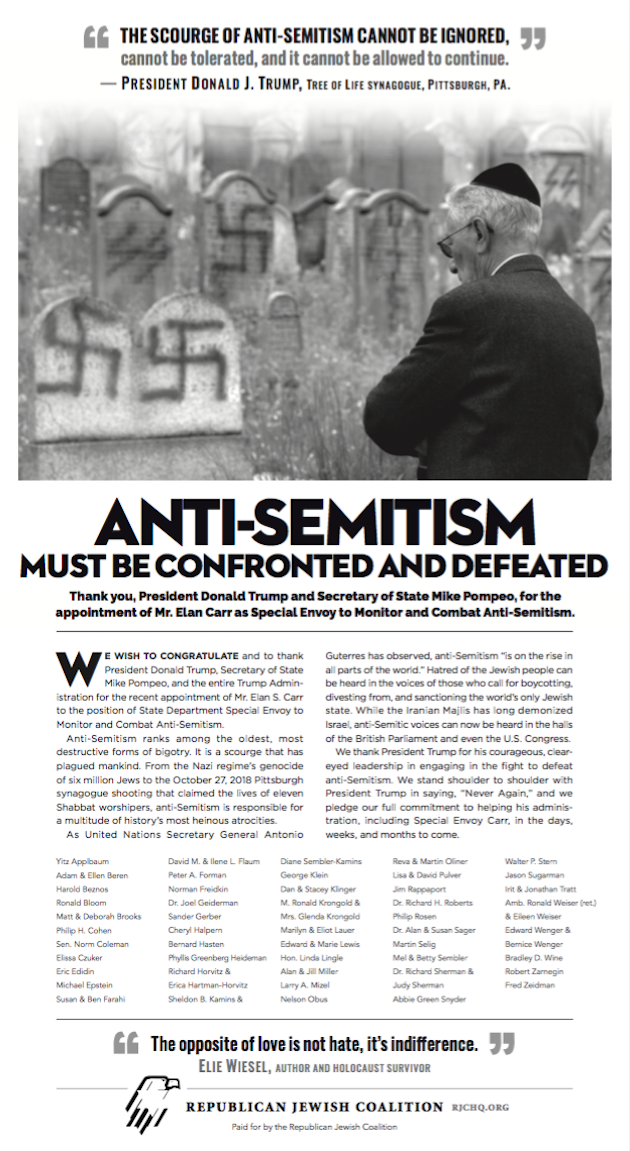 "We wish to congratulate and to thank President Donald Trump, Secretary of State Mike Pompeo, and the entire Trump administration for the recent appointment of Mr. Elan S. Carr to the position of State Department Special Envoy to Monitor and Combat Anti-Semitism. Anti-Semitism ranks among the oldest, most destructive forms of bigotry," the advertisement says.

"It is a scourge that has plagued mankind. From the Nazi regime's genocide of six million Jews to the October 27, 2018 Pittsburgh synagogue shooting that claimed the lives of eleven Shabbat worshipers, anti-Semitism is responsible for a multitude of history's most heinous atrocities," it continues.

"As United Nations Secretary General Antonio Guterres has observed, anti-Semitism ‘is on the rise in all parts of the world,'" the ad states. "Hatred of the Jewish people can be heard in the voices of those who call for boycotting, divesting from, and sanctioning the world's only Jewish state."

The leaders also criticize the Iranian regime for its anti-Semitic comments and calls out a new class of freshman Democrats who have advocated in favor of Israel boycotts.

"While the Iranian Majlis has long demonized Israel, anti-Semitic voices can now be heard in the halls of the British Parliament and even the U.S. Congress," the ad states. "We thank President Trump for his courageous, clear eyed leadership in engaging in the fight to defeat anti-Semitism. We stand shoulder to shoulder with President Trump in saying, ‘Never Again,' and we pledge our full commitment to helping his administration, including Special Envoy Carr, in the days, weeks, and months to come."