In the weeks before Election Day, Tiffany Smiley takes her campaign against Sen. Patty Murray on the road

The girls told the Senate hopeful they were homeless and living out of a car with their mother, who was inside trying to buy them something to eat. To Smiley, the family was a perfect example of how Democrats have failed the people of Washington.

Smiley's remarks came at the kickoff event for her statewide bus tour, the last leg of her campaign to unseat Sen. Patty Murray (D.), whose 30-year career in the upper chamber, Smiley says, has been long on promises but short on results. Smiley reminds voters that on Murray's watch, crime has spiked in Washington State, and the economy has tanked. 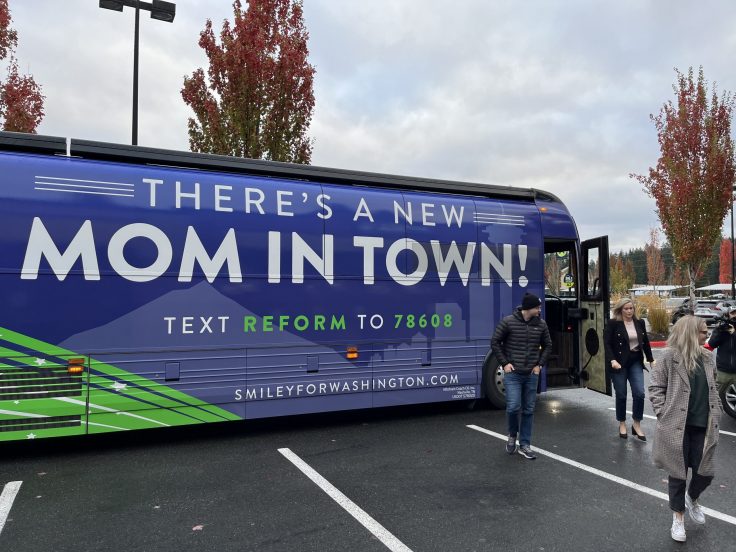 It's a message that resonates with Debbie Bussell, a retiree who lives in Covington. Bussell says inflation is "killing" her family and that she has to "put things back on the grocery shelves." Her husband, Kirk, said Christmas for their grandchildren was "going to be a little skinny this year." 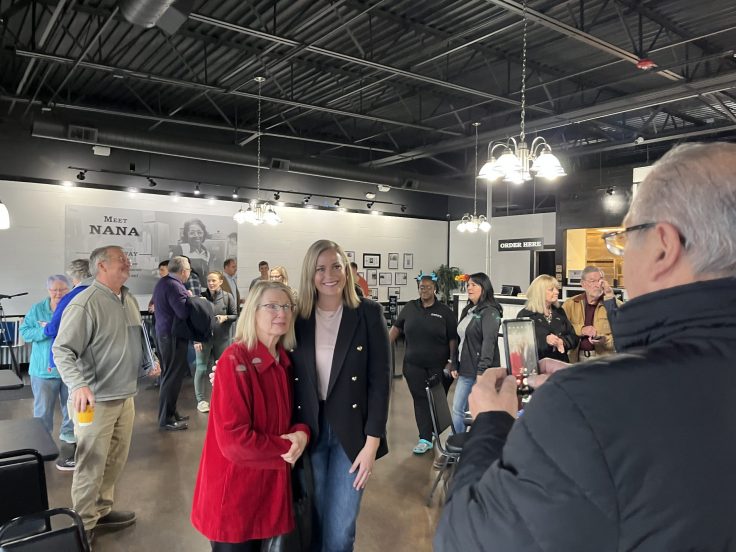 Born and raised in rural Washington, Smiley was working as a nurse in 2005 when her husband, Major Scotty Smiley, was severely injured and blinded by a suicide bomb in Iraq. Smiley quit her job to care for Scotty and became a full-time advocate for veterans and their caregivers. When she speaks to voters, Smiley says she wants to fight for Washington families as aggressively as she fought for Scotty after he returned from Iraq.

As far as she sees it, Washington needs a fighter. After leaving for another stop in Issaquah, Smiley told the Washington Free Beacon that a woman had approached her to say she doesn't even feel safe pumping gas by herself and asks her husband to go instead.

Smiley blamed President Joe Biden, his "border czar" Vice President Kamala Harris, and Murray for allowing fentanyl to flow freely into the Pacific Northwest. "Every room I go into in Washington State, someone is affected by it," she said. Harris on Wednesday visited a Murray fundraiser in Seattle and announced a $1 billion grant from the infrastructure bill to put toward electric school buses in the state.

"This administration doesn't acknowledge there’s a problem," said Tony Pinto, a businessman who attended the event with his wife. "So it's pretty hard to solve anything."

As a featured guest, Sen. Joni Ernst (R., Iowa) told the crowd that Murray's legislative record has been particularly marked by inaction.

"In eight years, I have had 43 bills—that I have authored and sponsored—signed into law by the three different presidential administrations," Ernst told a packed house at the Red Dog Saloon in Maple Valley. "Patty Murray's been there how long? Thirty years. How many bills has she had signed into law? Nine."

Smiley outraised Murray in the last quarter by more than $3 million and in October has closed the polling gap to within 8 points. Some polls show a statistical tie. With Murray's support dipping below 50 percent, the race is raising concerns among Democrats and their allies that Smiley could pull out a sleeper victory in the liberal stronghold.

Smiley's tough-on-crime messaging and readiness to confront political gridlock is making inroads with voters outside the GOP. An October SurveyUSA poll found the Republican outperforming Murray by 16 points with independents and 15 points with Hispanics. In a recent campaign ad, even Democrats and former Murray voters say they've had enough of the incumbent.

Camron Barth, a 36-year-old independent from Renton, told the Free Beacon his top concerns are lack of support for police and inflation.

"As a 911 dispatcher, I can attest to the fact that crime is not just in the urban areas. It's also in the suburbs," Barth said. "Inflation is up. It's crushing middle-class families and working-class families."

"Patty Murray and her ilk have run this country very poorly in the last two years," said Matthew Lifshaz, a 23-year-old independent.

Murray's campaign has spent millions of dollars attacking Smiley as a candidate who poses a threat to democracy, painting her as an ally of former president Donald Trump. That hasn't stopped Murray from also comparing Smiley to Trump's enemies, including Senate Minority Leader Mitch McConnell (R., Ky.). During Sunday's debate, Murray scoffed when Smiley said she would support a federal law codifying same-sex marriage.

"I feel like I'm listening to Mitch McConnell on the Senate floor," Murray quipped, drawing scattered laughs from the crowd at Gonzaga University.

The tactic might not be as effective as she hopes. Barth said he's drawn to Smiley because he believes she does back protections for same-sex marriage.

"I'm openly gay," he said, "and I appreciate that Tiffany Smiley is what I call a 21st century Republican."