Brock in September bombarded voters in the state's northern suburbs with an unsolicited "Virginia edition" of his liberal media outlet, The American Independent, photos obtained by the Washington Free Beacon show. The 11-page mailer—which is designed to look like a local newspaper—includes misleading content that echoes Democratic gubernatorial hopeful Terry McAuliffe's campaign messaging.

One page, for example, falsely says Youngkin's plan to "eliminate the state's income tax" would cut funding for public schools. Just days before Brock sent the mailer, McAuliffe made the same false claim during a debate against the Republican nominee. The mailer's front page, meanwhile, says Youngkin referred to COVID relief as "unnecessary"—a claim PolitiFact rated "mostly false." Brock called "misinformation" an "existential threat to democracy" in a 2016 interview with former CBS News anchor Dan Rather, whose career ended after he used fake documents to claim then-candidate George W. Bush went AWOL while serving in the Texas National Guard. 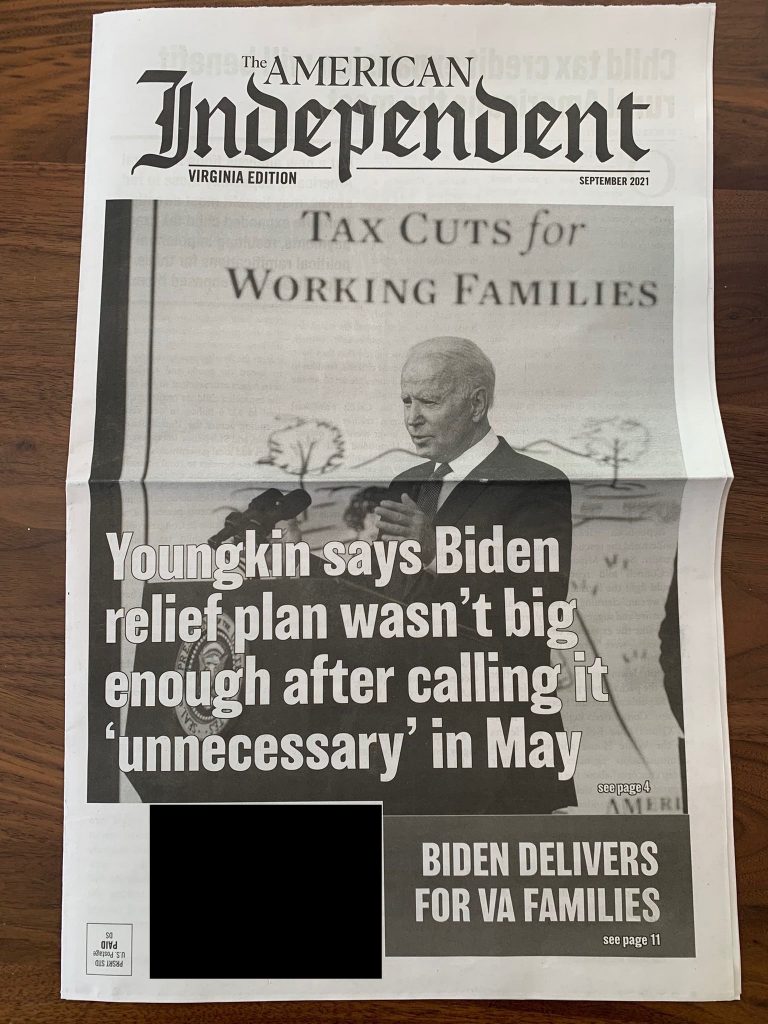 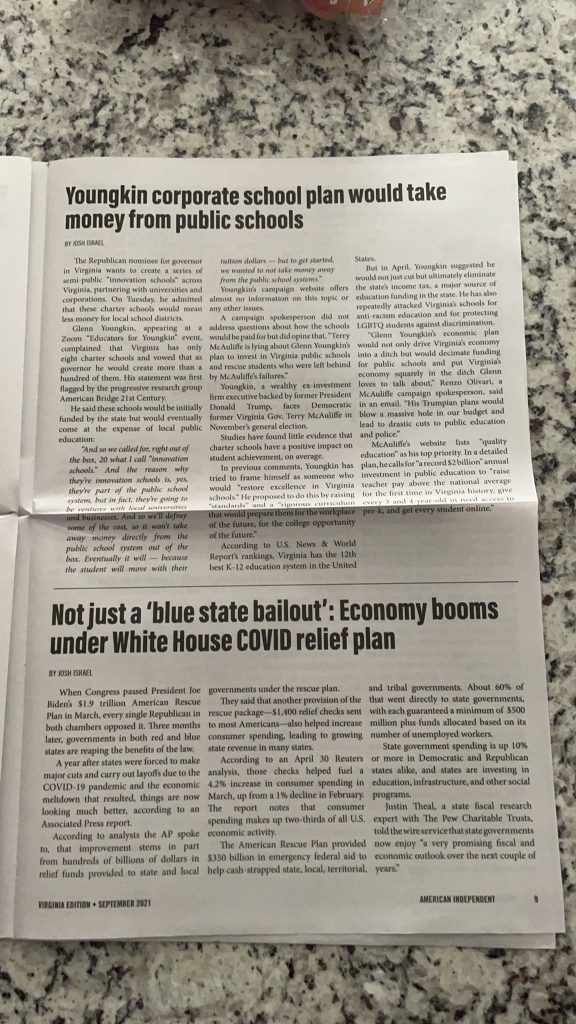 The mailers mark the latest attempt by a well-funded liberal group to influence elections with fake news. Liberal activist Tara McGowan launched Courier Newsroom in 2019 through her dark money group, ACRONYM. The media company aims to "build nimble communications infrastructure for Dems in critical states," an internal memo obtained by Vice states. The Center for Responsive Politics admonished both Courier and The American Independent in a 2020 article, which referred to the sites as "pseudo-news outlets"  that are "pouring millions of ‘dark money' dollars into ads and digital content masquerading as news to influence" elections.

Brock's mailers sparked concern among ethics experts. Traditional political groups are required to "disclose who they are and where their funding comes from" when they spend "more than $1,000 to influence an election," Foundation for Accountability and Civic Trust executive director Kendra Arnold told the Free Beacon. But that law does not apply to a "progressive news" outlet such as The American Independent, which has received millions of dollars from dark money sources.

"This is a new legal issue, and there is some gray area on what precisely constitutes a legitimate media outlet in the context of political spending, but in this particular case it does appear to be pushing the limits," Arnold said.

One Virginia voter who got The American Independent‘s "Virginia edition" told the Free Beacon she "never signed up to receive these mailers."

"At first glance, it looked like a normal neighborhood newsletter, but once you start reading it the bias was very clear," the voter said. "It's pretty sad McAuliffe's allies are resorting to literal fake news to try and con voters."

Brock's mailers came as McAuliffe struggled to maintain a strong lead against Youngkin in a state President Joe Biden won by double digits. A September Fox News poll showed McAuliffe leading Youngkin by just 4 points. Voters have until Oct. 12 to register to vote in the election, which will take place on Nov. 2.