California Dem made up to $200,000 on lucrative rental property he claimed as his residence

Cox bought the Bethesda, Md., home for $1.05 million in 2016 as a place for his wife to live while studying at Johns Hopkins University. Under Maryland law, nonresidents claiming a property as their primary residence must live in the property for at least two of the last five years. According to his campaign, Cox never lived in the home himself, and his wife moved back to California just one year after purchasing the property, meaning the Democrat could not have met the state's requirement.

Cox's declaration was made under penalty of perjury when he sold the home in November 2019. The claim allowed him to avoid a nearly $90,000 tax withholding levied on property sales made by nonresidents in Maryland. Cox sold the home for $1.12 million after reporting between $80,000 and $200,000 in rental income from the property between 2017 and 2019.

Cox previously claimed two homes—one in California and the one in Maryland—as his primary residence in 2016, 2017, and 2018, which violates federal tax law. His campaign initially blamed the blunder on Maryland, telling the Fresno Bee in 2018 that the state "automatically marked the home as Cox's principal residence." He then called it an "honest mistake" after documents revealed that he personally signed the deed, claiming he "filled out the principal residence not knowing the legal definition."

Despite saying he was aware of the violations, Cox again claimed the Maryland home as his primary residence in a 2019 deed issued after he sold the property, according to documents obtained by the Free Beacon. The form used to declare primary residence in Maryland is not required when selling property in the state—it must be requested at least 21 days prior to closing. 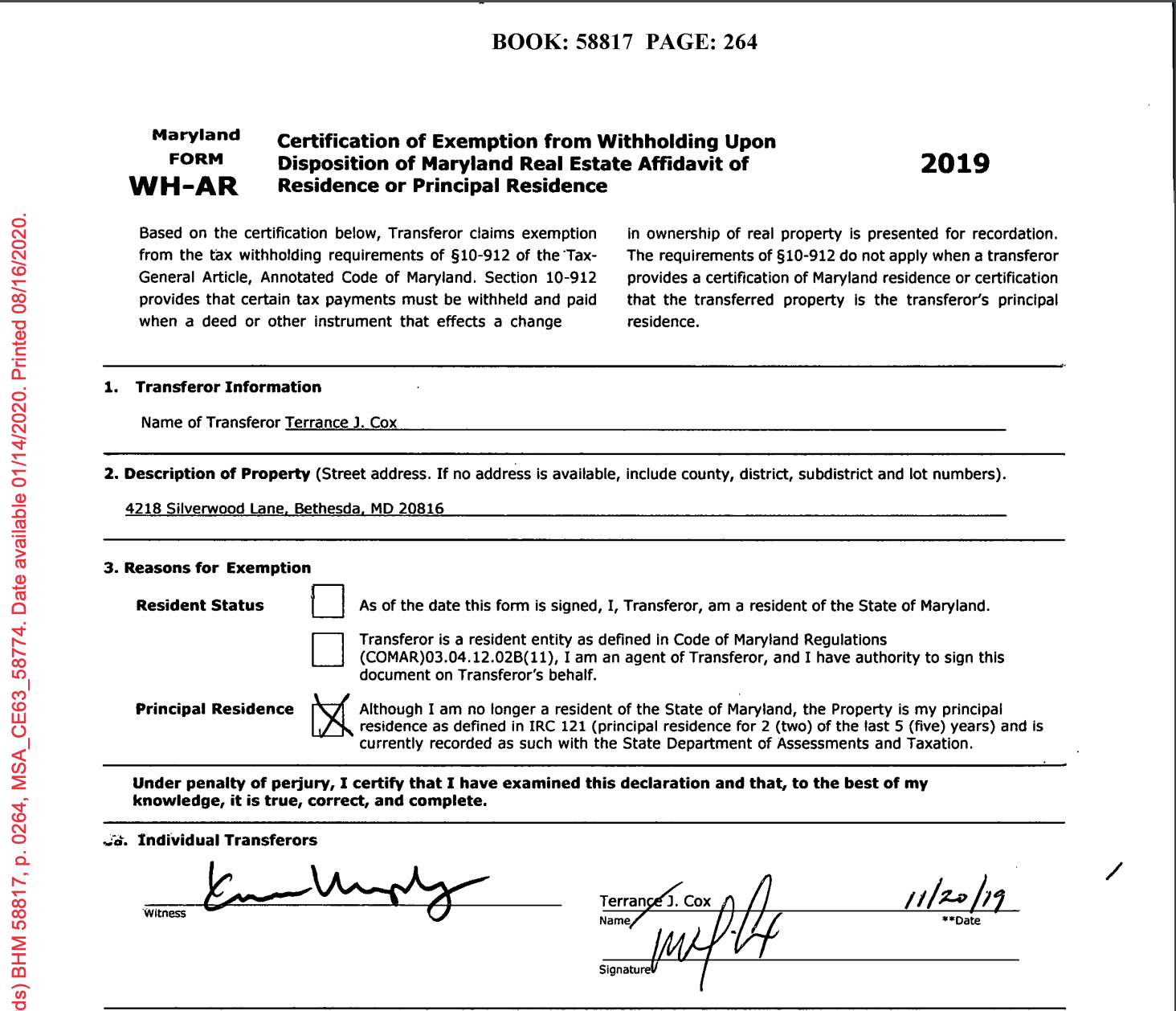 Cox did not respond to a request for comment.

Maryland's tax department told the Free Beacon that principal residence claims are "accepted by each title company closing such a transaction" and filed with the county. Montgomery County—where Cox purchased the home—does not usually work to verify such claims but may investigate if residents bring attention to potential misuse. Cox's title company did not return a request for comment.

Cox has been embroiled in financial scandals since launching his congressional campaign in 2017. The IRS filed liens against the Democrat in January showing $145,000 in unpaid federal income taxes for 2016 and 2017. The state of California went on to hit Cox with a new lien listing an additional $30,000 in unpaid 2017 taxes just weeks later. Cox loaned his campaign more than $250,000 from July 2017 to March 2018 while failing to pay his taxes in full.

In addition, Cox in 2017 was forced to pay $48,000 in unpaid income taxes dating back to 2015. The Democrat blamed the lien on the IRS, claiming he was the victim of "bureaucratic incompetence" as his "check was stuck on the back of somebody else's payment." Cox has also faced multiple liens against his businesses.

Cox in March voted to block a bill requiring members of Congress to disclose tax liens, sparking a rebuke from Republican David Valadao's campaign, which accused the Democrat of "using his vote in Congress to protect himself."

Cox defeated Valadao by just 862 votes—less than 1 percent—in 2018. The pair will now face off again in November. Valadao in March received 50 percent of the vote to Cox's 39 percent under California's open primary system, which advances the two candidates with the most votes to the general election regardless of party. Cox has outraised Valadao by roughly $750,000 but has a much narrower cash-on-hand advantage, holding more than $1.9 million to Valadao's $1.8 million as of June 30.