Less than two weeks before Montana governor Steve Bullock assured voters that his Senate campaign would take a backseat to the state's coronavirus response, the Democrat joined a private fundraiser with a corporate-backed PAC during official work hours.

According to an invitation obtained by the Washington Free Beacon, Bullock attended a Moderate Democrats PAC fundraiser on April 17 from 8:30 to 9:30 a.m. MST. The event—which was open to the PAC's "Trustees and Executive Members" only—occurred while Montana was in statewide lockdown due to the virus. Bullock went on to extend his stay-at-home order on April 24.

Less than two weeks after the fundraiser, Bullock claimed that his last-minute bid to unseat GOP Sen. Steve Daines would not take priority over his pandemic response.

"I look forward to when I can spend more time thinking about the campaign and doing that work," he told the Associated Press, adding that he's focused on making sure "lives are being saved." Bullock also attended a fundraiser hosted by Sen. Kamala Harris (D., Calif.) on April 21.

The revelation could undermine Bullock's ability to campaign on his coronavirus response. While the Democrat's handling of the pandemic garnered him a 70 percent approval rating in a May Montana State University poll, Bullock has come under fire in recent weeks for politicizing the virus. A June Fox News report showed that he filled his coronavirus task force with multiple big-money donors who then made recommendations on how to allocate more than $1 billion in federal stimulus aid.

The Bullock campaign did not respond to a request for comment.

In addition to calling into question his priorities as governor, Bullock's presence at the private fundraiser diminishes his positioning as a campaign finance purist. While Bullock has pledged to "take no corporate PAC money," 64 percent of Moderate Democrats PAC's funds in the 2020 cycle—more than $522,000—came from corporate sources. Major donors include Citigroup, Boeing, Lockheed Martin, and ExxonMobil.

"This is yet another example of how Governor Bullock says one thing but does the other. He promised not to take corporate PAC money yet backdoors these corporate dollars into his campaign," a Montana GOP spokesperson told the Free Beacon. "As long as Bullock gets to have it both ways, he will continue to mislead and misrepresent himself to Montanans."

Bullock has also benefited from $700,000 in ads targeting Daines from Schumer's Senate Majority PAC, which accepts millions from corporate PACs and big-money liberal donors. In addition, liberal dark money group Protect Our Care announced a $250,000 ad campaign supporting Bullock in March. The group is an affiliate of dark money juggernaut Arabella Advisors, which spent $600 million backing Democrats in 2018 without revealing the source of its funds.

After repeatedly dismissing a Senate run during his failed presidential bid, Bullock launched his campaign in March. The decision came following closed-door meetings with Senate Minority Leader Chuck Schumer (D., N.Y.) and former president Barack Obama. According to former Montana Democratic senator Max Baucus, Bullock's meeting with Schumer was "key to the decision" to run. Bullock claimed in his campaign's first TV ad, however, that he "won't answer to party bosses."

Bullock's entry in the race against Daines bolstered Democratic hopes to flip the Trump-won state in November. The nonpartisan Cook Political Report currently rates the race a "toss up." 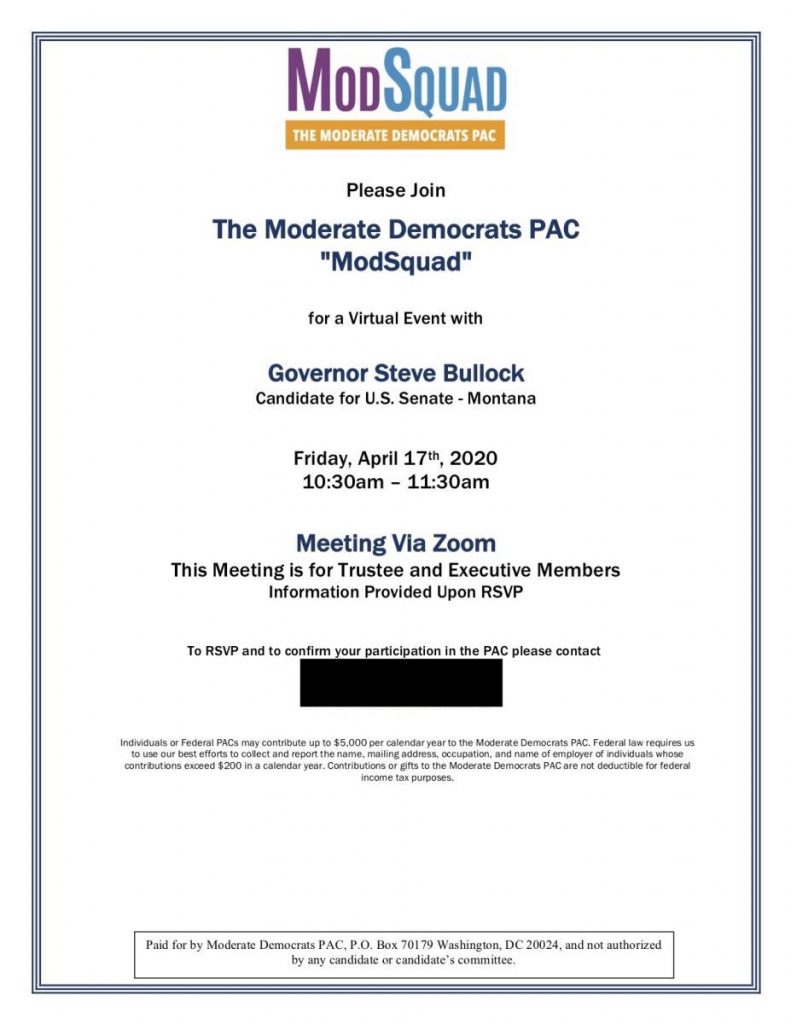