With the election looming, 2020 became the all-time best year for gun sales in American history.

More than 16.5 million guns were sold through the month of October, according to a Washington Free Beacon analysis of FBI data released on Monday. That's about 1.6 million more than all of 2016—the previous record holder. It also represents four million more sales than in 2019—an increase of over 33 percent. The National Shooting Sports Foundation (NSSF), the gun industry's trade group, also estimated nearly seven million people purchased a gun for the first time between January and October. 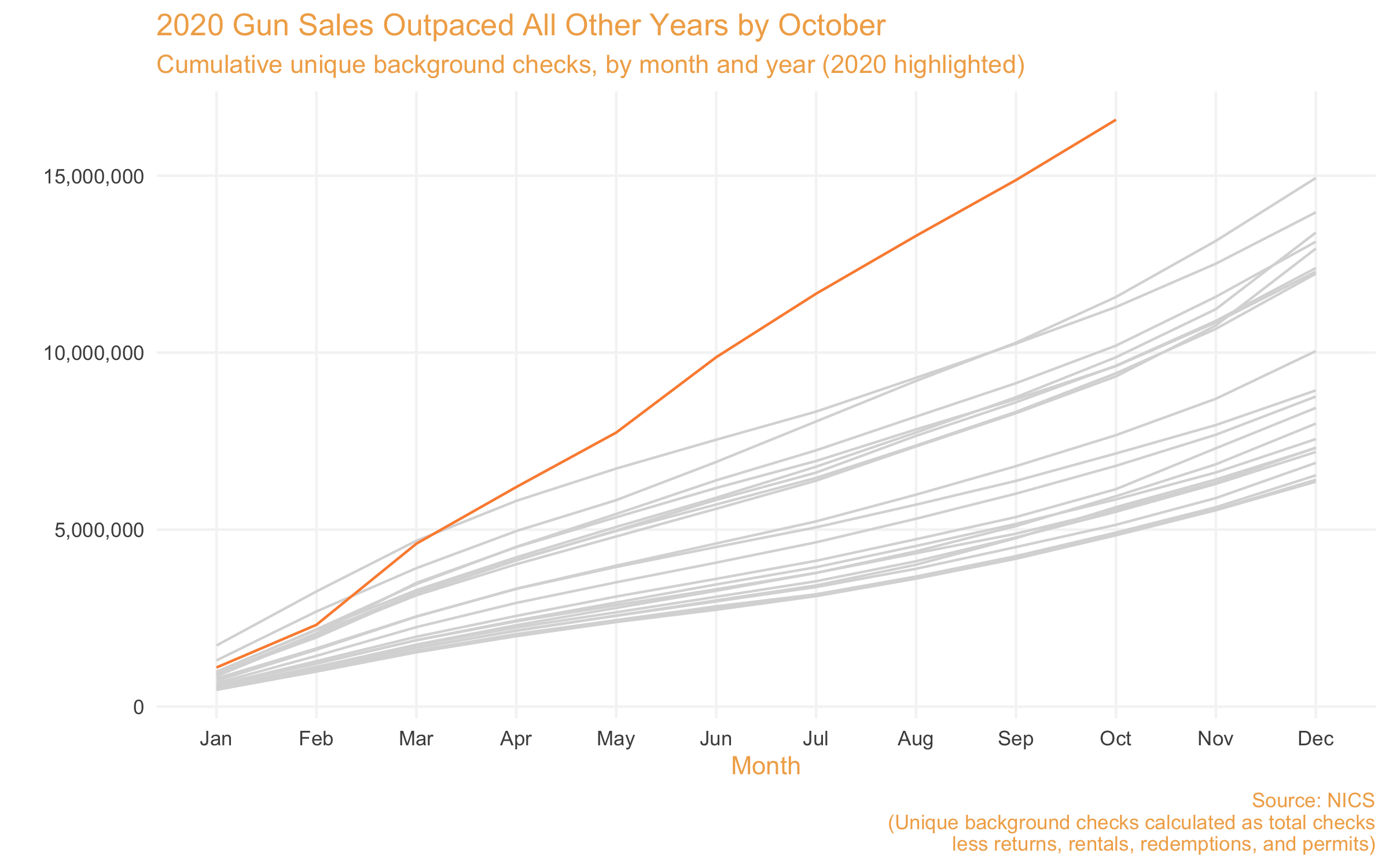 The record sales come during a year in which Americans have faced a pandemic, economic downturn, prisoner releases, racial tension, and rioting. Those factors, as well as a contentious presidential election, have driven sales throughout the year, according to industry experts. And those gun sales—especially to new owners—are now likely to drive votes.

"This much is clear as we head into Election Day: Americans of all political persuasions are exercising their Second Amendment right to keep and bear arms and doing so in record numbers," NSSF spokesman Mark Oliva said in a statement.

As in 2016, it is likely the stark contrast between gun policies offered by President Donald Trump and challenger Joe Biden will motivate gun owners to vote. Oliva said gun owners will be motivated to turn out because of Democrats' embrace of far-left gun-control measures. Biden has expressed support for gun bans, while vice presidential candidate and California senator Kamala Harris previously endorsed gun confiscation.

"It cannot be discounted that today's gun buyers are faced with polar opposites of presidential candidates when it comes to protecting Second Amendment rights," Oliva said. "President Donald Trump vowed to safeguard this right and former vice president Joe Biden and his running mate, Senator Kamala Harris, have both embraced outright confiscation of lawfully owned firearms as the headliner of the most far-reaching gun-control agenda to be presented to the American voter."

Oliva argued the surge in sales was evidence that Americans were already showing their disinterest in new gun-control policies. He said October 2020 saw the most sales of any October on record—a trend that has continued for seven months.

"America is watching and is already voting with their wallets when it comes to lawful firearm ownership," he said. "This has been a sustained period of firearm sales since March. This is clearly not a one-off event."

He expects the record pace to continue as November and December have historically been the busiest months for gun sales.