Rep. Rashida Tlaib (D., Mich.) on Wednesday shared a tweet that advertised a fundraiser for an organization with ties to Hamas and the Taliban.

Tlaib, who has a long history of anti-Semitic rhetoric, retweeted a post from critical race theorist Khaled Beydoun that urged donations to Baitulmaal, a Texas-based nonprofit. Experts say Baitulmaal helps fundraise for Hamas and distributes aid to the "families of martyrs of the Palestinian people." And the group's leader, Mazen Mokhtar, has been accused of working with the Taliban and other terrorist groups. 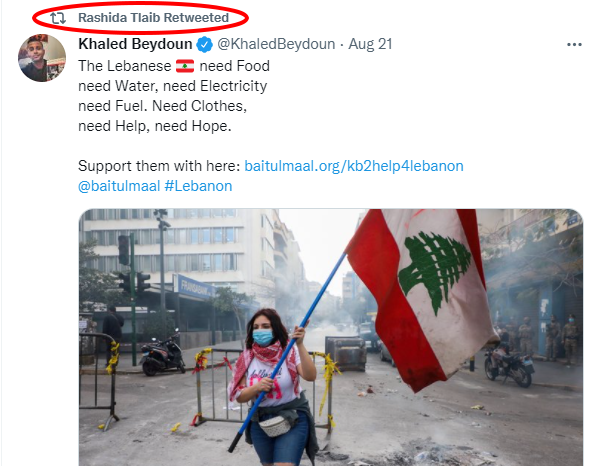 The retweet isn't the first time Tlaib expressed support for terrorists. Days after she became a congresswoman, the controversial Democrat hosted Abbas Hamideh, a pro-Hezbollah activist who has repeatedly compared Israelis to Nazis. She shared a post last year that included an anti-Semitic phrase frequently used by Palestinian terrorist groups that seek to destroy Israel. She subsequently unshared the post.

Baitulmaal works closely with Hamas terrorists in the Gaza Strip, according to a 2020 analysis by the Middle East Forum. The group, which received $10,000 in emergency coronavirus funding last year, frequently partners with Unlimited Friends Association for Social Development, a Palestinian group that describes itself as a "a social, developmental, educational NGO."

The association, which lists Baitulmaal on its website's partners and donors page, is openly hostile towards Israel. The group's Facebook page contains references to "the filth of the most dirty Jews" and "Nazi Zionist jails." The association also partners with Islamic Relief, a group with which the State Department cut ties this year because of "anti-Semitism exhibited repeatedly" by its leaders.

In 2004, federal agents in Connecticut investigated Mokhtar for running a website that "solicited funds for the Taliban and Chechen mujahideen." Mokhtar was not convicted. Three years later, he was arrested on a multi-count indictment for filing false tax returns. The lead prosecutor was former New Jersey governor Chris Christie (R.).

Baitulmaal also partners with West Bank-based Hamas organizations. The organization hosted a 2008 fundraiser for the Yazour Medical Clinic in Nablus, an offshoot of Hamas. One Palestinian newspaper reports that Baitulmaal and the Hamas offshoot have been working together "for years."

Tlaib and Baitulmaal did not respond to requests for comment.