A New York House candidate under fire for endorsing the anti-Israel boycott movement attempted damage control by posing for a photo surrounded by Jewish foods on Thursday.

Democratic candidate Yuh-Line Niou retweeted, and then later deleted, a snap of her holding a loaf of Challah bread while sitting next to bottles of Israeli Coca-Cola, an Israeli-made SodaStream, and stacks of Jewish prayer books.

Niou praised the bread effusively in a Twitter post, saying it was the "[b]est challah I’ve had in a long long time."

"Heated in the oven just a bit to make it like fresh. Double butter is right!!!" she wrote. "Best challah I've had in a long long time. I couldn’t even put into words how perfect the inside was. Perfect crust. Soft with just a little density. Miriam also put some toppings on. Dreams." 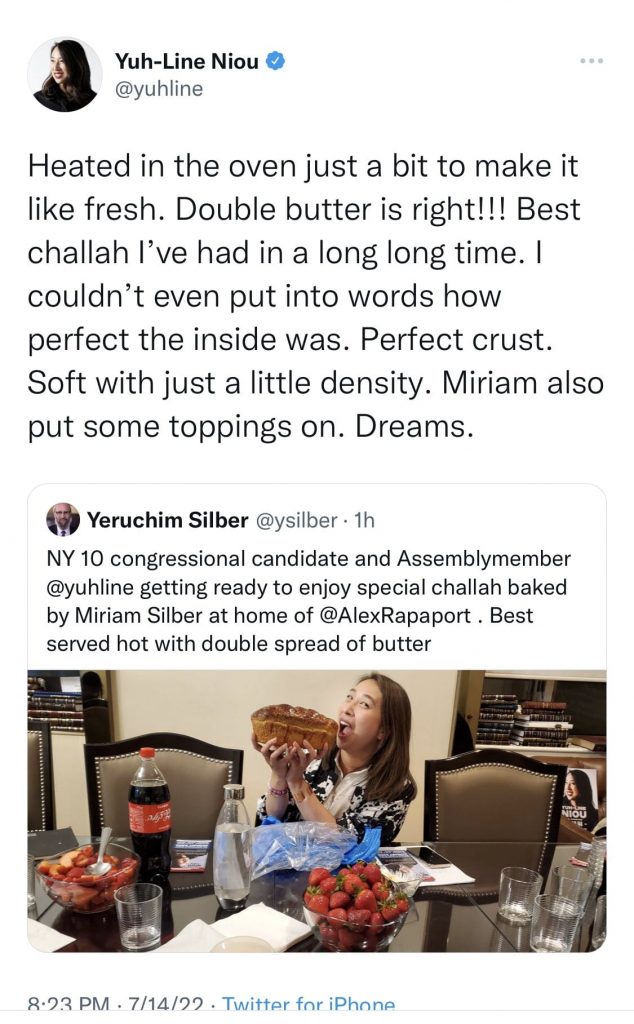 Political leaders and members of the Jewish community objected to the photo and described it as an attempt by Niou to "challah-wash" her anti-Israel position. The post came just days after Niou expressed support for the Boycott, Divestment, and Sanctions movement, which seeks to wage economic and political warfare on Israel.

"Well that picture is ridiculous. It looks like a grotesque parody of an anti-Semite demonstrating her love of the Jews. It’s like ‘jewwashing,’" said Seth Barron, managing editor of the American Mind.

Niou did not respond to a request for comment.

The photo was originally posted by the government affairs director for Agudath Israel of America, a leading umbrella group for Haredi Orthodox Jews, who said he met with Niou to urge her to reconsider her position on BDS.

Niou’s support for the BDS movement drew sharp criticism from the pro-Israel community and political leaders in her own party.

"I believe in the right to protest as a fundamental tenet of western democracy, so I do support BDS," she told Jewish Insider in an email.

Niou’s position was slammed by her House opponent and former mayor Bill de Blasio, who called the BDS movement "unacceptable," and by New York Democratic Party chairman Jay Jacobs, who said it was "offensive" and "shows a lack of understanding of the region."