A drag queen, a communist, and a domestic terrorist rally support for San Francisco's radical DA as recall looms

SAN FRANCISCO — A drag queen, a communist, and a domestic terrorist walk into a bar. They are joined by several dozen supporters of Chesa Boudin, the radical district attorney who faces a recall election on Tuesday. The mood is lively despite recent polling indicating a majority of the city's voters want him gone.

Juanita MORE!, the drag queen activist and "denizen of the limelight," is first to arrive at Zeitgeist, the "unapologetically punk dive" and beer garden in the city's Mission District. MORE! could be in the running to be named the inaugural drag laureate of San Francisco, an official position created days earlier by Mayor London Breed (D.).

Angela Davis, the former FBI most-wanted fugitive and Communist Party vice-presidential candidate whose other accolades include the Soviet Union's Lenin Peace Prize, takes a seat in the back with her assistant. A Washington Free Beacon reporter is among those instructed by Boudin aides to prevent overeager admirers from pestering Davis, who recently returned from a gig in Denmark where she had been invited to lecture the Danes about their role in promoting "racial capitalism."

The demographics of the crowd are about what you'd expect: boomer hippies, dirtbag leftists, trust fund kids, weirdos. Gilbert and Davis chat in the beer garden until she is called to the microphone to rally the faithful. Like most San Francisco residents, they're wearing face masks outside. 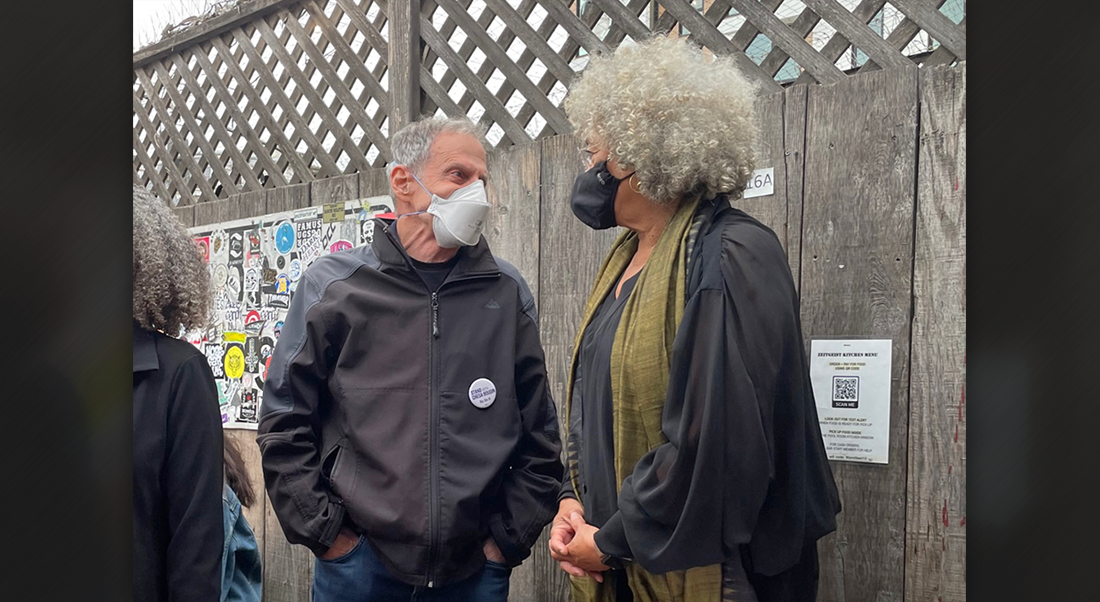 "I am convinced that we are the majority," Davis says toward the end of a low-energy speech before she is hustled off to another scheduled appearance. A poll conducted days earlier for the San Francisco Examiner suggests otherwise: 56 percent of likely voters favor recalling Boudin, while 62 percent disapprove of his job performance as district attorney. "Barring a literal miracle, Boudin is done," writes Gil Duran, the paper's editorial page editor.

The district attorney takes the stage and phones it in. Whereas most left-wing radicals are at least somewhat charismatic, Boudin is just another boring nerd, a Marxist Mitt Romney. His admirers in the local and national media may describe him as "a potential left-wing superstar," but he'll never be accepted into the Squad. "One of the reasons I know we're going to win is that my wife Valerie told me that a long time ago and she's never wrong," the politician yucks.

"There's a lot of pundits, a lot of journalists who think they know it all, who are telling us that it's over," Boudin says. This elicits a few angry boos and one emphatic "Fuck them!" That's about as punk rock as it gets. He goes on to denounce the recall effort, spearheaded by the former chairwoman of the San Francisco Democratic Party, as the work of "Republican billionaires." He boasts of talking to voters in Spanish, a language he mastered while working as a translator for Venezuelan dictator Hugo Chávez, and touts an internal poll showing the race tied at 47 percent. He has one simple question: "Are we gonna win?"

Many of Nancy Pelosi's constituents are hoping the answer is no. Breed, the city's Democratic mayor, is probably one of them, even though she won't come out and say it. She has been feuding with Boudin since late last year, when the district attorney opposed her efforts to be "less tolerant of all the bullshit that has destroyed our city," where burglaries are up almost 50 percent since 2019. Mary Jung, the lifelong Democrat leading the recall effort, last year celebrated the birth of her granddaughter amid a spate of anti-Asian hate crimes and worried it wasn't safe to go out for walks with the stroller.

San Francisco certainly doesn't feel very safe. Walking south from Tenderloin to City Hall in broad daylight, you will encounter an array of drug dealers and eventually lose count of all the people openly lighting up or tying off or passed out in the middle of the sidewalk. You'll see tent encampments in practically every side street and alley. Garbage and filth everywhere. (Maybe that's why everyone wears a mask outside.) You'll try to convince yourself that San Franciscans are just unusually negligent about picking up after their large dogs.

Boudin's defenders seem to think that because most of the city's problems predate his election in 2019, it would be unreasonable for voters to conclude he's not the right Democrat to fix them, or to question his radical approach to criminal justice reform, which critics argue has been too accommodating of actual criminals at the expense of victims. A major catalyst for the recall effort was the case of Troy McAlister, a serial criminal who killed two women while driving drunk in a stolen vehicle on New Year's Eve in 2020. McAlister was free after Boudin's office in April of that year negotiated a plea deal on an armed robbery charge, even though he had been arrested multiple times afterwards, including for car theft just days before the fatal crash.

"That was the last straw," says Richie Greenberg, an activist who spearheaded an earlier unsuccessful campaign to recall Boudin. "He should have resigned. It would have spared the city all of this mess." Even in a progressive bastion such as San Francisco, Boudin is "not even on the spectrum" in terms of what voters are willing to tolerate, Greenberg tells the Free Beacon during an interview at a coffee shop near the sprawling homeless assemblage and open-air drug carnival outside the U.S. Health and Human Services building at United Nations Plaza. "The majority of San Franciscans are just horrified by what we have been subjected to and why we're saying we have to stop this."