Boudin's policy changes left killer of two on the streets

Troy McAllister hit and killed 60-year-old Elizabeth Platt and 27-year-old Hanako Abe while drunkenly driving a stolen vehicle through a red light last week. McAllister was out on a plea agreement for robbery issued in April and had been arrested multiple times since, including a Dec. 20 arrest for car theft.

But none of those arrests led to prosecution and incarceration, thanks to Boudin's soft-touch prosecutorial practices. The progressive D.A. made his refusal to charge even serial offenders like McAllister for nonviolent offenses a hallmark of his campaign—a position he may now be reevaluating.

Boudin charged McAllister with manslaughter and promised changes after a "heart-wrenching" meeting with Hanako's mother Hiroko Abe, who has spoken out in the wake of her daughter's death. But the San Francisco D.A.'s prior inaction may still come back to bite him, as he faces a recall effort and harsh criticism from the city's police union.

The response mirrors growing criticism of other progressive prosecutors from both law enforcement and the public. Abe and Platt's deaths may ultimately serve as a referendum not only on Boudin's reforms but also on a reform agenda increasingly at odds with a public wary of public disorder and crime.

Boudin's progressive pedigree has distinguished him even among other reformist district attorneys, such as his predecessor, George Gascón, who is now the Los Angeles D.A. That's due in part to a hard-left upbringing: Boudin's parents were members of the left-wing radical group Weather Underground, and both were convicted of felony murder for their involvement with the organization. Before running for district attorney, Boudin served as a San Francisco public defender and worked for Venezuelan dictator Hugo Chávez.

That past carried over into Boudin's campaign platform, which included promises to end quality-of-life prosecutions in a city notorious for public disorder, litter, and vagrancy. Since taking office, he has delivered on many of those promises—ending cash bail, prohibiting the use of "three strikes" life and gang-enhancement charges, and prohibiting evidence obtained in stop-and-frisk searches from leading to prosecutions. 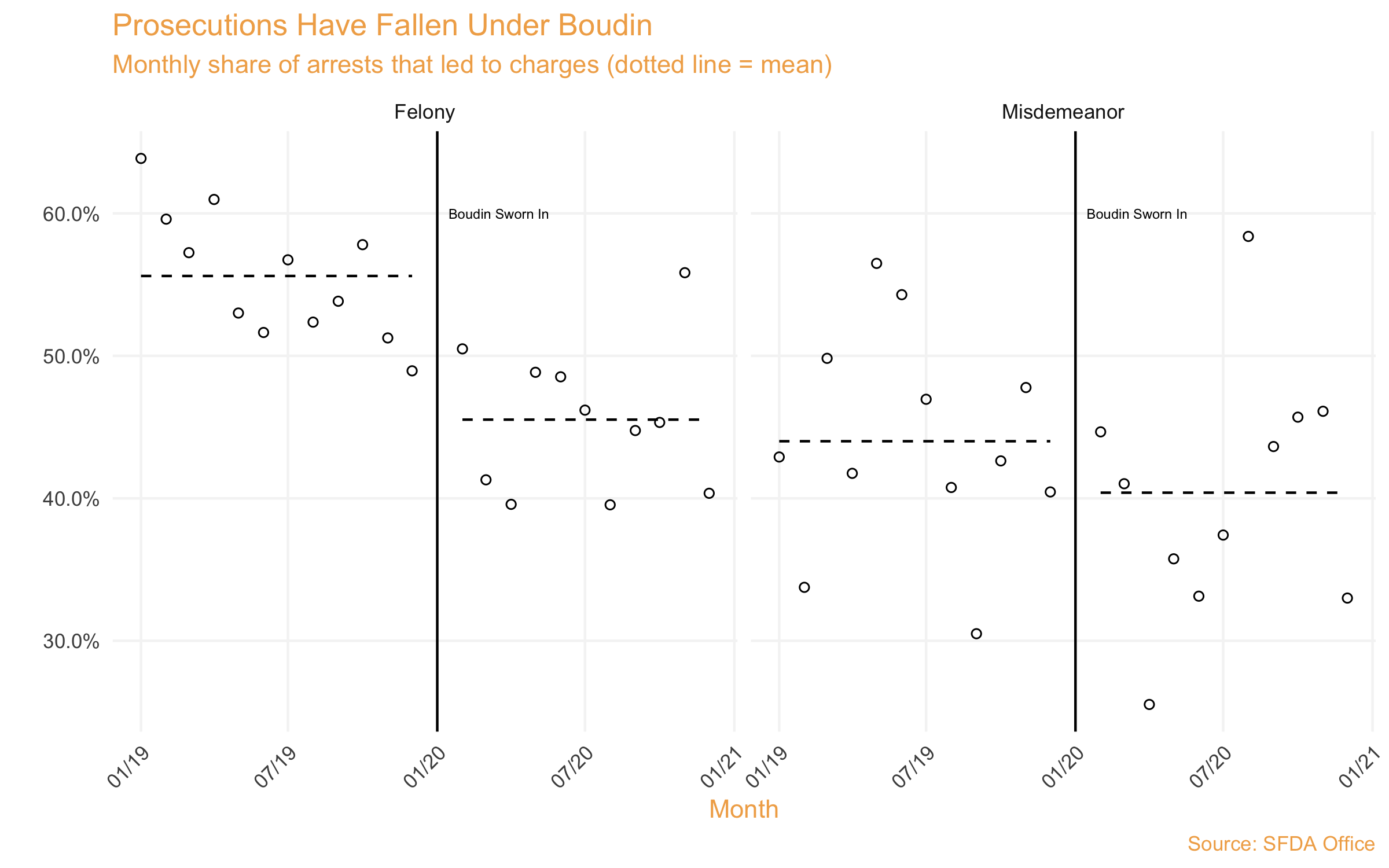 These reforms have led to a precipitous drop in the share of arrests that result in prosecution, with the average share of felony arrests prosecuted falling 11 percentage points since Boudin took office. That has in turn meant falling jail populations—and more serial offenders like McAllister out on the street.

Boudin's crusading has already attracted the ire of law enforcement, with the San Francisco Police Officers Association describing him as a "a clear and present danger to the law-abiding residents, businesses and visitors of San Francisco" and claiming that "we are all going to pay a steep price for his absurd policies."

The association has called for an independent investigation into the incident. Boudin has drawn fire from other law-enforcement officials: Sacramento district attorney Anne Marie Schubert pinned the blame on his past as a public defender who "side[s] with criminals and not victims." And thousands of San Franciscans have already signed a recall petition whose author said that Boudin's term has led to a "systematic dismantling and removing any semblance of criminal justice."

"You shouldn't be surprised that after announcing your intentions as a prosecutor are to lower incarceration rates and to ignore some crimes completely that you're going to be severely criticized when an event such as this happens," Jackson said. "I think this situation is both a preview of the condemnation Boudin is going to receive whenever there's a high-profile crime and of an increase in crime itself."

The rising criticism of Boudin mirrors troubles other progressive prosecutors are facing. Gascón is now under legal fire from his own deputy district attorneys after he implemented similar reforms, changes that the deputies' union claims are illegal. Philadelphia's Larry Krasner, meanwhile, has feuded with federal law enforcement, who blame him for a standoff between the police and an armed gunman.

Each of these clashes has taken place in the context of rising homicide and assault rates in the nation's largest cities. Murder rose in 51 of the nation's 57 largest cities last year, data show, with 37 seeing a spike of 30 percent or more. That violence has been linked to spikes in anti-police sentiment—a potent combination that may temper enthusiasm for Boudin, Gascón, and other district attorneys' reform project.