Shooting a Chrome .50 Cal Machine Gun on the Vegas Strip

Not long ago, on a summer afternoon, I found myself in Las Vegas with nothing much to do.

My flight back home wasn't until the next day. The $20 I was willing to throw away on gambling didn't last as long, so I needed something to do.

Luckily, over the last decade or so, Las Vegas has become the machine gun capital of the world. A Mecca of hot lead unloaded at a blistering pace.

There's at least half a dozen places where you can rent some full-auto fun. There's no other town I'm aware of that has more than one. There's only one place, however, located right on the strip. It’s tucked nicely into the shadow of the Stratosphere: The Strip Gun Club.

So that's where I ended up.

In case the name is confusing you, it's not a strip club with guns or a gun club with strippers. It's a gun club that's on the strip. Get it? Okay, good. 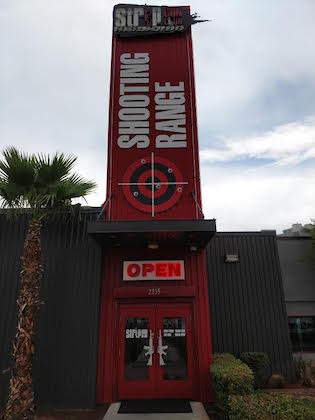 It has got to be one of the most Vegas places I've ever been. It's gaudy and glitzy without being trashy. Quintessential Vegas excess without being excessive. The Strip Gun Club really manages to strike a great balance.

The arsenal is impressive. I say this as somebody who more or less goes around shooting machine guns for a living (What can I say? All of us at the Free Beacon have our own specialties). It takes a lot to impress me.

But that's where the Strip Gun Club is most impressive: the arsenal.

Sure, the staff is friendly, professional, and knowledgeable. The facility was clean, state-of-the-art, and decorated perfectly. The staff also picked me up and dropped me off anywhere I asked them to on the strip. But it was the guns that really set it apart.

Other places might offer a belt-fed Browning 1919. Heck, some might even offer a .50 caliber Browning Ma Deuce. But the Strip Gun Club is the only place you'll ever find those guns in a glorious chrome finish.

I once spent three days camped out in the Arizona desert with hundreds of gun collectors shooting machine guns of all vintage and variety. And that very morning I was spraying lead from a helicopter-mounted M249 down onto the Nevada desert. I've even been to Machine Gun America, another machine gun rental operation in Florida. And yet the Strip Gun Club still managed to have offerings I was excited to try out for the very first time.

I finally shot a Desert Eagle that was comically oversized—but since it seems like that's the intended appeal of it, it actually kind of works. The Steyr AUG I've only ever operated in Counter Strike made its way into my flesh-and-bone reality and rather impressed me. The club's RPD was my first experience with a belt-fed Russian gun but hopefully won't be my last.

The hand-cranked reproduction Gatling gun was a treat too. The chrome-plated 1919 made me feel like a rock star. They were even kind enough to let me, in my role as a good shoe-leather journalist, try out the ol' Chicago Typewriter, which was a lot smoother and more controllable than I expected—a common trait I've noticed over the years when shooting World War II machine guns.

Then the real fun began.

There's really no way to have a bad time while holding down the trigger on any of the club's many full-auto offerings in their main four-lane range—especially with a trained range officer by your side making sure everything is done safely the entire time. But, if you want a pro-tip, the single-lane side range is where the magic happens. That's where they bring out the big guns: the .50 cals.

First up was a nice Barrett M95. They gave me a giant coin to shoot too. That mutilated coin is probably my favorite souvenir from any of these little trips.

Barrett is fun to shoot a couple times, but my shoulder wouldn't be happy with me if I went on any longer than that. The chrome-plated Ma Deuce on the other hand? I could shoot that all-day long.

You can't hear this in the video, but I'm screaming the entire time I'm holding down that trigger. It's a visceral, instinctual reaction. What else can you do but scream at the top of your lungs as the .50 caliber machine gun you're controlling reverberates through your arms and into your core while the rounds you send down range shake the very atmosphere around you in a moment of pure fire and fury?

The only thing I regret from my time at the Strip Gun Club, and perhaps my only true regret in life, is not being able to spend more time with that Ma Deuce.