Feature: What I saw at DCA—chanting for the ACA

Anyone could have the senatorial treatment Thursday night at Reagan National.

It began for me exiting the Metro turnstiles near DCA's south end, a dull roar that sounded like summer camp growing louder as I crossed the skybridge into the building. I was on my way to Pittsburgh for a conference and some time with my parents. As I walked the roar became chanting and then clarified to "Save lives! Save the ACA!" A group of about 70 people stood arrayed behind a cordon armed with signs and shouts and hunting senators. The time was about 10 till 6.

The chants changed periodically as enthusiasm for each subsided in turn, punctuated by cheers for supportive signals from passersby and arrivals of new demonstrators, though often returning to variations and arrangements of "Save lives! Save the ACA!" At 5:57 they became the poetically tighter "CEOs are getting paid with the cuts to Medicaid," which almost sounded festive.

Signage spoke to a variety of priorities and was certainly more diverse than the predominantly white and white collar collection of protesters. There were printed #Resist signs, various hand-drawn posters composed with phrases like "you will literally kill us," "thanks for murdering me," and "have you no heart?" A couple pink "I stand with Planned Parenthood" signs added color to the scene, creating some compositional contrast with the few mothers with children in the group, one of whom wielded a manila folder with the more ambitious "healthcare for all" scrawled on it in one hand as she wrangled a toddler with the other.

During a lull in vocals someone announced the presence of Center for American Progress president Neera Tanden, who stepped out from her posse to take a small megaphone, terribly ineffective in the vaulted hall. She talked about all the voices they were making heard and the senators who were going to hear them and then, wrapping up, asked, "What are our best chants so far?" Some shouted suggestions and later, she said, "Shame! Let's go with ‘Shame!'" And so, "Shame, shame, shame," went the crowd in a dirge, on and on, an auditory crucible. "Awesome!" Tanden said as she returned to her clique to make a cell phone video carrying the most common sign present, the printed "Don't Take My Care"—one doubts, however, that anything will happen to Tanden's health care, no matter what bill Rand Paul comes up with. (We were all saved from further "Shame" by "Call your senator!" which was shouted in the staccato of sorority rush week.)

By this point I had made myself conspicuous, standing back and watching with pen and notebook in hand. Emily Tisch Sussman, campaign director for the CAP action fund, came over to check on me and the rest of the present press. She was amused to discover I was from the Free Beacon, and that I had encountered the protesters by happenstance on my way out of town. She said she and the CAP crew had arrived at about 4:45, and that the demonstration was "actually organic; we saw it online" on social media "literally in our office," and had quickly decided to go. There had not been many people when they had arrived at the airport, she said, adding that she was bad with estimating numbers and wouldn't try, but that the crowd had certainly grown. Senator Chuck Grassley was the only member of Congress they'd seen thus far. She said the local Indivisible chapter may have been involved in organizing the protest, and that there had been some talk of chapters intercepting senators as they landed, too. 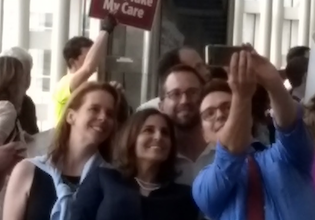 Suddenly the protesters became more enthusiastic and unified than I'd yet heard them, chanting "Donald Sucks," over and over. "That was a little off message," Sussman said in the voice used by mothers whose child is doing something embarrassing. She hurried away to say something to the people carrying a large banner front and center. Suddenly the tune changed to the crisp "Call your senators today! Help us save the ACA!"

I put my notebook away, took a few pictures, and grabbed my bags. As I was about to walk away I saw Tanden and co. bunching up to take a selfie, so I took a picture of that, too. It was about 6:15.

I crossed paths with Sussman again as I headed to TSA security.

"Have a nice trip!" she said with a smile and a wave.