MSNBC has cut ties with network contributor Sam Seder for an old tweet about the rape accusations against film director Roman Polanski, despite Seder's defenders saying he was taken out of context.

Seder tweeted in 2009, "Don't care re Polanski, but I hope if my daughter is ever raped it is by an older truly talented man w/a great sense of mise en scene." 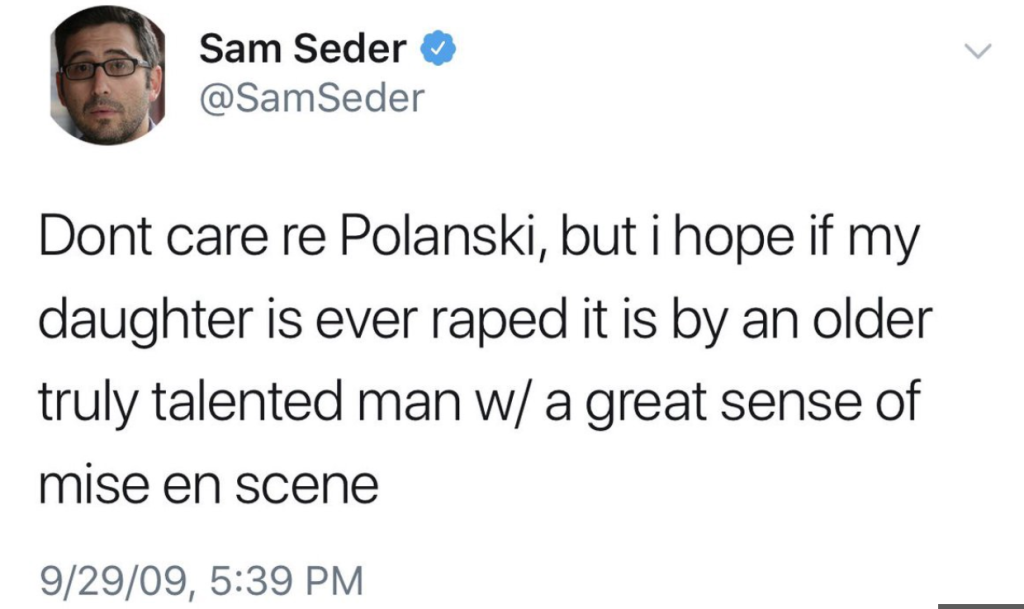 Seder's tweet attracted no notice at the time, but alt-right personality Michael Cernovich recently dug up the post and led a lobbying campaign to get him dropped from MSNBC. The Wrap reported Monday that the campaign worked, and that MSNBC will not renew Seder's contract, which ends in February.

The move immediately ignited outrage on social media, where Seder's defenders argued the tweet was meant to be taken sarcastically and as an indictment of Polanski, who pleaded guilty to unlawful sex with a minor and fled the country before his sentencing in 1978.

Weird that MSNBC would cut ties with a contributor over a single bad joke from 2009, but has no plans to exit Joy Reid after her many, many gaybaiting blog posts from the same time period. https://t.co/kRT6bCCtcX

Totally disgusting. The alt-right forces @MSNBC to cut ties with @SamSeder over a Polanski joke you'd have to bend over backwards to misinterpret. Don't capitulate to these fascists. https://t.co/YuaS3GFVYS

Also, I reiterate my longstanding position that people shouldn't be fired for a tweet, *particularly* one that is obviously being read in manifestly bad faith.

At the time of Seder's tweet, the Washington Post had published two separate defenses of Polanski. Hundreds of film executives also signed a petition calling for Polanski to be released from police custody.

Other tweets show Seder was a critic of those excusing Polanski's actions.

@AmandaMarcotte true and I have no issue with the accusations being pursued legitimately. And Polanski defenders are offensive IMHO.

Seder told the Post on Tuesday that, after seeing his 2009 tweet resurface, he sent an email to Errol Cockfield, senior vice president of communications at MSNBC, explaining that the old post was a satirical attempt to express his "disgust" with those who would excuse Polanski's actions.

"I wrote that tweet out of disgust with those who were excusing or were seeking to advocate forgiveness for Polanski's actions which caused him to flee the U.S.," Seder said. "I was appalled that anyone would diminish the seriousness of rape, particularly of a child by citing the perpetrator's artistic contributions. Obviously, I would not wish any harm of my daughter or any other person."

"I am confident that other tweets from that time will reflect my disgust in a less satirical tone," he added.

From Anti-Semitic Agitator to Democratic Power Broker: The Preposterous Resurrection of Al Sharpton