MSNBC has made the Chris Christie "Bridgegate" saga a constant focus of its programming for four months.

On the ironically titled Now with Alex Wagner, its eponymous host has stayed the network course by going back to the story for the main focus of her show 24 times in just 75 shows, or nearly one third of the time (Luke Russert guest-hosted one).

It's fair to say Wagner, a former employee at the Center for American Progress and the future wife of President Obama's personal chef, doesn't care for New Jersey's governor.

With her trademark smirk, she's started show after show with tongue-in-cheek commentary on Christie's impending doom and his "role" in the story.

Wagner used to be MSNBC's noon host and lead more of a "discussion" show, which more or less consisted of four other liberals feverishly agreeing with one another for 60 minutes. Now, like the left-wing British firebrand she replaced, she has to anchor the entire hour herself.

As the below chart shows, the other most popular leading topic is the horribleness of the Republican Party, while unimportant subjects like the White House and the ongoing crisis in Ukraine are given a little less weight.

Wagner has discussed "Bridgegate" in dozens of other episodes as well, but the video focused on the ones where he was the subject of its introductions. 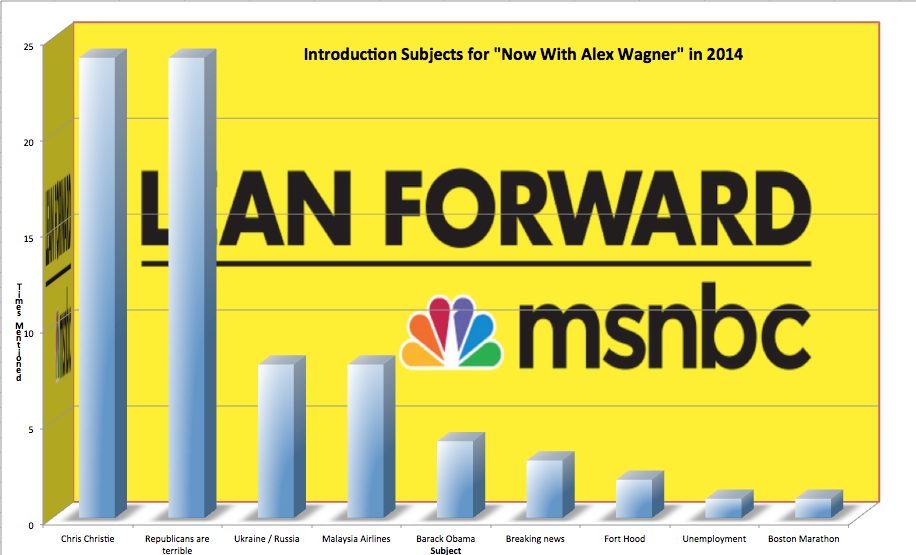 Former NYPD Commissioner: ‘Crime Virus’ Will Get Out of Control