About a year ago, food sections and foodie sites began to offer tips on cooking amid a pandemic. "You’ll be surprised (and relieved) to find how many different meals you can get from a trio of foods you like," the Wall Street Journal assured us. Eater featured "Pantry Cooking 101: Everything you need to know about relying on kitchen staples to do more cooking than ever before."

And we were definitely going to do more cooking—than ever before. Still, I didn’t expect to find myself on a recent Saturday pulverizing Cheetos Puffs, blending them into a cavatappi mac and cheese, and sprinkling Cheddar Jalapeño Cheetos over it. Nor did I imagine myself submerging chicken thighs into a bowl of Mountain Dew marinade later that day. But it’s been that kind of a year.

The shutdown of restaurants sent many of us scrambling for recipes and searching for guidance. "These pantry-friendly cookbooks will inspire you during the pandemic—and beyond," the Washington Post promised us. The list included Vietnamese Food Any Day, Carla Hall’s Soul Food: Everyday and Celebration, and Indian in 7: Delicious Indian Recipes in 7 Ingredients or Fewer.

So much hope, so many possibilities. To wit, there are now more than two dozen cookbooks taking up three shelves in my house, several of which I acquired over the last year. But much like my wardrobe, I kept going back to the same ones: Mark Bittman’s comprehensive How to Cook Everything and Michael Ruhlman’s From Scratch.

And so my curiosity was piqued when a friend sent over two cookbooks: Bon Appé Cheetos: A Holiday Cookbook and The Big Bold Book of Mountain Dew Recipes (I suspect my friend’s client is PepsiCo, which owns Frito-Lay and Mountain Dew).

To be sure, it was a curiosity on par with an interstate car wreck. Or a snuff film. But much to my surprise, I did find some manageable recipes for dishes that could’ve been taken from Chopped, where contestants are forced to create a delicious meal out of unlikely ingredients. (One memorable challenge involved potato pancakes, purple kohlrabi, Korean melon, and goat brains.)

Indeed, Bon Appé Cheetos contains a couple recipes by Anne Burrell, a former Chopped champion and Food Network personality. I decided to make her Dangerously Cheesy Mac ’n Cheetos. And while the dish calls for both Crunchy Cheddar Jalapeño Cheetos and Cheetos White Cheddar Bites, the crucial ingredient here is bacon, which lends the dish meatiness. There’s also onion, flour, milk, three kinds of cheese, and Dijon mustard. The book estimates cooking time at 25 minutes, but it was closer to an hour for me. I did use less salt than it asked for because there’s already enough in the bacon and bacon grease.

In addition, I needed to improvise: My local supermarket didn’t carry the White Cheddar Bites (there are over a dozen varieties of Cheetos), so I substituted Cheetos Puffs, which were also ideal for pulverizing. Then I mixed in the cavatappi and popped it into the broiler for five minutes. The result was a crunchy top and a creamy center. I wouldn’t make this every day, but it was a winner with the kids, the neighbors’ kids, and the neighbor’s kids’ dad. 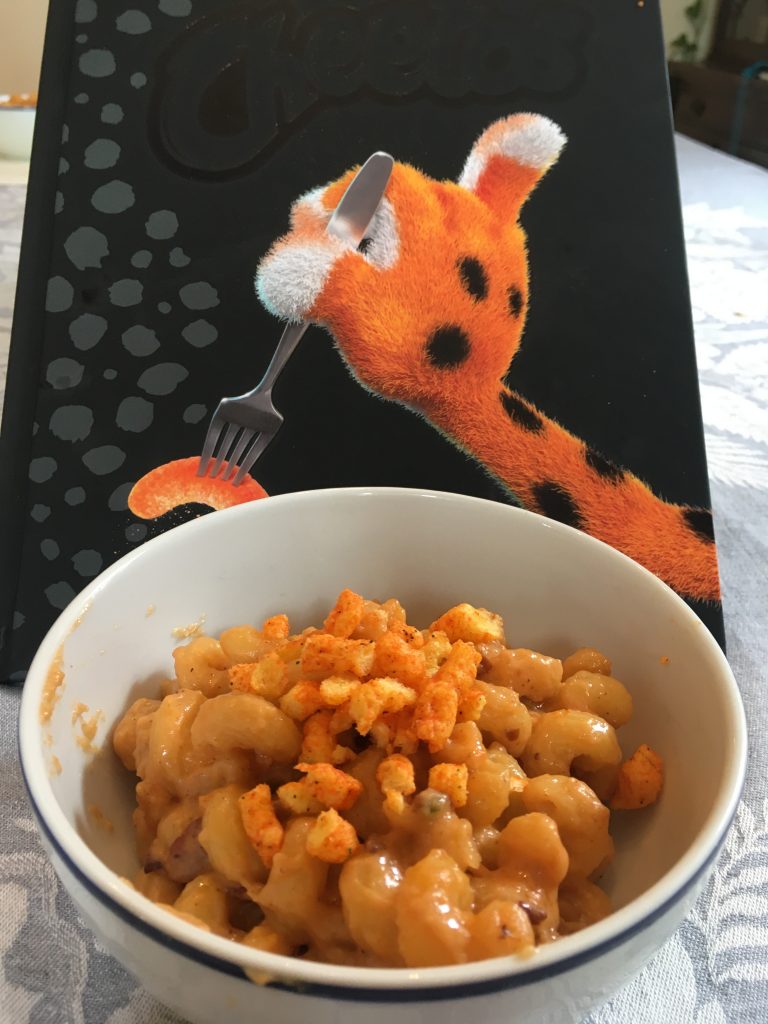 Bon Appé Cheetos contains 22 recipes, including Cheetos with apple pie, a Cheetos whole turkey, and Richard Blais’s cheeseballs. There’s also a rib eye encrusted with "cheetle"—"the cheesy residue that gets on your fingertips" according to "author" Chester Cheetah. (Chester is the sunglass-wearing mascot who succeeded the Cheetos Mouse in 1986.)

I was more apprehensive about Mountain Dew. While the Cheetos cookbook features renowned chefs like Anne Burrell, Richard Blais, and Ronnie Woo, The Big Bold Book of Mountain Dew Recipes is "an anthology of fan-made, fan-inspired, and fan-favorite recipes collected from across DEW Nation. Some we found on the internet." There’s a lot you can find on the internet.

In fact, a number of the recipes are complex. Can Chicken, for example, uses more than 20 ingredients. I opted instead for Citrus Garlic Chicken, since it involves a fairly straightforward marinade of garlic, lemon and lime juices, red pepper, cilantro stems, and, of course, Mountain Dew. I placed the chicken thighs into the marinade bag for several hours, then fired them up on the grill. The result was sweet, sour, and tangy—not a surprise to anyone familiar with Pepsi Chicken and the like. "It’s a keeper!" said my son. (Just as in Chopped, I face three judges daily: my two kids and their mother.) 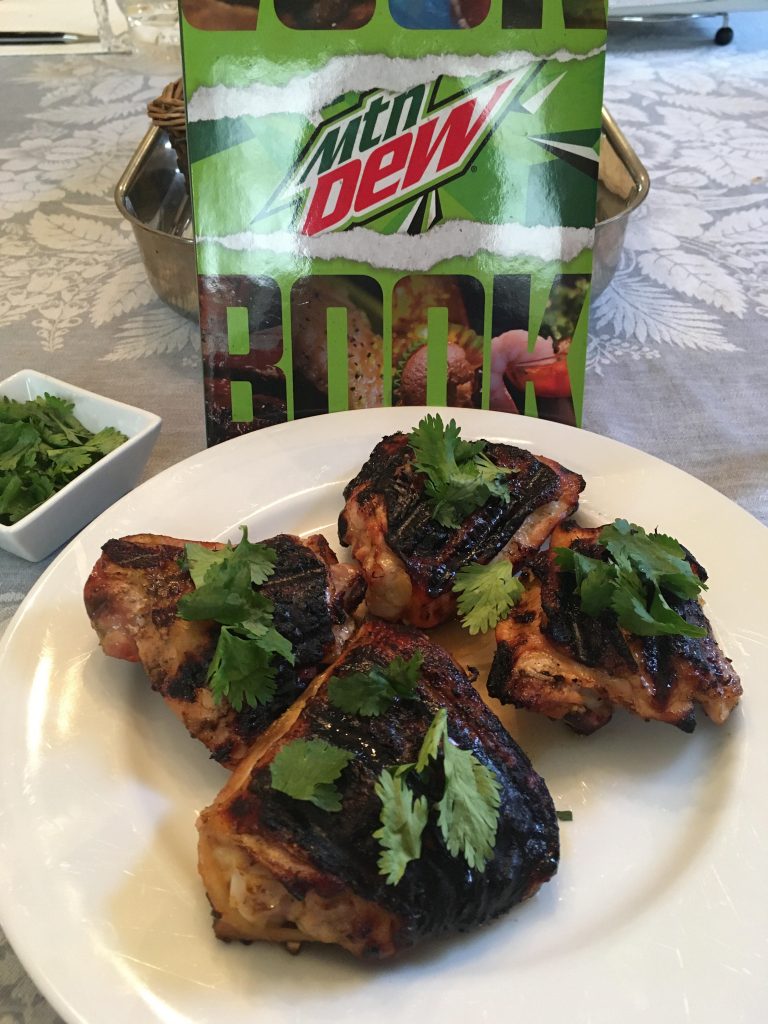 Neither book has any history of their products, which is a shame. Charles Elmer Doolin, the maker of Fritos corn chips, invented Cheetos—fried cornmeal—in 1948. (Doolin combined forces with potato chip maker Herman Lay to form Frito-Lay.) Mountain Dew was also a product of the 1940s out of Tennessee—the name is a reference to whiskey, and the citrus soda became a popular mixer with alcohol. Today it’s "game fuel" for video gamers.

That said, these books have their place on the shelf. They’re not the Bouchon Bakery or French Laundry cookbooks, but they do contain crowd pleasers and even some valuable insights, such as this nugget of wisdom from Mountain Dew: "If food is the path to someone’s heart, then your mouth is the tollbooth." There are also literal nuggets, as in the recipe for Mountain Dew Livewire Orange Chicken Nuggets. I’ll probably try them next with a side of Cheetos mashed potatoes. Did I mention it’s been that kind of a year?

Boobs on the Tube