Los Angeles — Stanley Kubrick’s versatility is legendary. He helmed classics in genres ranging from sci-fi to costume drama, anti-war satire to horror. And that virtuosic versatility—as well as his near-maniacal perfectionism, dedication to research, and talent as a still photographer—shines through at the Los Angeles County Museum of Art’s retrospective of Kubrick’s career, currently running through the end of June.

Why does Kubrick endure? The answer is twofold.

First, Kubrick’s body of work straddles the art house and the mainstream. His work is provocative and thought provoking and excites the senses despite its frequently languid pace. Even as Kubrick traipses through cinematic neighborhoods that are popular with the people but less respected critically—"genre" fare like horror, sci-fi, noir—audiences experience an elevation of tone rarely seen in such pictures.

Second, Kubrick’s films are undeniably and stunningly beautiful. He had an eye for the moving image and a flair for the dramatic. Whether we are watching balletic ships dance through space in 2001, or grunts being harangued by a sadistic drill instructor in Full Metal Jacket, the images onscreen are entrancing. 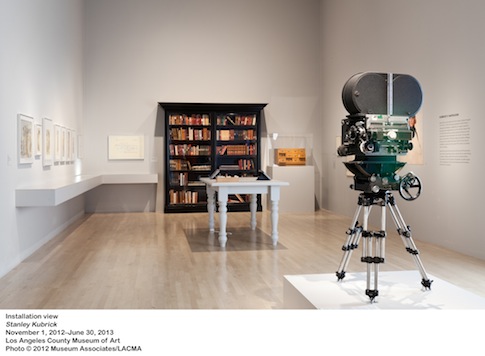 Novices entering the retrospective may be struck by the amount of attention paid to Kubrick’s first artistic love: photography. A collection of stills lines the walls. Nearby rests a table displaying the cameras Kubrick would use. Even Kubrick’s detractors are likely to admit he had an eye for photographic beauty and a distinct artistic sensibility.

Kubrick was a technological innovator as well as an artist. His aesthetic is unique because of his reliance on technical problem solving. When he wanted to film by candlelight in Barry Lyndon—no easy task, given the low level of light candles give off and the high level of light cameras typically need to film—he appropriated a camera designed by NASA to take still photos and redesigned it for his needs. When he wanted to film the opening sequence of 2001: A Space Odyssey in an affordable manner, he used a technique known as "front-projection" on a scale never before seen. When he filmed The Shining, he pushed the boundaries of what was possible with Steadicam technology, and shot from just above the floor to allow the audience to experience the Overlook Hotel from the perspective of psychic tot Danny Torrance.

The exhibit comes loaded with props. Connoisseurs of Kubrickana will find relics scattered throughout. There are models from 2001, costumes from A Clockwork Orange, and axes from The Shining. The real treat is the collection of personal correspondence that demonstrates the director’s persnickety need to control each and every aspect of production, including the marketing of his films. 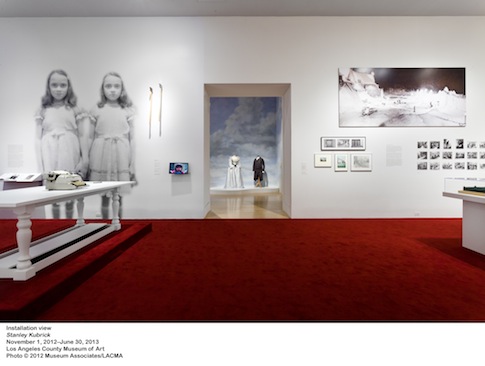 Take, for instance, Kubrick’s instructions to graphic artist Saul Bass, who had been commissioned to come up with posters for The Shining. Bass sent five sketches to Kubrick along with a letter proclaiming his favored piece. Kubrick, in return, sent back a note explaining why all five were no good, and why the one that Bass particularly liked was particularly terrible. It’s all quite amusing.

Of particular interest to the biggest Kubrick aficionados likely will be the portions of the exhibit dedicated to Kubrick’s abandoned works: Napoleon and The Aryan Papers. The sheer volume of work that Kubrick poured into Napoleon is staggering. LACMA displays his collection of more than 200 volumes on the French emperor. Scripts were written, shooting schedules compiled, budgets outlined, costumes designed—but nothing came of the project. Some of the effort would later be put to use in filming Barry Lyndon, and those intrigued by the project unable to make it to LACMA would be well-served to check out Taschen’s monumental, 1,000-plus page collection of Kubrick material.

Short film installations dot the exhibit, as do televisions showing key scenes from each of Kubrick’s works. Parents beware: The museum does not avoid Kubrick’s racier material, so perhaps leave the young ones at home. Everyone else, however, should make time to spend a few hours visiting with the master. 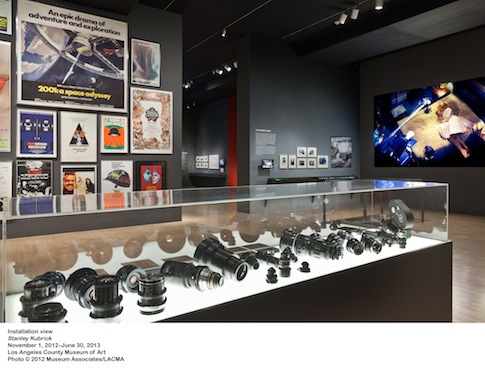 What’s the Deal With Gavin Newsom? 5 Plausible Theories To Explain His Mysterious Hiatus