More than 20 million Americans lost their jobs in April, erasing in one month all of the growth in employment since the end of the Great Recession.

Data released Friday morning by the Bureau of Labor Statistics (BLS) revealed the unemployment rate spiked to 14.7 percent in April, up from 4.4 percent in March. 18.1 million Americans were on temporary layoffs, while a further 2 million reported being permanently unemployed. 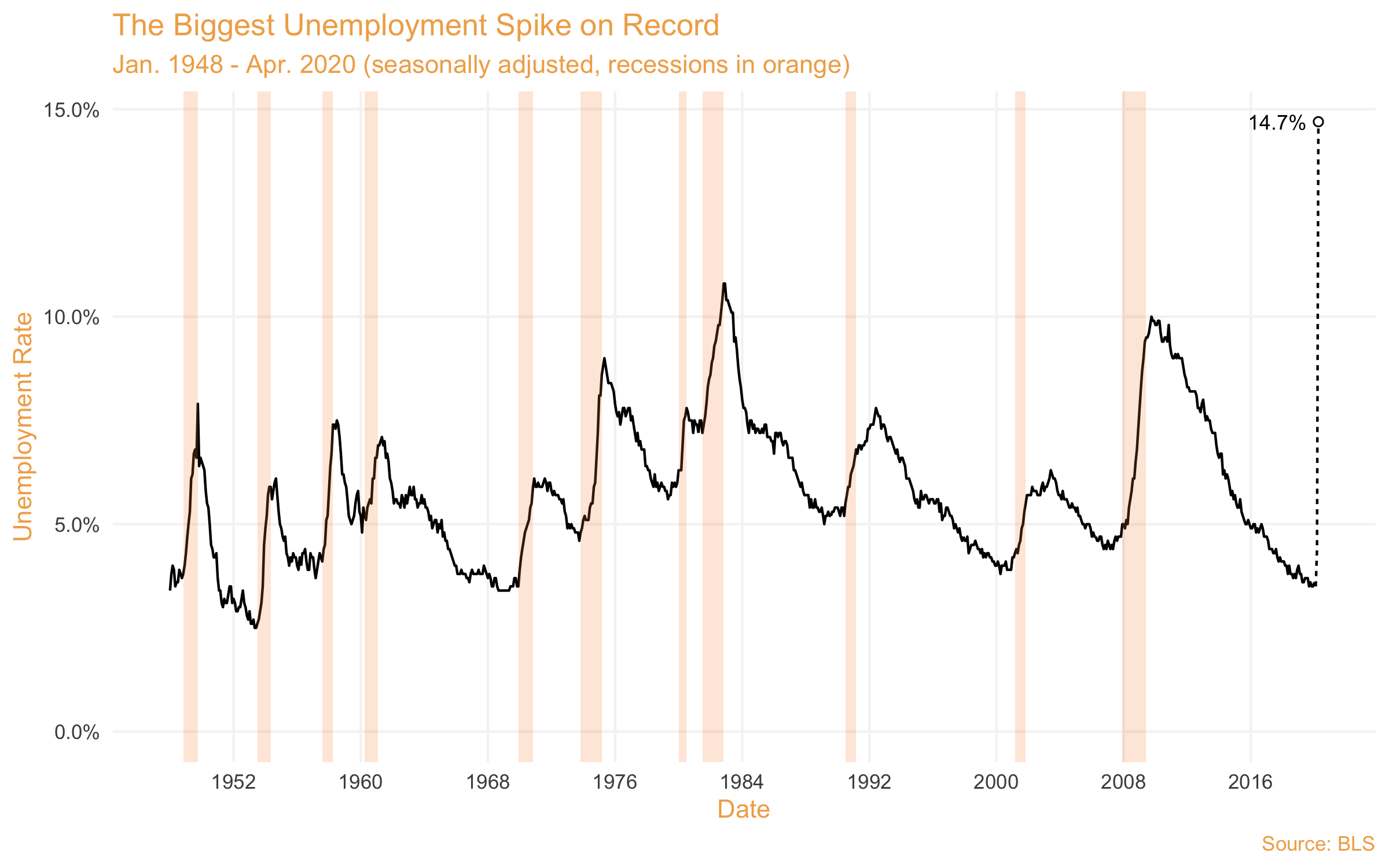 That rate is the highest since the end of World War II but, the BLS cautioned, almost certainly undercounts the true extent of the coronavirus recession. The bureau's survey found a large number of workers were employed but absent from work for "other reasons," likely meaning they were de facto laid off due to the coronavirus. If that population is counted among the unemployed, the unemployment rate is 19.7 percent in April—meaning one in five American workers is off the job.

These new figures, just the latest indicator of the catastrophic job loss that has rocked the country since March, are likely to play a central role in the debate as Congress returns to work next week. They will likely lend firepower to those pushing a bigger coronavirus stimulus, especially plans—like Sen. Josh Hawley's (R., Mo.)—which call for the government to pour even more money into covering the cost of keeping workers employed. The numbers are also likely weighing heavily on President Donald Trump, who once promised to be "the greatest jobs president that God ever created," and who has staked his reelection chances on historic employment levels through February.

Tim Murtaugh, communications director for Trump's reelection campaign, indicated as much in a statement Friday morning. Trump, Murtaugh said, is "determined to open up the economy again" as soon as possible, adding that "he built the economy to historic strength and he will do it a second time."

Doing so, especially in the few short months before November's general election, will be an uphill battle. No group was left unscathed by the shutdown: The unemployment rate for white workers has hit 14.2 percent, black workers 16.7 percent, Asians 14.5, and Hispanics 18.9. For all but black workers, these represent the highest ethnic-group unemployment rates on record. 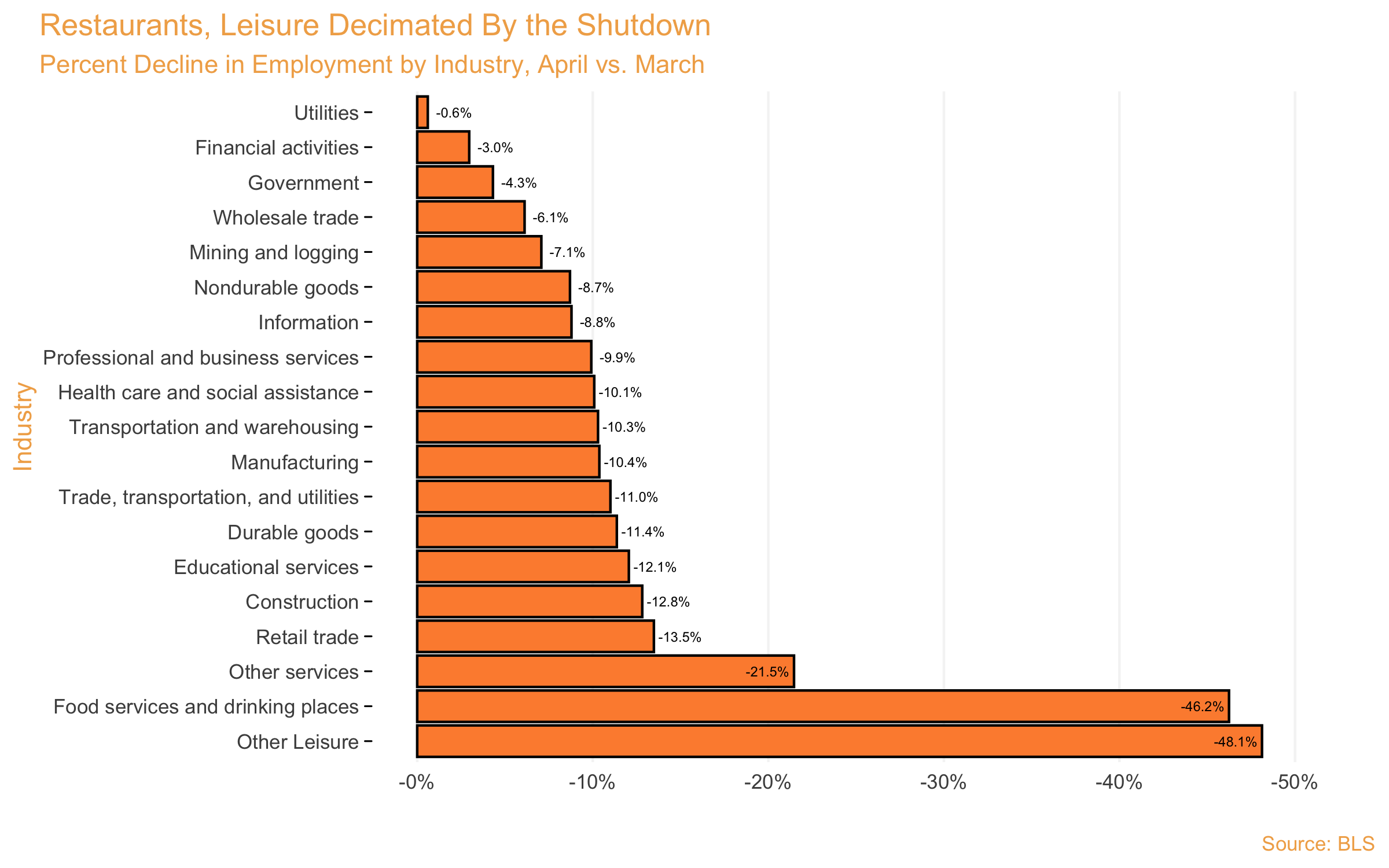 The jobs collapse was not felt equally across all industries. Food services were particularly hard hit, as shuttering restaurants shed 5.5 million jobs. The health care industry dropped 1.4 million, a surprising drop in a pandemic that reflects the mounting costs of the shutdown of "nonessential" care. The average hourly earnings rose by $1.34 to $30.01, BLS noted—reflecting not a growth in wages, but the fact that job losses were primarily among low-income workers.

These figures are just the latest sign of ill health in the economy, adding to recent survey data that indicate nearly half of small businesses have already closed their doors temporarily. That is likely to add to the mounting dispute over whether the economy should "reopen," as many Americans weigh the health of their loved ones against their ability to put food on the table.

It remains doubtful, however, that lawmakers have sufficient power to jump-start the economy, as many economists grow increasingly pessimistic about its medium-term prospects.

Fears of a prolonged recession—and the inevitable political backlash that comes with it—will likely spur some in Congress to think big in negotiating the next bailout package. Speaker of the House Nancy Pelosi (D., Calif.) is expected to make a trillion-dollar ask when she returns next week. On the other side of the aisle, Hawley took the jobs report as an opportunity to call again for the government to directly cover payrolls, writing on Twitter, "workers need help now."

Against these calls for big spending, however, is growing concern among some in the Republican caucus over the sheer volume of cash the federal government has infused into the economy. Against 20 million unemployed, lawmakers must weigh a $4 trillion deficit, which some argue could slow economic recovery. The resultant tug of war almost guarantees the coming fight over "phase four" coronavirus stimulus will be the messiest and most acrimonious yet.