Lawmakers Want to Reopen America, But It May Not Be So Easy

With millions out of work and a tidal wave of small business closures on the horizon, many policymakers are clamoring for an end to coronavirus lockdowns and a "reopening" of the economy.

Just as state and federal lawmakers moved to "shut down" the economy to slow the spread of the coronavirus, leaders are now weighing when to start it back up. President Donald Trump has officially convened a panel to weigh when and how to reopen; blue state governors have followed suit with interstate planning committees. Some congressmen have pressed for weeks for a reopening, arguing that the "cure is proving worse than the disease itself."

These statements assume that Americans are waiting for lockdown orders to be lifted so they can get back to work and visit restaurants and movie theaters. Nationwide data, however, indicate that vast swaths of the country had sequestered themselves before state, local, and federal government mandates pressed them to do so. As a result, restarting the economy may take more than the lifting of bans and social-distancing guidelines.

Contrary to what some lawmakers imagine, America's current pause is substantially self-imposed. From restaurant reservations to airline flights, data show that America brought itself to a halt, reflecting more a fear of disease—and a sense of solidarity with those most at risk—than the following of government orders.

If accurate, these data indicate that merely declaring the economy "open" will not have a major impact. Rather, they suggest a successful reopening is less about making rules and more about helping Americans make informed decisions about what is safe for them to do.

Polling data offer the clearest picture of how Americans feel about the shutdown, and the picture is not rosy. Recent data from Axios/Ipsos show that large majorities consider common public activities, like going grocery shopping or attending a family gathering, to be a large or moderate risk right now. 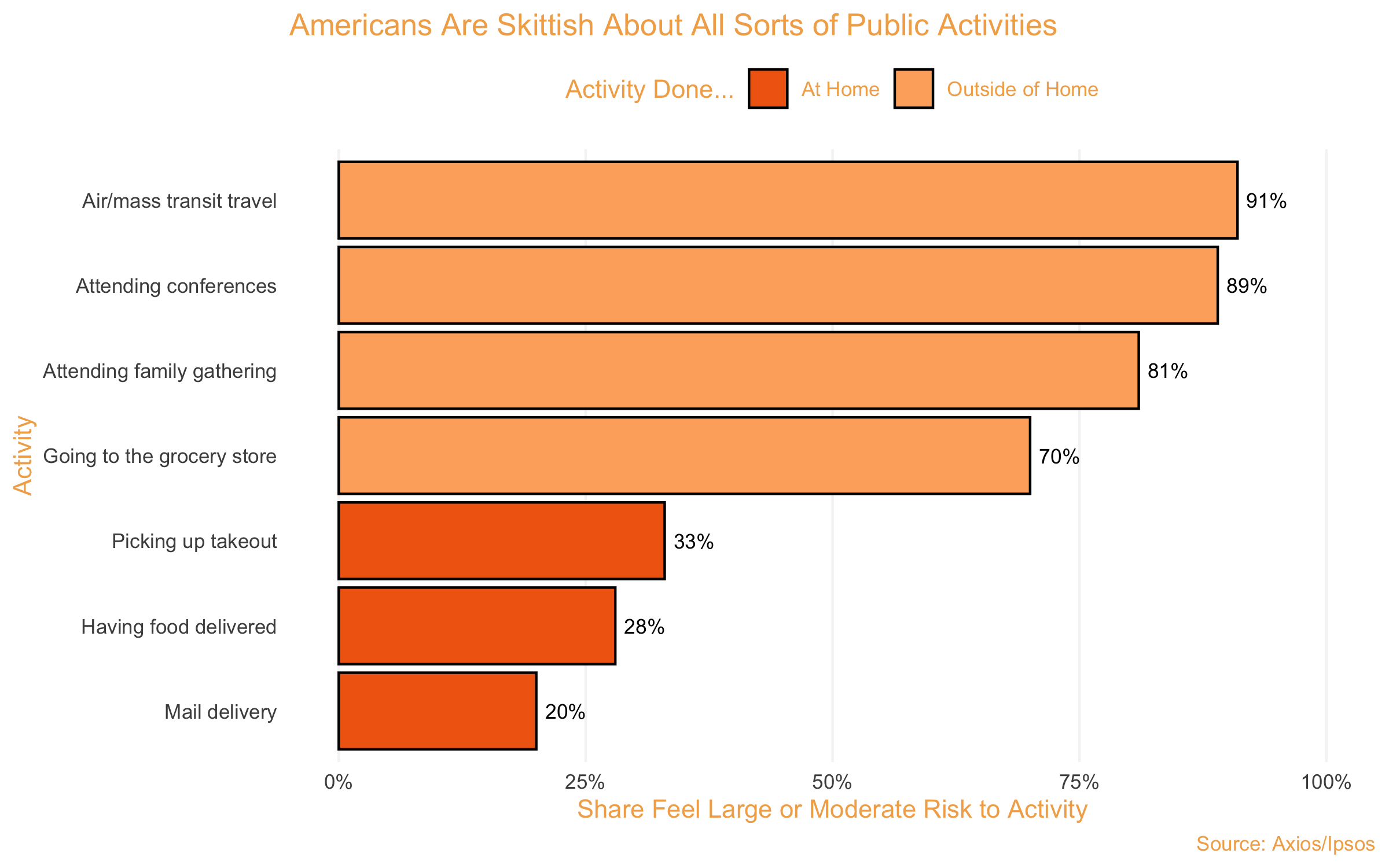 Other polling confirms this skittishness. Data from the Harris Poll show that a majority of Americans believe that more than a month is needed before they should "start returning to work and life as normal." A Seton Hall poll found that 72 percent would not attend sporting events until a vaccine for SARS-CoV-2 is found.

In other words, Americans are not raring to go back to work. What is more, this attitude is not novel—even before state governments shut down their economies, Americans were shrinking from commerce.

One major piece of evidence comes from data about restaurants, which were some of the first institutions targeted by coronavirus-related restrictions. Many states have ordered restaurants to close their dine-in service, with the timing of those closures varying between states. OpenTable, a popular online reservation service, has published state-level data on daily restaurant reservations as a percentage of reservations on the same day of 2019. 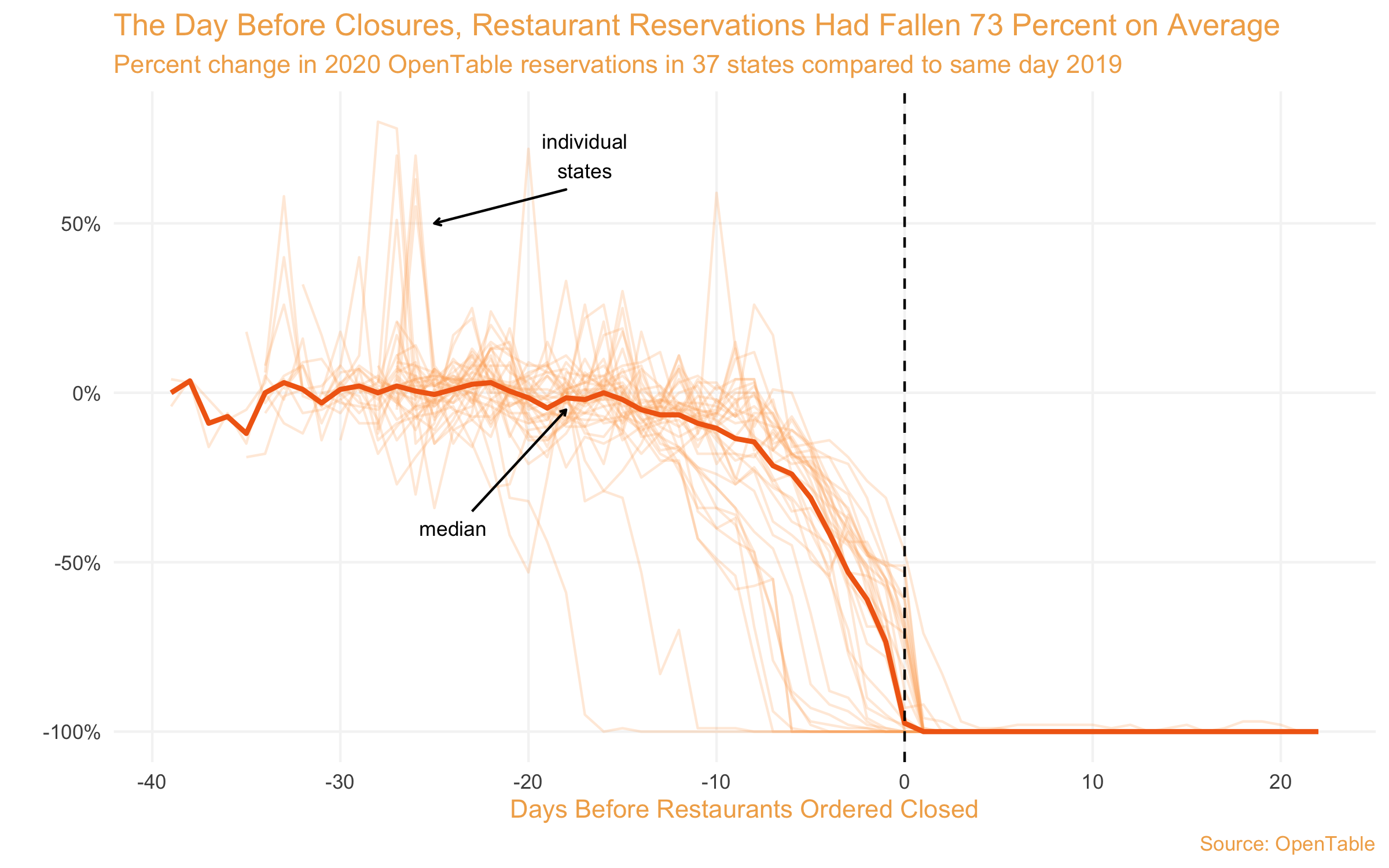 Another measure comes from the nation's aviation system. While international flights have been mostly grounded, thousands of domestic flights remain in the air. Congress even required airlines to maintain a minimum level of service as a precondition for receiving bailout funds from the most recent coronavirus stimulus bill.

While Americans are still free to fly, however, the number who actually do has collapsed. The TSA has been publishing daily data on the number of travelers it screens—it is now averaging roughly 100,000 a day, down from 2.4 million at the same time last year. 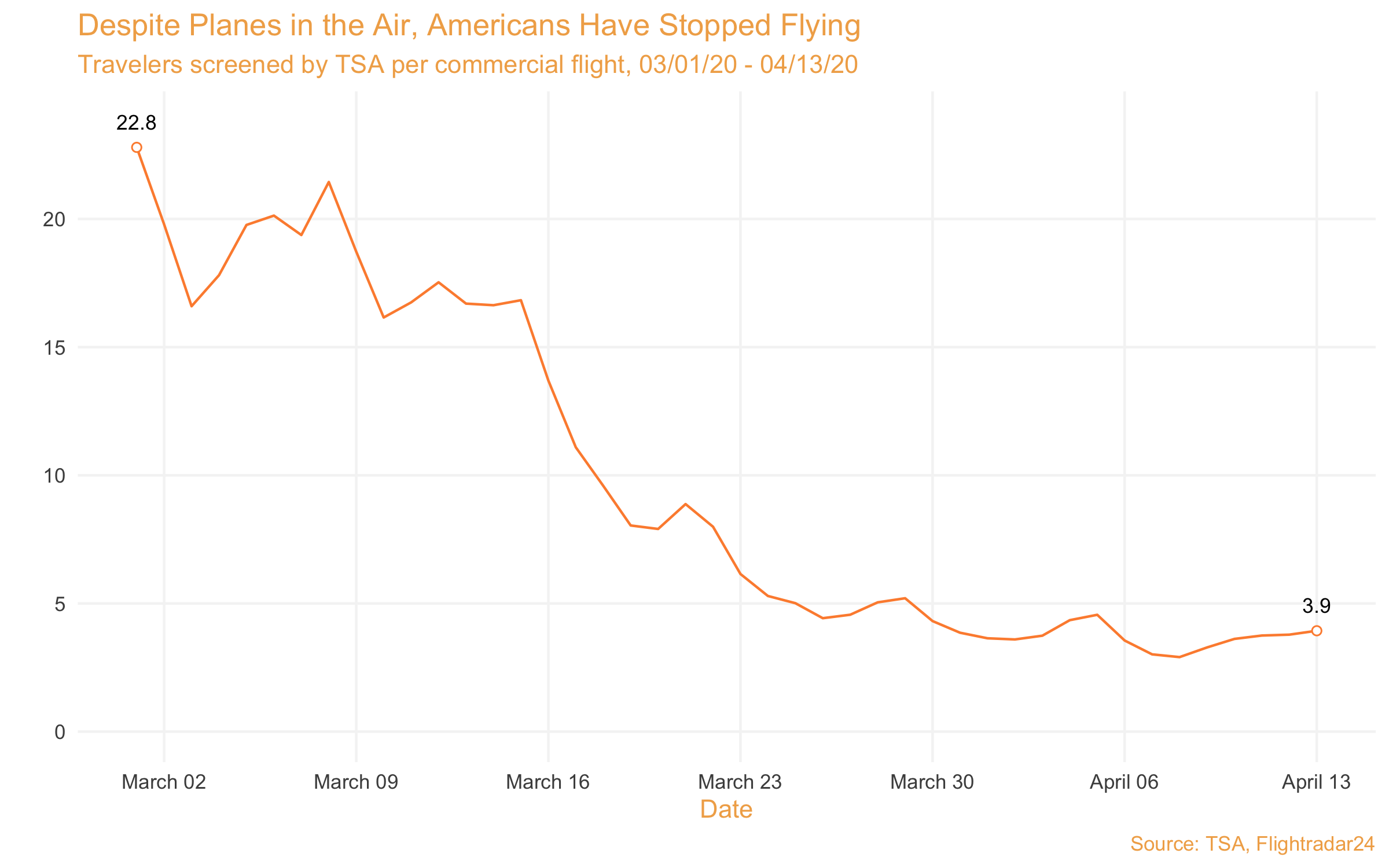 The decline becomes even starker when compared to the number of flights actually in the air. At the start of March, there were 20 or more travelers screened per commercial flight. As of the most recent data, that number has fallen more than 80 percent.

Some of this decline is attributable to stay-at-home orders, but polling indicates that Americans are also more wary of flying. A recent Harris poll found that just 14 percent of Americans would be willing to fly within a month of COVID-19 cases peaking; that figure was still only 42 percent six months out.

In short: even if state and federal leaders were to declare the economy "open" tomorrow, economic activity would be unlikely to fully spring back. America's stoppage is at least as much a reaction to the perceived threat of the novel coronavirus as it is to government instruction.

Does that leave lawmakers powerless to affect behavior? Not quite—in fact, it tells us something about what will make Americans willing to go back to work. 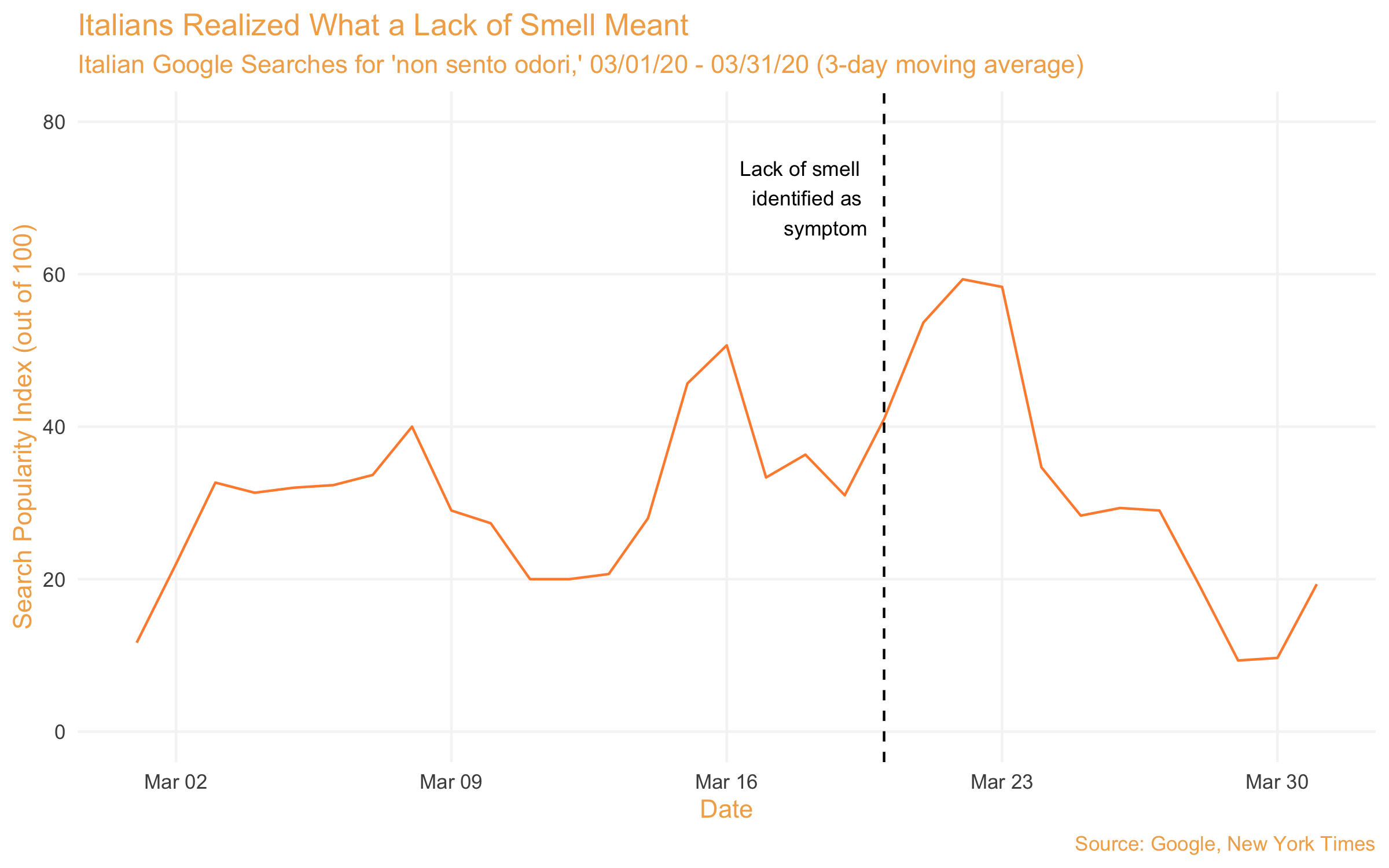 One of the earliest symptoms of coronavirus appears to be loss of sense of smell, or anosmia. A New York Times analysis noted that Google searches for "non sento odori" ("I can't smell" in Italian) rose steadily in March, then fell after reports of anosmia as a symptom became widespread.

The rise suggests that the disease was spreading, but the fall suggests something else: Even amid the pandemic, people are still responding to new information, no longer needing to Google "I can't smell" when anosmia's significance became common knowledge.

Widespread access to coronavirus testing—on the order of hundreds of thousands or millions of tests a day—is central to most plans to reopen the country. Testing data allows public health experts to determine where new outbreaks might flare up. It is also critical, however, to informing the public about where they should and should not go, and when they need to take extra precautions such as staying home from work or school.

More testing is just one example of a general principle: A return to work requires giving Americans information about what is safe. Absent such information, efforts to reopen the economy are likely to be stymied by a still-skittish populace. That, in turn, likely means an extended recession, one that could set the country back decades.