Column: The price of access to Obama is too damn high

My friend Jim emailed me Wednesday.

"Friend," he wrote, "I want to make one thing absolutely clear: We’re up against a whole lot more than just opposition in Congress."

"Organizing for Action is going to shift the balance of power in Washington back to real people," Jim told me in his email. "People like you have shown over and over again that no amount of spending can stop millions of Americans calling for change."

Jim’s right: The billion dollars President Obama and affiliated groups spent in 2012 did not stop millions of Americans calling for change.

But now Jim wants me to "donate $5 or more" to his new gig because "We have our first fundraising deadline this weekend."

And I can’t do it. It’s not worth the investment. The price of access to Obama is too damn high.

Five dollars won’t even buy me lunch with Jim. A donation of $50,000 or more was the price of entry to Organizing for Action’s "Founders Summit" this month at the St. Regis hotel in Washington, D.C., where Messina mingled with guests and the president spoke at dinner. To join the "task force on policy," I’d be expected to raise "at least $250,000 to finance advocacy work on specific issues."

And I’d have to raise $500,000 to earn "the privilege of attending quarterly meetings with the president, along with other meetings at the White House," according to the New York Times. A spot on the board of directors of Organizing for Action requires a pledge to raise "$1 million for two consecutive years."

Accumulating the capital to mingle with the likes of Jim Messina and President Obama is an arduous undertaking if you are not already a tech billionaire or Hollywood mogul or green energy venture capitalist or Vogue magazine editor or labor boss. (Organizing for Action says it won’t take money from lobbyists, corporations, or political action committees, but it’s happy to take money from unions.)

And it doesn’t stop with Organizing for Action. Obama and the progressive left have created a vast network of interlocking structures that mediate between financial interests and the executive branch. Shaping policy to benefit one’s company—or even to protect it from government interference—requires massive donations to all of them.

Take my friend Jim for example. In addition to Organizing for Action, he is setting up his own consultancy, which is, Bloomberg reports, "courting corporate clients." He’s also been "giving paid speeches, domestically and internationally."

Jim’s firm doesn’t have to disclose any of those clients. (Bloomberg says the Democratic National Committee is among them.) The influence brokers of the world will be sure to donate to Organizing for Action, hire Jim’s firm for consultation and media strategy, and book him for a lunch speech in Vegas.

The legal and ethical ground of Organizing for Action becomes muddier every day. Politico’s Ken Vogel wonders whether Jim Messina’s pro bono work for the group might count as an "in-kind contribution" to Organizing for Action, thus violating the group’s self-imposed pledge against corporate donations.

That pledge is more or less worthless anyway. Consider a CEO who contributes on an individual basis to Organizing for Action while his company joins Business Forward, the Democratic trade organization that, for a price, organizes meetings between its corporate members and White House officials, allowing said corporations to avoid lobbying rules.

Then he hires Messina’s firm. Then he works with the Common Purpose Project and Enroll America to avoid getting hit by the arc of history as it bends toward justice. Then he donates to Priorities USA Action, the Obama affiliated Super Political Action Committee that can raise unlimited funds, and the DNC, the party congressional committees, and individual candidates.

Whatever money is left will go to the constituent parts of the Democracy Initiative, the secret consortium of progressive groups advocating for loose voting requirements, filibuster reform, and suppressing the political speech of wealthy conservatives. Then the CEO will feel morally superior as he waits for the government to make it rain for his firm.

The more you examine this constellation of pressure groups, the more you suspect that its true purpose is to serve as a full-employment plan for Democratic hacks. These former campaign hands make a living from businesses scurrying to hedge against political and economic risk. Messina is just one among the tens of thousands of political professionals trying to dredge gold from the river of money flowing through Washington.

Which may account for Organizing for Action’s hyperactivity. Not a day goes by without this grassroots organization inserting itself into another policy dispute. First it was the debate over gun control. Then Organizing for Action said it would become involved in the immigration debate.

After that, the group banged the drum for legislation to reduce carbon emissions. And after that, Organizing for Action suddenly discovered a passionate interest in an obscure campaign finance battle in New York state that has nothing to do with the president’s agenda.

For such a young group to move in all of these directions at once is typically a sign of strategic indirection—especially when you consider that Organizing for Action’s influence in the gun debate so far has been nil.

From a fundraising perspective, though, casting a wide net makes sense. Involving itself in as many issues as possible creates donor possibilities for Organizing for Action. It enlarges the universe of factions that want to placate the progressive juggernaut before it strikes them down.

And of course, it opens doors to consulting contracts for my friend Jim. 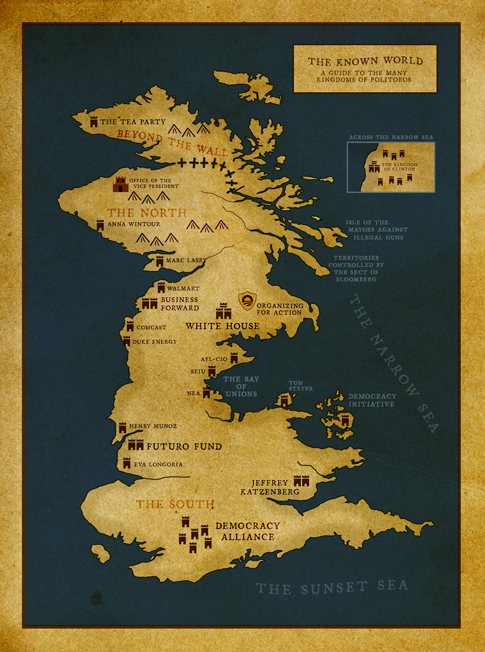