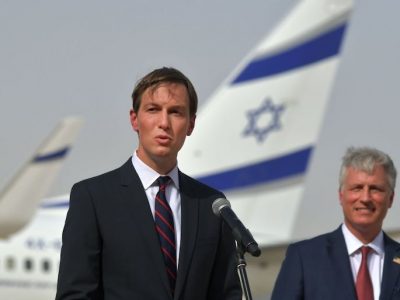 Or at least she was until recently. Gorelick, the Post reports, has made a very bad boo-boo. Among the clients paying her exorbitant fees, you see, are Ivanka Trump and Jared Kushner. And for this crime, the Post continues, her liberal friends have cast Gorelick out and formed a "No Jamies Club."

No one raised a fuss when this paragon of virtue repped BP, the Clinton Foundation, and the student loan industry. But the Trumps are just—so—icky. Democratic consultant Hilary Rosen, for example, posted a Tweet suggesting Gorelick is "complicit" in whatever nasty things the Trump family stands accused of doing this morning. A former Clinton speechwriter tells the Post, "Representing Jared and Ivanka is a case of pushing the ethical envelope." Other "longtime friends of Gorelick contacted for this article," the Post goes on, "offered complimentary comments about her on the record, and then, after asking if they could make other remarks without attribution, bashed their colleagues to smithereens."

And maybe the supposedly professional and upstanding and righteous liberals who populate Washington should take a chill pill? These are, after all, the same well schooled, affluent, smooth-talking men and women who erupt in outrage at the slightest suggestion that a lawyer might decline to represent an unsavory client. What does it say about them that Javanka's attorney is held to a different standard than Khalid Sheikh Mohammed's?

Back in 2010, remember, when now-congresswoman Liz Cheney asked why the Obama Justice Department was hiring lawyers who had defended al Qaeda, this same legal and journalistic community was incensed. "This is exactly what Joe McCarthy did," a "human rights expert" for the Center for American Progress told the American Prospect. "The attacks from lowlifes like Cheney and National Review's Andrew McCarthy have been even more vile than their typical nonsense," wrote a blogger for the Washington Monthly. "The American tradition of zealous representation of unpopular clients is at least as old as John Adams's representation of the British soldiers charged in the Boston Massacre," wrote a group of former Bush administration officials, many of whom went on to oppose Donald Trump.

In 2014, when the Washington Free Beacon obtained audio of Hillary Clinton bragging and laughing about exploiting technicalities to defend successfully an accused child rapist, liberals denounced the Free Beacon report for suggesting a non-public attorney has any choice in the clients she takes on. How dare we impugn the sanctity of the legal profession, was the gist. Didn't we realize, these critics said, that a lawyer can defend, is encouraged to defend, is immune to criticism for defending even the most loathsome subhuman piece of criminal scum?

Left unmentioned was the proviso stating that these rules apply only to terrorists, rapists, and Democrats.

Not everyone is jumping to conclusions. In his piece on Gorelick, Marc Fisher of The Washington Post is quick to remind his readers that, "ethically, Gorelick has every right to represent Kushner and his wife." You don't say. Let us pause, though, to reflect on the bizarre cultural conditions that make such a "to be sure" paragraph necessary.

The Office of Government Ethics notwithstanding, Jared Kushner and Ivanka Trump stand accused of no crime other than familial relation to a man large sections of the public hate with a visceral and sometimes violent passion. Kushner's business practices and clumsy attempts to establish a backchannel to the Kremlin prior to his father-in-law's inauguration may have been conflicted and amateurish and ill conceived. But, as of this writing, no one has said that these activities were illegal—and they certainly do not rise to the level of violent crime or international conspiracy to murder American civilians. Any moral universe in which representing the president's daughter and her husband is more problematic than defending Gitmo detainees or laughing off a child rapist is a warped one, indeed.

But that is precisely the sort of universe we inhabit here in the swamp. As I read my paper I often find it difficult to know whom I am annoyed by more. There are the liberals attacking Gorelick for representing the Kushners even as they, the hypocrites, take money from liberal bogeymen on Wall Street and in the oil industry and in authoritarian foreign governments. There is Gorelick herself, who as she bills top dollar has assured Politico and the Post that she also "has kept Kushner and his wife informed as she continues to handle matters that push back against the Trump administration," such as representing an immigrants-right group pro bono, challenging President Trump's crackdown on sanctuary cities, and hosting "family and friends who came to Washington earlier this year to march against the new president." Don't go after me, Gorelick is saying, I'm just paying the bills. Maybe she can build a new guesthouse with Kushner's money.

Then there is the media that gleefully cheers on this organic vegan food fight while playing its own double-dealing game. Note how clever Fisher is, finding a way to shoehorn duplicitous, not-for-public-consumption jibes into his piece while congratulating himself as the upholder of probity: "Those people will not be quoted in this article, by name or anonymously, as one tiny bulwark against outright awfulness." Except you kind of did quote them, by mentioning in the first place these craven and cynical "longtime friends of Gorelick" who say one thing on the record and another thing off the record. How many longtime friends can she have? And why mention them at all, but to position yourself as the opponent of "awfulness"?

The Trumps, the lawyers, the lobbyists, the press—they deserve each other. Mark Leibovich's book about the swamp was called This Town. I have an idea for a sequel. Working title: These People.