Yes, President Obama Should Forgo Air Travel to Prove He Is Serious About Climate Change

President Obama flew to Los Angeles on Wednesday to receive a human rights award from Steven Spielberg, just days after the White House officially revived its push for 'urgent action" on climate change.

Not to mention all the extra traffic congestion Obama’s visit caused, which resulted in even more carbon dioxide being pumped into the atmosphere. Even in Los Angeles, not everyone can afford to shell out $69,900 for a Tesla ($62,400 after federal tax credit). In fairness to Obama, though, he wasn't just receiving an award. On Thursday, he plans to attend a fundraiser at a billionaire’s beachfront mansion in San Diego.

Liberals were compelled to respond to Drudge's tweet, and in doing so demonstrated a stunning lack of understanding as to why conservatives have a hard time taking climate change zealots seriously.

They didn’t get it (or pretended not to):

Is @DRUDGE really imploring POTUS to fly green, or saying Air Force One proves that global warming is a myth? https://t.co/Ou3GCeG8WZ

Some responded at length, invoking SCIENCE to assure us that Obama had done nothing wrong:

First, the Daily Mail's estimate of CO2 output by Obama on Earth Day — 375 tons — is substantially higher than what an average flight between DC and Washington state would yield. But lets go with it.

In 2012, the United States emitted 6,526 million metric tons of carbon dioxide. That’s 6,526,000,000 metric tons. Of that, 1,800 million were from transportation. The biggest source of carbon emissions was electricity production.

Others celebrated Drudge’s humiliation in the face of such a thorough, scientific debunking:

LOL when it comes to getting told, @drudge is the get toldest. http://t.co/8hw2Dzr9Hq

Drudge is right. It's hard to take people who are CONCERNED about climate change seriously, because their CONCERN is almost always inversely related to the amount of personal inconvenience they're confronted with. (It might be necessary to stipulate here that Al Gore having to cough up a couple million dollars extra to build his entire mansion out of solar panels does not qualify as a personal inconvenience; same goes for Democrats Senators who stay up late to give a speech.)

As Sonny recently explained, this is one of the most aggravating characteristics of the liberal worldview. Media Matters, for example, is the most foremost liberal champion of labor unions—until its employees actually try to form a union. The White House complains about the scourge of unpaid internships—while refusing to pay its own interns. (Not that they need the money, as many of them are the children of top campaign donors.)

When it comes to climate change, liberals believe emphatically that SOMETHING MUST BE DONE, but few of them are actually willing to do anything that would even slightly disrupt their daily lives, such as forgoing a plane ride to California, or driving 50 mph on the highway, or riding a bike to work, or personally boycotting products made in China, the world's largest polluter. 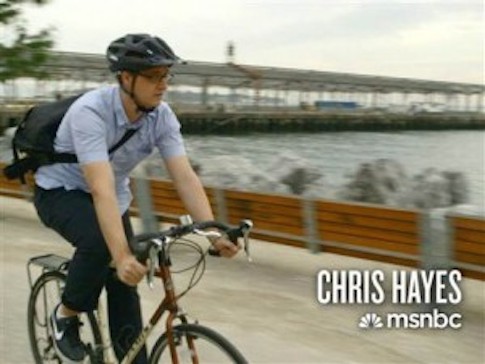 In this respect, the voting public is in complete agreement, hence our planet-healing president’s inability to rally support for major climate change legislation (though he did manage to funnel billions of taxpayer dollars to politically connected green energy firms via the stimulus package). They are naturally skeptical of liberals who tell them that fighting climate change will cost literally trillions of dollars, but it can all be paid for by taxing rich people and oil companies.

Sure, it may be pointless to expect a random hipster to forgo a cross-country flight for the sole purpose of living by one's own standards. It wouldn't make a difference, and no one would care. If President Obama, on the other hand, wanted to demonstrate that his GRAVE CONCERN about the dangers of climate change was genuinely GRAVE, he could do so—not by spending someone else's money on a massive solar farm that incinerates bald eagles—but by actually imposing an inconvenience on himself, even if the actual impact would be "less than a drop in the bucket."

At the very least, doing so would help drive home the point that combating climate change will require significantly more effort, and significantly more financial sacrifice, on the part of average Americans than simply voting for Democrats and/or watching The Daily Show.

Speaking of "a drop in the bucket," the Obama administration's own review found that building the Keystone XL oil pipeline 'is unlikely to have a substantial impact" on climate change. So it would be silly to oppose it, right? The science is settled. It goes without saying that most of the people opposing Keystone the loudest will not suffer any personal inconvenience if the pipeline is not built. They would, on the other hand, experience a significant uptick in personal satisfaction and moral superiority.

Liberals who excuse President Obama's massive carbon footprint by shouting "But he's the president!" and "it's only a drop in the bucket!" should instead be demanding that he lead by example because he's the president. Obama could even give an IMPORTANT SPEECH or two about all the things he plans to personally give up, and urge others to follow suit.

The preferred course of action, obviously, is to never have to talk about any of this. Liberals would love a repeat of the Obamacare "debate," which they managed to "win" after lying relentlessly about the consequences of the law they were proposing, a law whose disapproval is at an all-time high now that more people are finding out what's in it.

They'd prefer to just ram through a magical assortment of government mandates, tax hikes, and other policies that would force everyone DO THE RIGHT THING whether we like it or not. There would be no honest discussion about the trade-offs, or of the added expense and personal inconvenience we can all expect to face. And years from now, they'll scold us for taking them at their word: "Yeah, you can't keep your crappy plans." No, Mr. President, you can't accept your crappy human rights award in person this year. Just deal with that.