Movie posters for a spoof entitled "Saving Barack Obama" have hit Los Angeles ahead of the president’s visit to the city.

The posters, which feature President Obama walking into the horizon between a pair of his teleprompters, have appeared on bus stops and benches throughout Los Angeles, including just outside Melrose Avenue, the main entrance to Paramount Pictures. 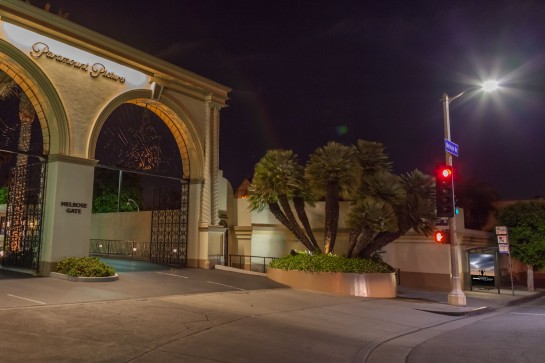 The parody film's poster outside of Paramount Pictures

A parody of Saving Private Ryan the poster says it is "A Steven Spielberg Ploy," and its tagline reads, "The mission is a fraud."

The appearance of the artwork coincides with Obama’s visit to Los Angeles on Wednesday to receive a humanitarian award from Spielberg. 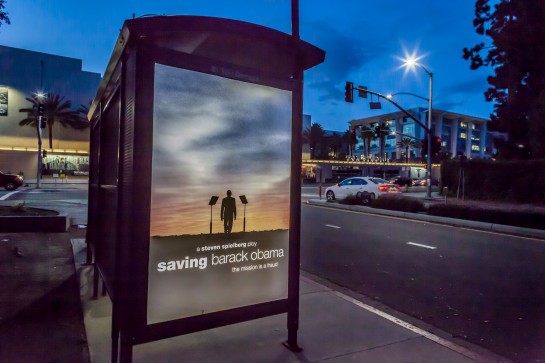 Obama will be honored at the University of Southern California’s Shoah Foundation, a Holocaust museum founded by the Hollywood director after he made Schindler’s List.

Obama will receive the institute’s highest honor, the Ambassador for Humanity Award, for his "global efforts to protect human rights, his commitment to education and expanding educational technology, and his work advancing opportunities for all people."

The president will speak to "common values and shared responsibilities" at the event, which will be attended by House Minority Leader Nancy Pelosi (D., Calif.) and Senate Majority Leader Harry Reid (D., Nev.).

While he is in town, Obama will also attend a Democratic fundraiser at the home of Alan Horn, the chairman of the Walt Disney Studios, with tickets going as high as $64,000 per couple.

The artwork is part of a larger campaign by anonymous street artists who are filling cities with political messages that oppose the administration. Images with the president golfing and the headline "subpar" appeared in various cities throughout the PGA tour, including at the Masters Tournament in Augusta, Ga.

The advertisements for "Saving Obama" are currently running in the areas surrounding Avenue of the Stars, including across from the Century Plaza Hotel, where Obama will receive his award.

GUEST COLUMN: Yeah, I Threw Myself a Massive Party at My Island Estate in the Middle of a Pandemic, And There’s Nothing You Worthless Plebs Can Do About It