Why Does Hollywood Ignore the ‘American Sniper’ Audience?

The Hollywood Reporter has a fantastic look at the astounding success of the Clint Eastwood hit film, American Sniper. The analysis provides incredible insight into how this film shocked the industry to break box office records last week. 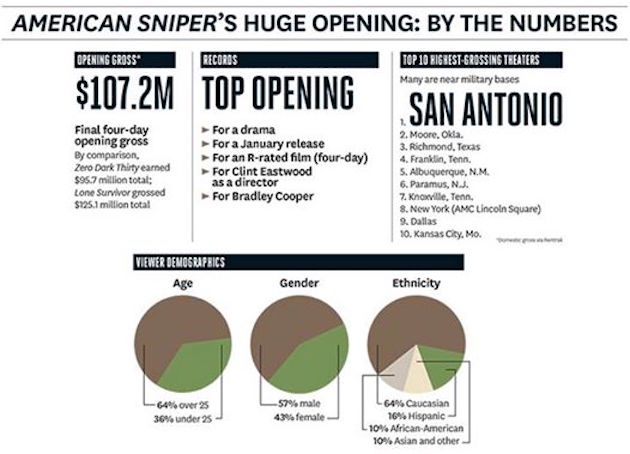 I have broken out an excerpt of the article for you to read below (and you really should click through and read the entire thing).

There are at least 22 million veterans in the U.S. and more than 1.5 million active-duty members of the armed forces. Add family members, and those numbers grow exponentially. Just before Thanksgiving, Warners and Glover Park began screening Sniper for leading veterans groups. The support was immediate, sparking glowing press within the military community. "About 2.8 million men and women have served in the post-9/11 wars, yet there is still a clear military-civilian divide in this country," says Paul Rieckhoff, founder and CEO of Iraq and Afghanistan Veterans of America. "But director Clint Eastwood — an Army veteran himself who used the GI Bill to go to college — got it right." The film was screened at 20 military bases, and on Dec. 19, Cooper and co-star Sienna Miller sat for a Q&A at the Fort Hamilton Army Base Theater in Brooklyn, followed by another Jan. 14 at the Walter Reed National Military Medical Center in Bethesda, Md. "If, because of this movie, people are talking about veterans and what they've sacrificed, that's a victory," says Greg Silverman, Warners president of creative development and worldwide production, who immigrated from South Africa as a child and says he has an affinity for those serving in the U.S. military.

Many veterans live in the Southeast, Midwest, and South, where Sniper did huge business, from the smallest towns — unusual for an R-rated film — to bigger cities. Bucking the normal pattern, top theaters included sites in San Antonio, Moore, Okla., Richmond, Texas, and Albuquerque, N.M. Compared with the norm, Sniper underindexed in L.A. (where it already had opened), as well as in San Francisco, Oregon and Canada. Other especially strong markets were North Carolina and San Diego, both of which have a big military presence.

A key indication that active-duty military turned out: 37 percent of ticket buyers were under age 25, an unusually high ratio for an R-rated adult drama. "It's mind-boggling the way it has played," says Fellman, adding that he received a call from Regal Entertainment president and COO Greg Dunn, whose Knoxville, Tenn.-based chain has a major presence in small towns in Middle America. "They've never seen such fantastic grosses. There are people going to seeSniper who haven't been to the movies in two or three years." Cooper, star of The Hangover films, is another draw for young people.

The bottom line is American Sniper did so well at the box office because the film appeals not just to New York, L.A., and San Francisco, but also to the middle of America—especially cities near major military bases.

The age of the audience skewed much younger than most R-rated films, suggesting that active-duty members of the military and recent vets made up a large portion of the audience.

Hollywood ignores the middle of our country. So much audience out there just WAITING to give their money to these arrogant studios. If only they had the wisdom to hire more writers, producers, and directors who spoke to this audience. It makes you wonder … why don't they?

We keep hearing that all Hollywood cares about is money … well, if that's the case, then why don't they capture the money from this audience by creating more content that appeals to them?

Ask most who've worked in the industry who hold a right-of-center political perspective and they'll tell you that these subjects are so outside the world view of most studio executives (and their gatekeepers) that the content rarely even makes it to their desks for evaluation.

It's hardly breaking news to say the entertainment industry’s values and priorities are antithetical to the rest of America. Just look at the dismal performance of HBO's Girls, a series celebrated and rewarded within the industry but virtually ignored outside of New York and LA.

The question is, will this practice change after the success of American Sniper?