Journeyman presidential candidate Hillary Clinton interacted with some everyday Iowa students in a garage on Tuesday, and taught all of us a lesson in the art of relatable politicking.

On several occasions during the roundtable event, Clinton revealed herself as a true 'triple threat" by demonstrating an array of crucial skills that, when deployed correctly, can make even the most out-of-touch politicians appear somewhat human. 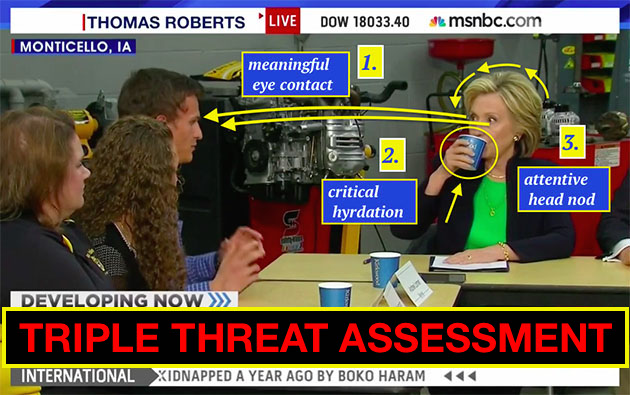 Hillary's ability to perform all three tasks at once may not seem very impressive at first glance. However, as seasoned politicians will attest, this can only be accomplished after years of grueling practice.

Republicans should not let Hill Dogg's otherwise disastrous rollout fool them into underestimating her strength as a candidate. She is a genuine triple threat, and will be a formidable opponent in 2016.