Millionaire and public intellectual Paul Krugman takes homes a $225,000 salary (to do no actual work) from the publicly funded City University of New York. And that’s only a fraction of his total earnings, which include a six-figure salary from the New York Times, where he writes columns that regurgitate Democratic Party talking points in an authoritative voice.

Krugman’s latest is an attack on Gov. Rick Perry (R., Texas), who just took an exceedingly handsome mug shot and may run for president in 2016. Perry is also the governor of the state that leads the nation in job growth, a fact that doesn’t sit well with partisan hacks like Krugman:

You see, while Mr. Perry’s hard-line stances and religiosity may be selling points for the Republican Party’s base, his national appeal, if any, will have to rest on claims that he knows how to create prosperity. And it’s true that Texas has had faster job growth than the rest of the country. So have other Sunbelt states with conservative governments. The question, however, is why.

Krugman assures us that conservative economic policies have absolutely nothing to do with it. The real driver of Texas growth, he argues, is simple: More people are moving there from liberal enclaves like New York City, which have great economic policies, to be clear, but people just don’t want to live there because it’s too expensive.

Okay, but that’s a pretty odd point for a serious economist to make, given the vast disparities in cost of living. Krugman does address that, but only half-heartedly:

In other words, what the facts really suggest is that Americans are being pushed out of the Northeast (and, more recently, California) by high housing costs rather than pulled out by superior economic performance in the Sunbelt.

Well, yeah. But it’s not only housing that is cheaper; everything is significantly cheaper in Atlanta and Houston, as illustrated by this cost of living calculator. In fact, when we plug in Krugman’s $225,000 CUNY salary for comparison’s sake, the difference is pretty stunning. 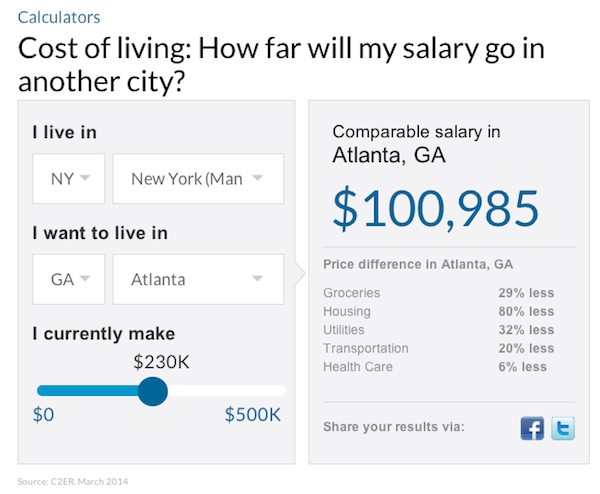 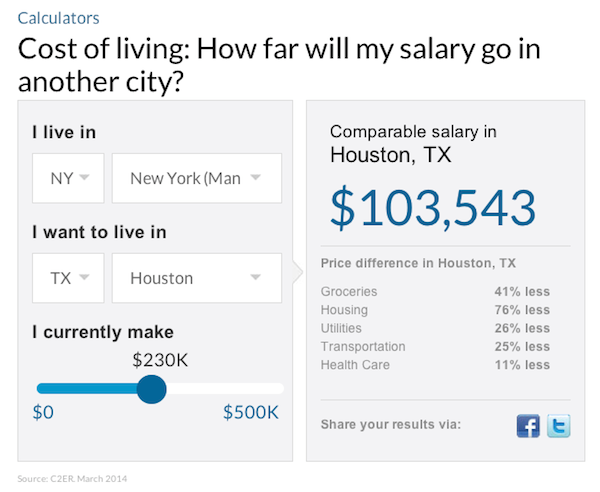 Krugman concludes his column by contradicting his original point. In regard to housing costs, he concedes that high prices are driven by "policies that sharply limit construction" in liberal states. "Looser regulation in the South," he writes, "has kept the supply of housing elastic and the cost of living low."

Then, after acknowledging the contradiction, Krug moves the goalposts and starts rambling about the 1 percent like a serious thinker:

So conservative complaints about excess regulation and intrusive government aren’t entirely wrong, but the secret of Sunbelt growth isn’t being nice to corporations and the 1 percent; it’s not getting in the way of middle- and working-class housing supply.

Sure, and what kind of policies tend to favor the "not getting in the way" approach? Doesn't matter to the Krug, who throws in this deep thought towards the end: "Yes, Americans are moving to places like Texas, but, in a fundamental sense, they’re moving the wrong way."

Yeah, those idiots. Don't they know that in high-cost liberal cities like New York and Washington, D.C., aging hipsters can earn a six-figures salary, financed by taxpayers, and all they have to do is express public concern about the scourge of income inequality? The cocktails may cost $16, but the moral superiority is priceless.