My tongue-in-cheek post yesterday on Rand Paul and 9/11 Truthers inspired a pair of intriguing responses. The first, which I noted in the update, was the finger-wagging from Rand Paul senior adviser Doug Stafford who insisted that Sen. Paul totes believes that terrorists carried out the attacks and that the invasion of Afghanistan was okay, so shut up. It's worth noting that, by omission, Stafford's comment seems to confirm that his boss also believes that Vice President Dick Cheney pushed for the invasion of Iraq in order to enrich his friends at Halliburton.

As I noted in the original post, I don't think Rand Paul is a 9/11 Truther. I simply find it amusing to remind people just how many Truthers are also big fans of his dad, Ron Paul.* And I don't think it's unreasonable to think that he's subtly courting a certain segment of that population when he invokes Truther boogeymen like Halliburton (see: here and here and here, for starters) when discussing the Iraq War. As I said: dog whistles and such.

Of course, there is another segment of the vote the supposedly conservative senator from Kentucky could be courting, and that's the far left. The other amusing response to my post yesterday came from super serial types on the left who insisted that the conspiracy theory about Cheney and Halliburton and war profiteering has nothing whatsoever to do with the conspiracy theories that the 9/11 Truthers believe in. As BuzzFeed's Ben Smith noted in response to my post,

To be fair, this is pretty much Democratic Party conventional wisdom circa 2004 http://t.co/y7iejtUmOG

And indeed, it was—and is—more or less accepted on the left that, yes, Cheney had conspiratorially arranged for the invasion of the totally blameless Iraq following 9/11 in order to fill Halliburton's coffers with filthy lucre (among other devious goals, probably). Hence the annoyance demonstrated by folks from the Nation, Mother Jones, Daily Kos, and Rolling Stone that I would highlight the affinity Truthers have for their own pet theories.

Of course, this further demonstrates the absurdity of Rand Paul's statement and his senior adviser's response. Does Paul think that saying "No no, I'm not a Truther, I'm just a Chomskyite!" is going to be a winning strategy with the GOP rank and file?** Does he stand to gain a ton by courting leftwing voters at Berkeley by peddling his wares to the conspiracy-prone? Or, as Allahpundit suggested yesterday, does Paul risk alienating the hawkish base of the party without gaining a single thing from people who will never vote for a guy with his domestic politics?

*When I started writing about 9/11 Truthers in 2006, it was really, really shocking to see how many of the protesters at various "9/11 for Truth!" rallies showed up with "Ron Paul Revolution" banners. And the Paulistas seem to still have a Truther Infestation problem. For instance: 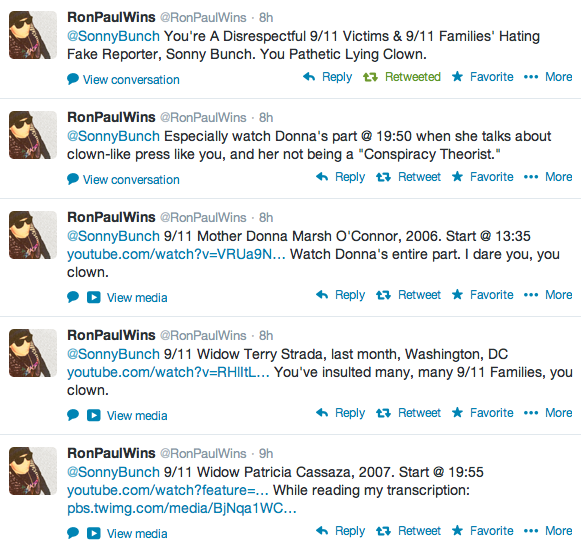 **I predict that the most amusing/annoying response to this piece will be all the folks saying "ZOMG, how dare you compare Chomsky to Rand Paul, Chomsky HATES the Pauls." Please direct all complaints to comments-at-freebeacon-dot-com.