A failed presidential candidate has dominated the media coverage these past few days. Oddly enough, it’s not Hillary Clinton.

Despite the new revelations this week about the massive amounts of money the Bill, Hillary, & Chelsea Clinton Foundation has raised from questionable foreign governments and shady billionaires—something even Clinton’s defenders admit is a problem—the media hasn’t shown much interest in the story. In fact, media coverage of the Clinton Foundation has been dwarfed by the hyperventilating over failed presidential candidate Rudy Giuliani’s remarks about President Obama’s lack of love for America.

Here’s what a mentions search of cable network broadcasts (including local affiliates) over the past two days turned up (as of about 12:30 p.m. EST). 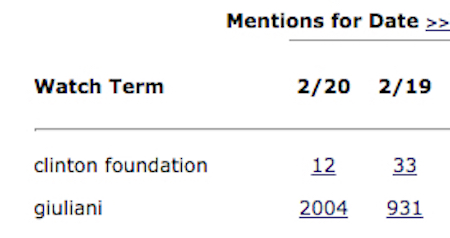 Not including Fox News: 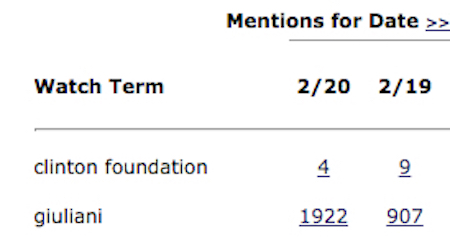 Not including Fox News, that's a disparity of almost 218 to 1. Including Fox coverage, it's about 65 to 1. Expect it to keep growing throughout the day.

When the media has covered the Clinton Foundation story, the result has been resounding criticism and disbelief that the Clintons could be so obsessed with accumulating money and influence. What else is there to say? Either they understand how bad it looks and don’t care, or they are simply clueless. It’s hard to decide which is worse.

Of course, there have also been stories with headlines that might as well have been written by the Clinton Foundation.

Nothing to see here, just a plucky billion-dollar fundraising apparatus vowing to continue its important lifesaving work in the face of petty GOP attacks. Did you guys hear what Rudy Giuliani said about the president?

This post has been updated to include separate breakdowns of media coverage with and without Fox News.

And now we have five Giuliani questions.