Why Hillary Clinton’s Position on Trade Is Total Bullsh*t, Explained

Hillary Clinton has finally taken a position on the Trans-Pacific Partnership (TPP) trade agreement. After helping to negotiate the deal as secretary of state, praising it as the "gold standard" for trade agreements, and describing it in her 2014 memoir Hard Choices  as "the signature economic pillar of our strategy in Asia," Clinton has decided to oppose the TPP.

"As of today, I am not in favor of what I have learned about it," Clinton said in an interview with PBS.

Hillary's change of heart puts her in line with her Democratic primary challengers, including Bernie Sanders, who has vocally opposed the for months. Republican candidates Rick Santorum, Mike Huckabee, and Donald Trump also opposed the trade deal, which President Obama views as a "legacy item."

That Obama is pushing so hard for a free trade agreement, and denouncing his critics as "just wrong," is ironic given his 2008 pledge to renegotiate the North Atlantic Free Trade Agreement (NAFTA), which was signed into law by President Bill Clinton in 1993.

Just like Obama, Hillary Clinton has relentlessly flip-flopped on trade. Essentially, she supports free-trade agreements, unless she is running for office. As a candidate, she pretends to oppose free trade, until she can support it again once elected. Her current opposition to the TPP is total bullsh*t.

For example, Hillary initially supported NAFTA, saying in 1996 that the agreement had "proved its worth." Years later, when she ran for Senate, she said NAFTA was "flawed," and the United States "didn't get everything we should have got out of it." After she was elected to the Senate, however, Clinton supported trade agreements with Australia, Chile, Morocco, Oman, and Singapore.

As a candidate for president in 2008, Hillary joined Obama in aggressively opposing free-trade agreements with South Korea and Colombia. The deal with South Korea was "inherently unfair," she said, and the Colombia deal was something she would "urge the Congress to reject." Both candidates would change their positions after the election. As secretary of state, Hillary praised the passage of trade agreements with South Korea and Colombia, both of which were approved by Congress in 2012. She suddenly became convinced that both agreements were in the best interest of the United States.

Reports have raised questions about whether financial interests played a role in Hillary's flip-flop on the Colombian trade agreement. In 2005, for example, Bill Clinton was paid $800,000 to give four speeches in South America by a business group supporting the Colombian trade deal. At the time, the former president was also seeking to arrange a meeting between the Colombian president and Frank Guistra, a Canadian mining magnate who has pledged more than $100 million to the Clinton Foundation and was looking to expand his business interests in Colombia, namely through the oil company Pacific Rubiales, which signed a lucrative pipeline deal with the Colombian government in 2007.

Several weeks after the pipeline deal was signed, Bill Clinton hosted a private meeting between Guistra and Colombian president Alvaro Uriba at his mansion in Chappaque, New York. Uribe later hosted a gala in New York City where Bill Clinton accepted an award. The event was organized by a public affairs firm run by Mark Penn, who served as Hillary's campaign strategist during her first run for president.

Penn's involvement with the Colombian government led to his resignation in April 2008, when the Wall Street Journal revealed that Penn had met with Colombia's ambassador to discuss the free-trade agreement that Hillary opposed (at the time).

Emails released by the State Department show that Penn contacted Hillary in 2010 to note the "irony" that both she and Obama were supporting the Colombia trade agreement after strongly opposing it during the Democratic primary. 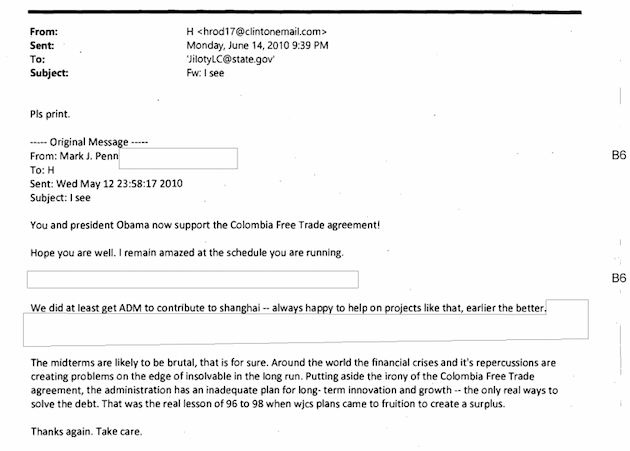 Of late, Clinton is again looking like the kind of candidate who puts polls in front of policy…

Again, the argument here isn't that there aren't reasons to oppose the TPP, but rather that knowing Clinton's record, her advisers, and her past comments about the deal, it's hard to believe Clinton really opposes the TPP deal.

No one will be surprised when, if Hillary becomes president, she happily signs a trans-pacific trade agreement into law. It cannot be repeated enough: Her current "opposition" to the deal is total bullish*t.