"I'm more and more coming around to the idea that we're so very very fucked."

That was the quote you may have seen bouncing around Twitter or Facebook yesterday, connected to a Gizmodo story by Ashley Feinberg that was illustrated with a mushroom cloud.

The story, based on comments from a colorful, anonymous source, stated that Trump had "ordered" important bureaucrats in the U.S. nuclear hierarchy to "clean out their desks" and "leave their posts, even if it means no one is in charge of maintaining the country's nuclear weapons." (Emphasis added)

Wow, scary. No one will be looking after our nukes. Strap on your Pickelhaube and rev up your Mad Max motorbike—the weather forecast shows a 100 percent chance of Trumpocalypse.

This news naturally attracted the attention of left-leaning journalists and pundits because it was sensational and supported their belief that Trump is a lunatic.

"The source later added, ‘I’m more and more coming around to the idea that we’re so very very fucked.’" https://t.co/hD8xLZeUY1

Threshold for OMG keeps going up, but: this is not good. At all. Or normal.https://t.co/XR83ds3pvS By @ashleyfeinberg h/t @NickBaumann pic.twitter.com/YJIsjNAXeC

is anyone else increasingly having thoughts like, "where do i want to see before we all die in fire this year" https://t.co/9s1IGkYlu2

As I write, the story has accumulated over 1.2 million page views. It has also spawned countless aggregated stories. These managed to be even less responsible than the original. 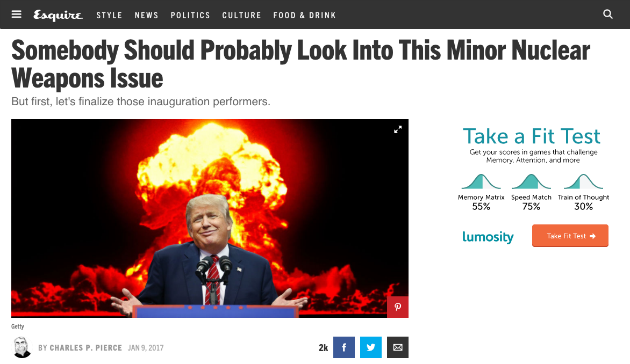 At some late point in the news cycle, a different version of the story emerged. This version was published first in DefenseNews, a somewhat less hip publication than Gizmodo, which is a relative of Gawker (now defunct). It didn't even have a picture of a mushroom cloud, just some old guy. 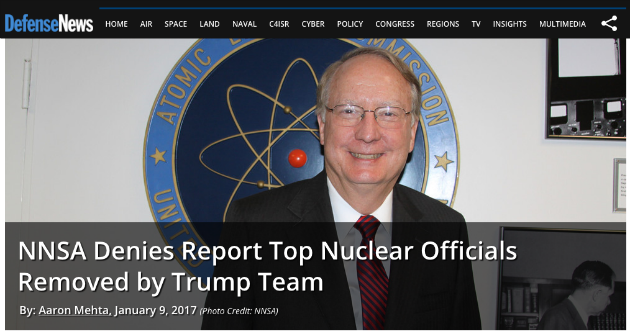 As it turns out, Trump hadn't "ordered" political appointees out at the National Nuclear Security Administration; he had passively allowed their terms to expire.

"The story is not accurate," an NNSA official said in the DefenseNews story. "There have been no discussions between the president-elect’s transition team and any of NNSA’s political appointees on extending their public service past Jan. 20."

Allowing these appointees' terms to end is a break with precedent, as officials in certain agencies are often asked to remain in place to ensure a smooth transition. The NNSA, which has existed for all of 16 years and two presidential transitions, has operated in that way in the past.

As experts pointed out, the move was more of a curiosity than cause for alarm—worthy of a notice in GovExec magazine, not a radioactive article illustrated with a mushroom cloud.

@K8brannen For nuke wonks, it's a minor story that, yes, gets filed under "who's gonna do that job?" Not the way it was reported.

More importantly, the move does not mean that no one will be "in charge of maintaining the country's nuclear weapons," as Gizmodo claimed. As with all other government agencies, when a politically appointed position is vacated, a replacement is selected from the civil service. The roles will be filled by career bureaucrats, who tend to know more about their agencies than political appointees.

So there it is—the story that built a thousand bunkers, in all its deflating nuance. Hours after publication, Gizmodo changed the headline, the body of the story, and issued a stingy correction at the bottom. It will be read by a fraction of the people who saw the original story.