What the Feds Are Teaching in Diversity Training

Men can get pregnant, don't you dare ask for data, and other lessons from diversity training across the federal government

Asking an Asian person for math help is a microaggression. Reverse racism does not exist. Men can get pregnant.

Those are just a few of the lessons imparted to government workers in diversity trainings and presentations in 2021, according to documents obtained by the Wall Street Journal editorial page. The materials, summarized in a December 30 editorial, show how once-fringe ideas have saturated the federal bureaucracy, from the Department of Veterans Affairs to NASA and the military.

One NASA training states that efforts to be colorblind "actually limit us." Another identifies the words "America is a melting pot" and "don't you want a family?" as "microaggressions," along with "asking an Asian person to help with a math or science problem." A third lists "perfectionism" and "data is king" as examples of "common leadership mistakes."

"Value and center lived experience," the presentation says. "Do not demand data in order to accept a person's individual perspective or to utilize that perspective in decision-making."

The focus on subjective experience extends to the Army, where two separate trainings, one for commanders and another for "special staff," feature a vignette about a soldier who wants to "discuss his newly confirmed pregnancy." Another vignette collapses the distinction between gender and biological sex, imagining a urine collector who is uncomfortable observing soldiers who are not "the same biological gender as the observer."

The Army did not respond to a request for comment.

Many of these presentations came after President Joe Biden signed an executive order in June 2021 instructing agencies to beef up their diversity programming. "Such training programs should enable federal employees, managers, and leaders to have knowledge of systemic and institutional racism and bias," the order said, as well as an "increased understanding of implicit and unconscious bias."

The lessons don't come cheap: From 2020 to 2021, the Centers for Disease Control and Prevention alone spent over $300,000 on dozens of diversity trainings, including "Let's Talk About Systemic Racism, Unconscious Bias, and Privilege," "Silence is a Statement: Understanding Race in the Workplace," and "Bambi vs. Godzilla: Dealing with Different, Diverse, and Sometimes Difficult People."

Several presentations use cartoons to illustrate progressive concepts. A training for the Department of Veterans Affairs includes the now-infamous "genderbread" diagram that has been featured in elementary school curricula. A presentation to the National Endowment for the Arts contrasts "equality" with "equity" by juxtaposing two images of people watching a ball game from behind a fence—one in which individuals of different heights are on equal footing and another in which shorter individuals are given a larger leg up than taller ones.

"Justice," the cartoon suggests, would mean tearing down the fence entirely. 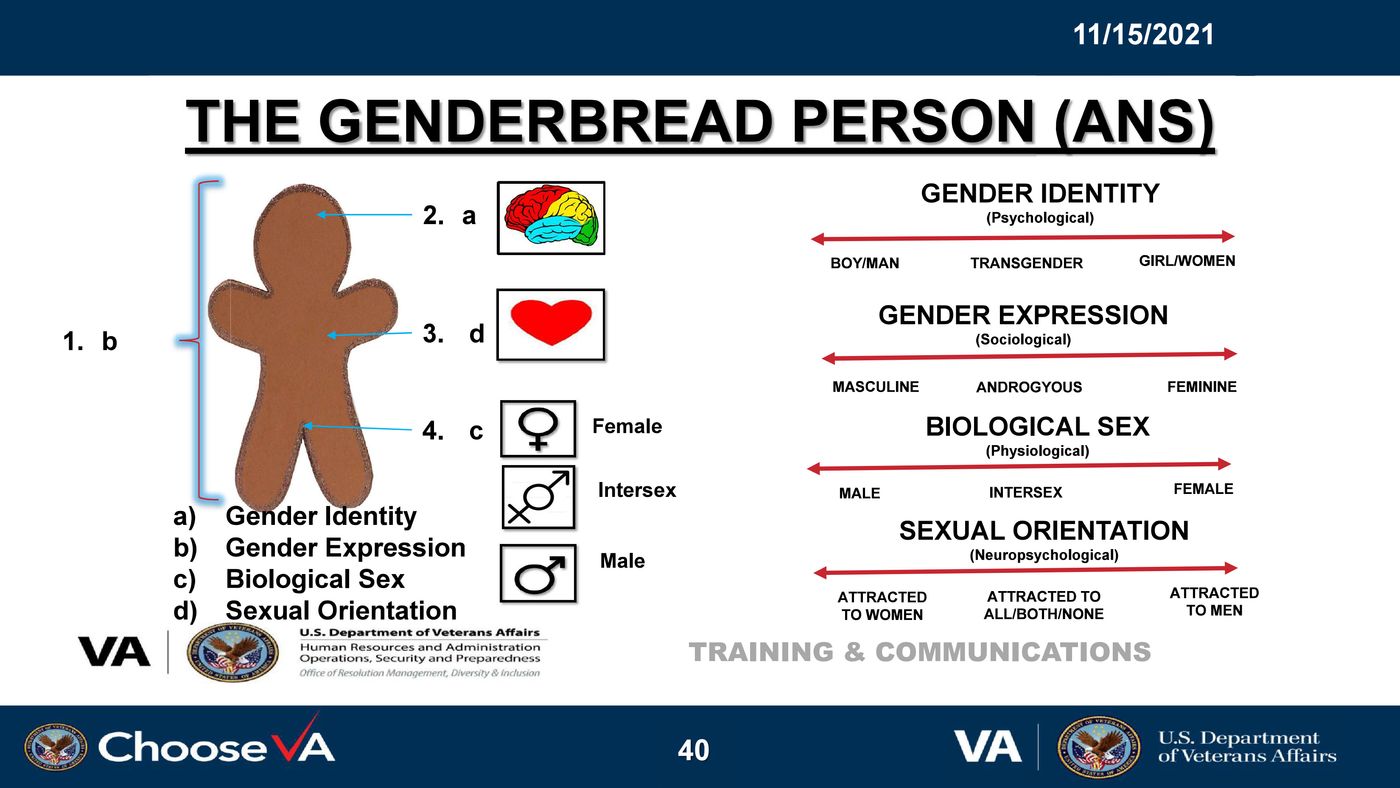 "When patterns of white supremacy are named or questioned," one slide from her talk reads, "predictable defensive responses will emerge." Other slides assert that "reverse racism does not exist" and suggest that "individualism" and "universalism" perpetuate bias.

In May 2022, Underwood became the director of the Office of Diversity, Equity, Inclusion, and Accessibility within the Biden administration's Office of Personnel Management. Her job, according to the office's website, is to carry out Biden's executive order on diversity training.