POTUS surrounds himself only with the best and most serious people

There are few things journalists (and other professional Democrats) enjoy doing more than glorifying so-called experts and wailing hysterically about the "end of democracy." The Washington Post on Wednesday published a report that managed to encompass both.

Headlined, "Historians privately warn Biden that America's democracy is teetering," the triple-bylined piece breathlessly recounts a bull session at the White House as if describing a scene from the front lines of a war zone:

The conversation during a ferocious lightning storm on Aug. 4 unfolded as a sort of Socratic dialogue between the commander in chief and a select group of scholars, who painted the current moment as among the most perilous in modern history for democratic governance, according to multiple people familiar with the discussions who spoke on the condition of anonymity to describe a private meeting. . .

Biden, who was still testing positive for the coronavirus, appeared on a television monitor that was set up next to the room’s fireplace, taking notes as he sat two floors up in the Treaty Room that is part of the White House residence. Senior adviser Mike Donilon also appeared on-screen, say people familiar with the events.

During the discussion, a loud crack of thunder could be heard, which the participants later found out coincided with a lightning strike that killed three people in Lafayette Square, across the street from the White House.

The two-hour meeting, according to the Post, took place during "one of the busiest stretches" of Biden's presidency. (Fact check: He does not seem particularly busy, having spent the past few weeks in isolation while recovering from COVID-19 before jaunting off to the beach in South Carolina.) For Biden, the history chat was "part of a regular effort to use outside experts, in private White House meetings, to help him work through his approach to multiple crises facing his presidency."

Credit where credit is due. Biden has identified a glaring weakness and taken steps to address it. His administration and the Democratic Party writ large are clearly suffering from a lack of overeducated white nerds with expert opinions. Ian Bremmer, an overeducated white nerd with expert opinions about foreign policy, told the Post that Biden should be commended for embracing such "outside-the-box thinking." The meeting on August 4 reportedly focused on the "similarities between today's landscape and the period leading up to World War II," a niche subject that has been relentlessly discussed on cable news and social media since 2015.

Biden started meeting with historians almost immediately after being sworn into office in 2021. They told him he was just like FDR and LBJ, urging the president to "jam through once-in-a-lifetime historic changes" by acting "bigger and faster than anyone expected," even if it meant "chucking the filibuster and bipartisanship." Which is exactly what conventional left-wing pundits and politicians were telling him. So, who exactly are these historians expertly advising the president on the imminent demise of American democracy? That's a great question.

A perennial talking head who attended two of the preppiest schools in America (The McCallie School and Sewanee: The University of the South). Meacham is a professor at Vanderbilt University, where he co-chairs the Project on Unity and American Democracy, and is widely considered by elite experts to be one of the most elite experts in his field. Meacham, who occasionally writes speeches for Biden, came under fire in November 2020 when he appeared on MSNBC (as a paid contributor) to compliment Biden's "poetic" acceptance speech without disclosing the fact that he helped write it.

A distinguished visiting scholar at the University of Virginia and leading expert on Eleanor Roosevelt, she works with Meacham as an advisory board member of the Vanderbilt Project on Unity and American Democracy. Black quit her job to campaign for Hillary Clinton during the 2016 presidential campaign. After the election, the failed candidate hired Black "to serve as her historian and advise her on her archive, oral history project, and other special initiatives." She has written and edited several books, including Modern American Queer History.

Black isn't the only professional historian who advised Hillary Clinton during her 2016 campaign. Wilentz, a professor of American history at Princeton and outspoken Clinton supporter since 2008, was tasked with "helping Clinton understand where and how her potential administration, and that of her husband Bill Clinton, fit into the arc of progressive history over the last half-century or more, according to people who know both him and the candidate." A ridiculous and hilarious job description, especially in light of the election result. In 2019, Wilentz co-authored a problematic and arguably white supremacist letter to the New York Times urging the publication to "issue prominent corrections of all the errors and distortions presented in The 1619 Project."

A staff writer at the Atlantic and a senior fellow at Johns Hopkins, Applebaum attended the Sidwell Friends School in Washington, D.C., Yale University, the London School of Economics, and Oxford. A British magazine named her one of "the world's top 50 thinkers for the COVID-19 age." Elite experts agree that Applebaum is among the elite proponents of hysterical wailing about Donald Trump and the perilous state of American democracy. When asked in April about the mainstream media's efforts to censor stories about Hunter Biden's laptop, Applebaum said the contents of the laptop, which revealed information about Hunter's controversial business relationships, were "totally irrelevant" and not "interesting."

In June, the so-called expert used racially charged language to attack one of the most successful black figures in American history. "Language of SCOTUS decision on Roe has an ominous tone of anger and revenge—especially Clarence Thomas’s concurring opinion," Beschloss wrote, invoking the racist caricature of black men as angry and violent.

Speaking of white supremacy, there wasn't a single historian of color at the meeting with Biden earlier this month. The group advising the president included three white men and two white women. White House adviser Tom Donilon was also present, as was former Harvey Weinstein adviser Anita Dunn. Biden's speechwriter, Vinay Reddy, was the only person of color in attendance, but he went to a state school. 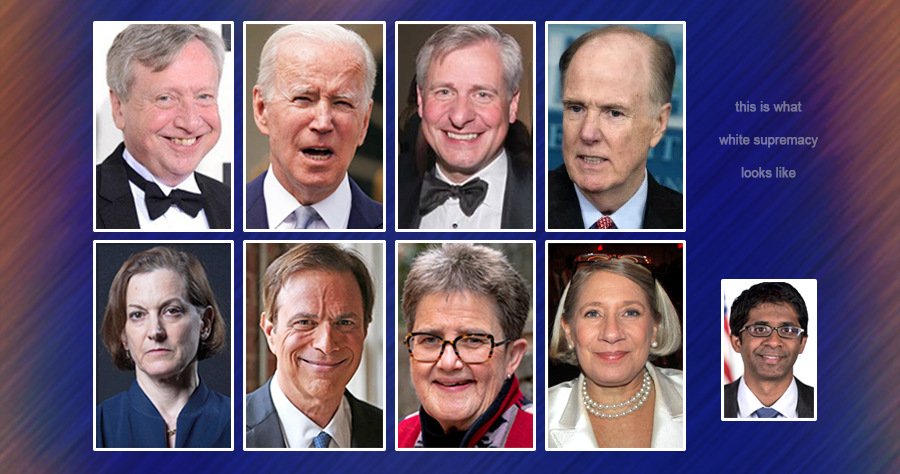