A series of redacted emails obtained by Sen. Chuck Grassley (R., Iowa) as part of an investigation into a nonprofit group that granted U.S. taxpayer funds to the Islamic Relief Agency (ISRA), a terror-tied charity sanctioned by the American government, allegedly show that Power was "involved in efforts to delist ISRA from the Specially Designated Nationals and Blocked Persons (SDN) list" during her time as the U.N. ambassador, according to a letter Grassley sent last month after Power was nominated for the USAID job.

Delisting ISRA would pave the way for it to again receive U.S. taxpayer dollars from USAID and other government agencies. It also would serve as a sign to the international donor community that it can resume sending ISRA money, despite outstanding concerns it is still working with designated terror organizations, as cited by the U.S government in its original designation.

Grassley demanded that Power provide him with further information about the 2015 emails regarding ISRA’s status and explain "why you would take an interest in advocating on behalf of a foreign sanctioned entity." The senator asked for this information by March 4, but Power has yet to respond, according to sources familiar with the matter.

The issue threatens to complicate Power’s yet-to-be-scheduled hearing before the Senate Foreign Relations Committee. While Power is seen as qualified for the job, accusations that she intervened on behalf of ISRA after it was sanctioned could generate opposition from Republican lawmakers. As the head of USAID, Power would oversee a large portion of the foreign aid budget, including money for nonprofit aid groups around the world. The matter is of particular interest to Grassley as part of his investigation into how USAID awarded hundreds of thousands in taxpayer dollars to World Vision, a nonprofit group that funneled a portion of that government money to ISRA.

The controversy can be traced back to early 2015: Power and her staff petitioned the Treasury Department’s Office of Foreign Assets Control, which implements terror-related sanctions, to review ISRA’s designation under U.S. terror laws, according to a copy of the redacted emails obtained by the Washington Free Beacon. At the time, ISRA was under international pressure over its ties to terror organizations and status as a sanctioned entity under U.S. laws.

Jeremy Weinstein, Power’s then-deputy, petitioned top OFAC officials "to initiate a formal review" of the related terror designations "without a formal request" from the charity itself. Initiating a review in this manner is highly unusual, according to current legal statutes. Those familiar with the matter said that under normal circumstances the charity itself would have to petition the U.S. government to review its case. 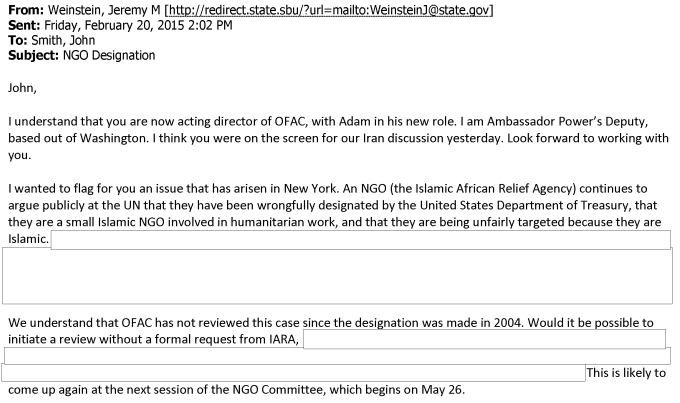 The Islamic African Relief Agency—an alternate name for ISRA that also is included in the group’s terror designation—"continues to argue publicly at the U.N. that they have been wrongfully designated by the United States Department of Treasury, that they are a small Islamic NGO involved in humanitarian work, and that they are being unfairly targeted because they are Islamic," Weinstein wrote to OFAC’s former acting director John Smith.

Smith later agreed to conduct a review, saying, "We received word of U.N. interest in this matter a week ago, and we’ve already asked our investigators to review the case, the underlying evidence, and any newer evidence that we might have."

Other emails from around that time show Power and her aides petitioning various entities to "follow-up on what sounds like a long-running issue related to our designation of Islamic African Relief Agency," according to another highly redacted email chain on the matter. 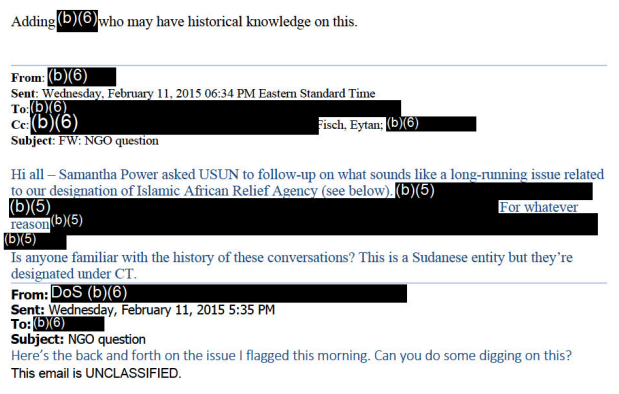 In light of the emails, Grassley requested that Power explain, "If you were aware of ISRA’s extensive history of financing terrorists, why did you feel it prudent to advocate for overturning their designation?"

In addition, Grassley wants information about whether Power’s office consulted "with legal counsel regarding the legality of requesting a review outside the general OFAC parameters." He also asked: "If you are confirmed, will you commit to doing a full audit of USAID funds in order to ensure they are not going to benefit terrorism?"

USAID declined to comment on the matter. Former U.S. officials familiar with the matter provided conflicting accounts of what exactly took place.

One former U.S. official who worked at the U.N. at the time the ISRA matter was being debated said Power’s requests for information were not part of an effort to delist the group. Power, the source said, wanted to gather as much information as possible about ISRA in order to ensure the U.N. and its member nations blocked ISRA from receiving accreditation from the U.N.’s NGO Committee, which oversees grants for nonprofit organizations.

"Ambassador Power was never involved in any effort to delist this organization," the former official, who was only authorized to speak on background, told the Free Beacon. "We reached out to the Treasury Department just to ask them to confirm that their assessment of this organization was accurate and up to date." This was done "to better arm ourselves to effectively prevent this organization from being accredited, which would have legitimized it."

The source further said that "people are drawing elaborate linkages" about the emails "that absolutely aren’t there."

But a former senior Trump administration official familiar with what took place disputed this account. That source said Power and her aides "showed incredibly bad judgment. The Trump administration spent the next four years at USAID trying to extract ourselves from the historical willingness to overlook World Vision's direct connection to a terrorist-sponsoring organization."

The Trump-era official, who also spoke only on background, said the ISRA funding scandal is "unfortunately symptomatic of how USAID, and we fear how Samantha Power herself, will view USAID's implementing partners."

Cliff Smith, Washington project director for the Middle East Forum, the think-tank that first unearthed the emails sent by Power’s staff regarding ISRA, said many questions remain about why the former U.N. ambassador elevated the issue.

"Samantha Power's actions are particularly troubling as they show a lack of concern for international aid that might go to terrorists, and this issue is squarely in the center of the job she is being asked to do as USAID administrator," Smith said. "She should fully answer all of Senator Grassley's tough questions."