Gideon, who has failed to appear at any of the scheduled primary debates, has made an anti-corporate message a central part of her campaign. On Tuesday morning, however, she participated in a fundraiser with Moderate Democrats PAC, which primarily fundraises from corporate sources. Of the $822,800 the PAC has raised so far this election cycle, $522,500 came from corporate PACs. This amount includes thousands from PACs tied to Citigroup, Boeing, Lockheed Martin, Exxon Mobil, and dozens of others. Tuesday's virtual meet-and-greet with Gideon—which was not publicly announced—was for the PAC's "Trustees and Executive Members," according to an invitation obtained by the Washington Free Beacon. 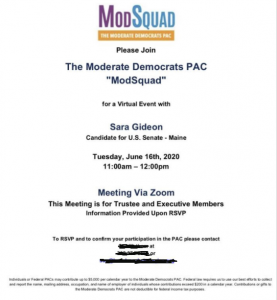 Gideon, Maine's speaker of the house, is the favorite to win the state's July 14 primary and go on to challenge Republican senator Susan Collins. The race is expected to be a close contest with Congress's upper chamber on the line. Gideon, backed by the Democratic establishment, has repeatedly refused to debate her primary opponents, human rights activist Betsy Sweet and criminal defense attorney Bre Kidman.

Over the course of the primary campaign, Gideon has touted her commitment that she "isn't taking any money from corporate PACs in her campaign or as a U.S. Senator so that Maine people will never have to doubt whose interests she's representing in the Senate." Despite her pledges, however, Gideon's campaign has received money from PACs that are heavily funded by corporate PACs. She has additionally collected tens of thousands from out-of-state lobbyists.

The Gideon campaign and the organizer of the fundraiser did not respond to inquiries into the Democrat's involvement and the other individuals who participated in the event. Gideon joined the virtual event with the group's unknown trustees and executive members just days after dodging a primary debate with two of her Democratic rivals.

"[Gideon is] refusing to appear in forums where she would have to answer unscripted questions without being able to simply end the event when she got one she didn’t like," Kidman told the Free Beacon last week. Kidman added that two Maine groups had previously tried to schedule forums with the candidates but axed the plans after Gideon and another candidate, who has since dropped out, refused to participate.

The Maine house speaker's now-dissolved state leadership PAC received substantial funding from numerous corporations including Anthem BlueCross BlueShield, AT&T, and American Express. Gideon was hit with numerous ethics complaints over the PAC's operations. An ethics watchdog unanimously found that she had violated state laws after reimbursing herself for political contributions to federal campaigns from the corporate-funded PAC.

Gideon recently accused Collins of prioritizing corporate donors in an advertisement. The ad received three "Pinocchios" from the Washington Post, which called its contents "highly misleading." 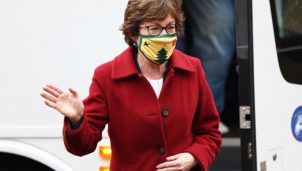