'Young enough to be his granddaughter'

Tom Nichols, a Harvard professor and former Lincoln Project adviser who spends hours on social media proclaiming his moral and intellectual superiority over his fellow Americans, is in hot water after staying up way past his bedtime and announcing his "crush" on a much younger woman.

"I'm probably not going to buy this mattress but I definitely have a crush on this quirky actress," the moral titan tweeted at 1:40 a.m. He included a screenshot of a television ad for Purple mattresses starring actress Mallory Everton, 32. She is dressed in provocative dirndl for the role, which appears to be based on the "Goldilocks and the Three Bears" fairy tale about a little girl who trespasses in the woods. 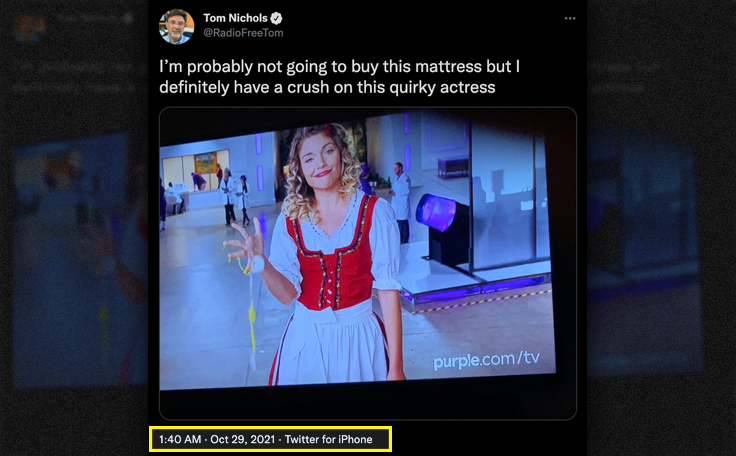 Nichols, who is married, will celebrate his 61st birthday on Dec. 7, the date of the infamous Japanese sneak attack on Pearl Harbor. He is the author of The Death of Expertise, a lamentation on the fact that "average citizens believe themselves to be on an equal intellectual footing" with people like Tom Nichols.

In an effort to establish his intellectual bona fides, the ex-Lincoln Project guru has tweeted more than 386,300 times since joining the social networking website as @RadioFreeTom in January 2012, which works out to an average of more than 100 tweets per day. That is way too many tweets for an adult man to be posting on a daily basis, a Washington Free Beacon analysis has determined.

Several hours after posting the lascivious tweet, Nichols was called out for his deplorable behavior. "Did you get hacked? If a guy your age said this about your daughter how weird would you feel?" wrote Twitter user @BranMuffin824. Nichols stans immediately rode to the expert's defense, but their intellectually profound arguments fell on deaf ears.

"Still weird for him to talk about in his 60s. Also, some opinions are fine to have maybe just don't always share them," @BranMuffin824 wrote in response to @LucyLyrical, a Nichols apologist. "Especially when you're the guy that we look to for decency, who is always judging others for indecency. … Pick who you are."

It was Nichols's hypocrisy that @BranMuffin824 found particularly galling. "Honestly, if it wasn't for the way Tom presents himself, I wouldn't be bothered by it either," the Twitter user told the apologist.

Nichols cut ties with the Lincoln Project earlier this year after the Democratic super PAC came under fire for enabling the predatory sexual exploits of disgraced cofounder John Weaver. But shortly after the Lincoln Project exonerated itself of any wrongdoing—based on a review conducted by a law firm whose senior partners donated to the group—Nichols appeared as a guest on the Lincoln Project podcast to discuss why some Americans don't deserve "freedom."

The Lincoln Project, which raised almost $100 million from liberal billionaires and #Resistance wine moms during the 2020 election cycle, is struggling to maintain its relevance in the absence of former president Donald Trump. The super PAC's official Twitter account, for example, has lost more than 100,000 followers since January amid reports that the group's founders are attempting to turn the Lincoln Project into a vehicle for "generational wealth."

Even George Conway, who cofounded the Lincoln Project in 2019, has called for the organization to be disbanded due to the questionable financial practices of its almost exclusively white male leadership team. The super PAC "should shut down, absent full disclosure of its finances," George Conway, an uncompensated founding member, wrote in March. "[T]here's simply too much money that hasn't been accounted for, and, I fear, never will be."