Sales of 'mocktails,' other non-alcoholic beverages have surged since November, analysis finds

It goes without saying that the election of President Joe Biden has ushered in an era of unprecedented American decline. The botched withdrawal from Afghanistan was a national embarrassment, and the country's preeminent sports teams have suddenly found themselves unable to win.

New data suggest the situation is more dire than even the most cynical observers could have imagined. A recently published analysis from the global e-commerce company Pattern found that sobriety has experienced a "resurgence" in the United States since Biden's election in November.

The analysis, which tracked consumer demand on Amazon for "mocktails" and non-alcoholic beverages over the past three years, revealed a number of disturbing developments in the drinking habits of American citizens during the Biden era.

For example, U.S. consumer demand for all non-alcoholic drinks in the first seven months of 2021 is up 60 percent compared with 2020, the final year of Donald Trump's historic presidency. Demand for non-alcoholic beer, a disgusting affront to the values on which this country was founded, is up an astonishing 85 percent compared with the previous year.

Biden is a teetotaler, but that hardly explains the explosion of American sobriety on his watch. Trump also doesn't drink, but he loves his country with all his heart. Enough said. 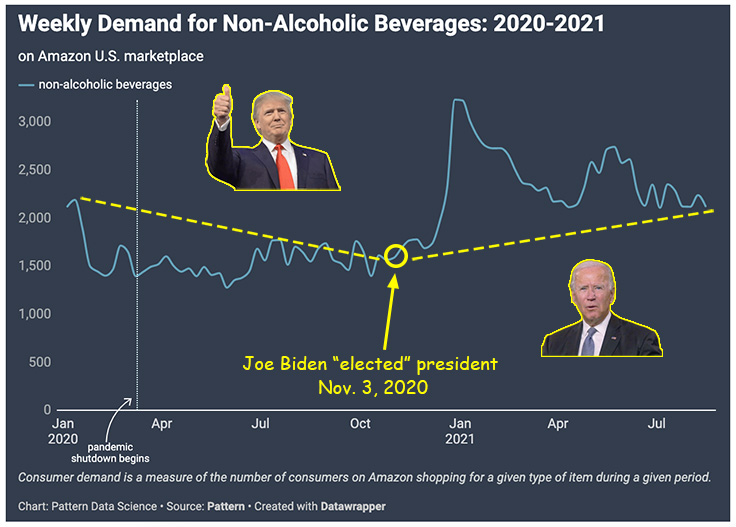