FORT WORTH, Texas—Watching a Donald Trump rally on television doesn’t do it justice.

That is not to say it’s not entertaining to watch on T.V.—I have enjoyed every second of the Trump speeches that have aired on cable networks—but hearing his rap while standing in the middle of a packed crowd of Texans who worship him is a whole different animal.

I was at my first Trump rally in Fort Worth on Friday and the excitement began before I even stepped foot in the convention center.

Outside it was more like a sporting event than anything political. Trump fans walking in were fired up and looked as though they had tailgated the noon event for hours. They sparred with opposing fans driving circles around the event flying Texas-sized Mexican flags out the windows of their pickup trucks.

Most were already decked out in their finest Trump swag, but those who weren’t could pick some up from the many vendors hawking their own custom Trump car decals, hats, shirts, pins, and probably anything else you could think of. 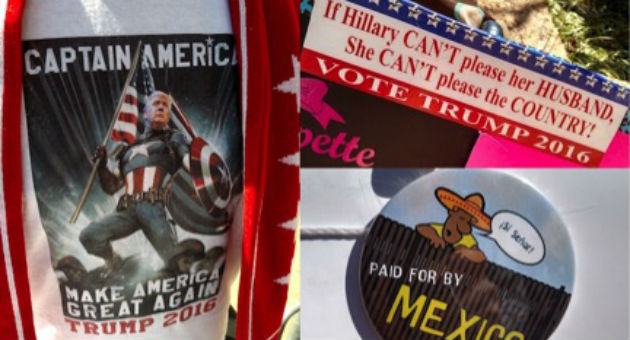 Once I got inside, I set myself up in the center of the large room right in front of the camera pit. We waited in the main hall listening to music from the Rolling Stones and Elton John that seemed to get louder with every song.

Trump was predictably taking his time talking to the media with his new buddy, New Jersey Gov. Chris Christie, leaving me surrounded by a restless crowd of Trump fanatics. It was a social crowd, and everybody wanted to tell everybody around them why they are in Trump’s corner.

"Donald Trump doesn’t drink, you got to respect that about him," one college-aged kid told his friends. "I gave up drinking for Lent and have been loving it."

"I have loved Donald Trump ever since The Apprentice," said an older lady, who was unfortunately too short to catch a glimpse of Trump. "I still can’t believe you never watched The Apprentice," she chided her friend. She also spent a few minutes scolding a Mexican man who was holding a sign that made it pretty clear he was a Trump supporter. They eventually ironed out their differences. 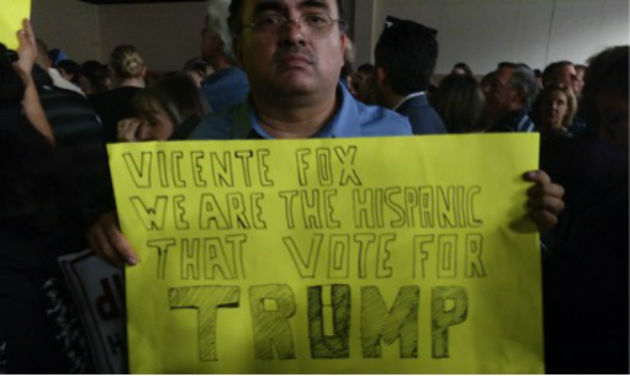 Like an episode of The Bachelor, there was a lot of concern among the crowd that people weren’t "there for the right reasons."

"So, you just here for the show or you actually support Trump?" one guy asked everybody that crossed his path as we waited for Trump to grace the stage.

They all responded that they would be voting for Trump.

At the start of every song that blared from the speakers, people readied their phones to get a picture of Trump, each time thinking that the new song could be his entrance music. At one point the music hit such a pitch that one of the college kids behind me asked his friend, "Are we at a rave right now?"

I understand getting the rave vibe, but to me it felt more like we were waiting for some rock legend to hit the stage. In Fort Worth, the people had to wait even longer than usual for the rock legend, because Trump had an opener.

Christie popped out first and the crowd didn’t immediately cheer. Then he said that Trump is the person who can "make sure that Hillary Clinton doesn’t get within ten miles of the White House" and the crowd went nuts. Talking to a crowd like this must have felt great for Christie, who whet its appetite by calling one of Trump’s opponents, Sen. Marco Rubio (R., Fla.), a "no-show senator."

Once Trump took the stage, he delivered to the crowd exactly what it craved.

Friday’s target was Rubio, who had torn into him in Trumpian fashion earlier that morning over spelling mistakes in his tweets and wearing makeup to hide his sweaty upper lip. Trump was obviously going to respond with fury, but nobody could predict exactly how.

It was a bit awkward when Trump began the personal attacks on Rubio—I sensed hesitation from some of the people around me, but the laughter and cheering from the rest of the crowd was contagious. Trump’s most creative insult was that Rubio wears makeup to hide his big ears; saying that Rubio sweated so much he looks like he jumped in a pool with his clothes on before debates was a close second.

By the time Trump said that he thought Rubio "was going to die like a frightened little puppy," he had the whole crowd hooting and hollering along with him. This continued when he remarked that Mitt Romney was a "loser" who "walked like a penguin."

Trump fed off the crowd and praised it continually. He stopped to admire some guy’s "big beautiful beard" and remarked that one woman, a "tough cookie," could have stopped the San Bernardino terrorist attacks if she was there with her gun.

As folks flooded out of the convention center, it was clear that they loved Trump back. They talked about how fantastic he was and stopped to buy more Trump stickers to put on their trucks. More importantly, they lined up at trailers the Trump campaign set up to enlist volunteers to knock on doors and make phone calls ahead of Tuesday’s primaries.

Getting people to laugh about Rubio’s ears won’t win Texas for Trump, but creating a volunteer army out of the people who turn out for his raucous events might just do the trick.