As millions of Afghan women are abandoned to subjugation and torture at the hands of the Taliban, President Joe Biden's Defense Department will celebrate "Women's Equality Day" on Thursday by hosting a 5K run at Scott Air Force Base in Illinois.

"Women's Equality Day gives us an opportunity to reflect on the many benefits of true equality and the role of women in our public life," the military's diversity and inclusion officers wrote in an email announcing the event. No registration is required to participate, and prizes will be awarded to the top three finishers.

Meanwhile, on the other side of the world, Taliban soldiers are murdering Afghan women for not wearing burqas. On Tuesday, in a scene right out of the Handmaid's Tale, the militant group's official spokesman urged women to stay home until "women related procedures are in place." Taliban soldiers, he warned, are "not trained" to respect them or refrain from violent acts of misogyny.

A military veteran with knowledge of the email announcement told the Washington Free Beacon they were appalled, given the unfolding disaster in Afghanistan and the Taliban's medieval approach to women's equality. "It shows a complete lack of situational awareness, and shows how inept this administration is in handling a crisis—that they push woke bullshit during this time," the veteran said. "Soldiers will hate it."

The Department of Defense (DoD) recognizes August 26, 2021, as Women’s Equality Day. On this day, we celebrate the ratification of women’s suffrage in the U.S. as well as the heroes who faced violence and discrimination to propel the women’s voting rights movement forward. It is a major milestone still celebrated in the women’s rights movement today.

This year’s theme is "Valiant Women of the Vote: Refusing to be Silenced." DoD recognizes the 19th Amendment that serves as a reminder to continue pursuing gender equality. As an employer of choice, DoD is committed to ensure we create an environment for all women to serve freely and safely. We embrace diversity, equity, inclusion, and accessibility, and acknowledge our commitment to afford women the opportunities to represent our nation as role models, mentors, and lead at the highest levels within the Department.

The U.S. military "must stand together," Johnson wrote, and "acknowledge that inequality and discrimination" against women is "antithetical to our core values." In the interest of providing crucial context, here is a sampling of headlines from Aug. 16, the day the memo was circulated:

Earlier this week, as U.S. diversity and inclusion officers were organizing the 5K run for women's equality, a young Afghan woman was describing her state of mind as the Taliban solidified its control of the country: "I want to kill myself, and I am not alone, many women in Afghanistan are broken now." 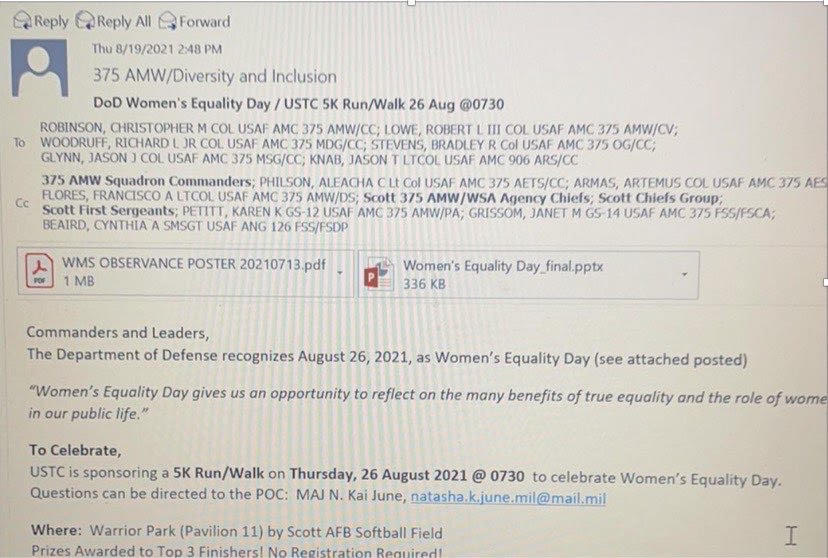