A Democratic congressman best known for comparing former president Donald Trump to 9/11 architect Osama bin Laden was spotted without a protective face mask at one of the busiest airports in the United States.

Photos obtained by the Washington Free Beacon show Rep. Sean Casten (D., Ill.) chatting with a masked companion at O'Hare International Airport in Chicago. In the photos, which were taken early Tuesday morning, the maskless congressman appears to be holding a drink-like object, presumably in an effort to evade the Centers for Disease Control mandate for transportation hubs.

"Masks are required at O'Hare," the airport states on its website. It links to the CDC page explaining the mandate, which "require[s] people to wear masks" indoors unless "eating, drinking, or taking medication for brief periods of time."

An airport source told the Free Beacon the amount of time Casten spent without a mask far exceeded the "brief period" allowed under CDC guidelines. Either way, scientific experts have warned that taking your mask off at any point while traveling is potentially dangerous, even for vaccinated individuals.

"Please don't ignore science," Casten has urged his social media followers. "Wear a mask. Wash your hands. Stay safe." Wearing a mask, he wrote last month, was not only "the right thing to do scientifically," but also "the most responsible thing to do" in terms of protecting others.

Casten is merely the latest Democrat to reject science and put lives at risk by declining to cover his face in a public indoor setting. In August, for example, Rep. Sean Patrick Maloney (D., N.Y.), the chairman of the Democratic Congressional Campaign Committee, attended a maskless wedding at an estate in France and was photographed without a mask at an indoor art studio in Italy.

Days later, Sen. Elizabeth Warren (D., Mass.) was a maskless guest at Interior Secretary Deb Haaland's wedding in New Mexico. The indoor gathering was almost certainly in violation of state masking guidelines. In September, senior Biden administration official Samantha Power was spotted maskless on an Amtrak train in blatant violation of federal law, which "requires all customers and employees to wear a mask at all times while onboard trains and in stations, regardless of vaccination status or state or local laws."

Alexandria Ocasio-Cortez, the celebrity activist and part-time member of Congress, was photographed walking the halls of Congress without a mask over the summer. Rep. Rashida Tlaib (D., Mich.), another member of the so-called Squad, recently admitted that she only wears a mask when her political opponents are watching. 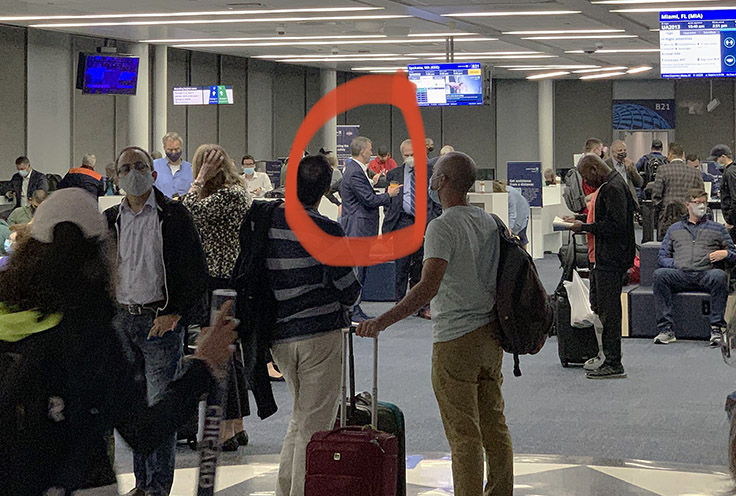