Mahony's campaign said in a Tuesday press release that he was exiting the race immediately due to a "family health concern."

"Citing a family health concern, Mahony will no longer be able to devote the time and energy that is necessary to run a viable campaign," the release said. "The campaign will cease operations immediately and Mr. Mahony asks for privacy during this time."

Mahony was the only Democratic candidate that had filed to run against Cotton, who is up for reelection for the first time in 2020. Mahony, who unsuccessfully ran for a House seat in 2018, had launched his campaign in May.

The Democratic Party of Arkansas did not immediately respond to a request for comment. It is unclear whether Democrats will be able to substitute in a candidate for Mahony.

Mahony's exit from the race marks a new low for Democrats in Arkansas, which was not so long ago a competitive state. As recently as 2010, Democrats held both the state's U.S. Senate seats, three of four of its House seats, as well as the governor's mansion. Now all are controlled by Republicans.

Cotton will still face both a Libertarian and an independent candidate next November. He was heavily favored to win reelection prior to Mahony's surprise exit.

Mahony's full statement can be viewed below: 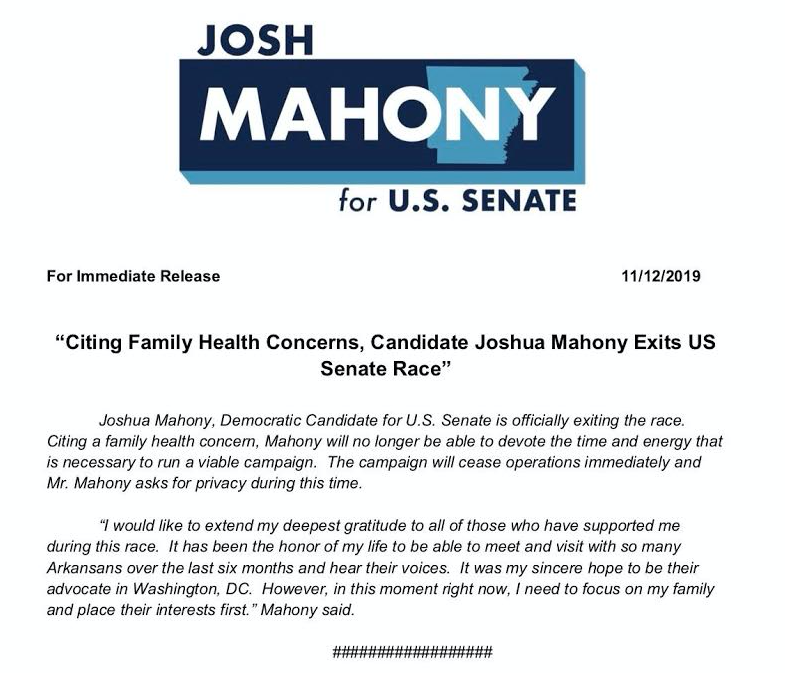