The freshman duo, particularly Omar, have found themselves in hot water over the past two months. During a "progressive town hall" on Feb. 27 at Busboys and Poets in Washington, D.C., Omar remarked on the "political influence" in the United States "that says it's OK to push allegiance to a foreign country" while speaking in relation to Israel. Tlaib was at the event alongside Omar.

Prior to the event, Omar found herself under fire for a tweet in which she claimed the American Israel Public Affairs Committee (AIPAC) was funding her critics. Omar pushed back against her Democratic colleagues following the event and has continued to make such remarks publicly.

Despite, or perhaps because of, the controversy over her comments, Omar and Tlaib (the latter regularly defends Omar's remarks), both saw spikes in campaign contributions, filings show.

Throughout the first quarter of the year, which spans from Jan. 1 to March 31, Omar's campaign pulled $822,024.29 in contributions from individuals, $414,000 of which came from small donors, or individuals providing less than $200 in total contributions to the campaign.

Most of the money was raised by the campaign following the Feb. 27 event that led to a stream of public headaches for Democrats. Omar's campaign hauled in just $24,331 in contributions in January while taking in $115,007 in donations in February—$23,360 of which came the day after the D.C. townhall event with Tlaib.

However, throughout March the congresswoman hauled in $265,429 in donations, according to an analysis of her campaign records.

A closer look at the data reveals a notable jump in contributions to Omar in the period specifically following her and Tlaib's Busboys and Poets appearance. In the pre-appearance period, she raised an average of $6,443 per day; after her appearance, that figure jumps to $11,552 per day on average. 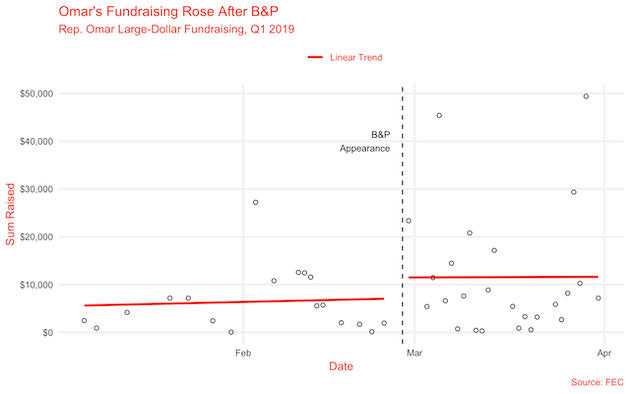 Tlaib also experienced a drastic increase in campaign contributions at the same time as Omar.

The data show that Tlaib's receipts show an even more dramatic increase following the Busboys and Poets appearance than Omar's do. In the pre-appearance period, she averaged just $1,179 per day in contributions; after the appearance, that figure rises to $7,146, driven by a number of major March appearances. 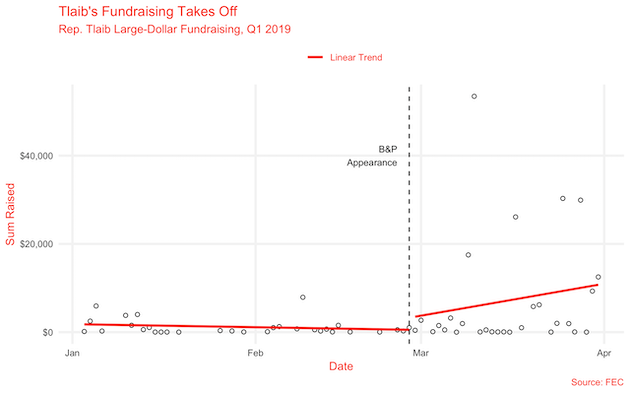 The lion's share of Omar's funding comes not from her home state of Minnesota, which gave her just under $10,000 in the first three months of 2019, but from Massachusetts. The Bay State gave her $84,610 pre-appearance. But after she rose to national attention, residents nearly doubled that number, giving $165,667 in the post-appearance period. 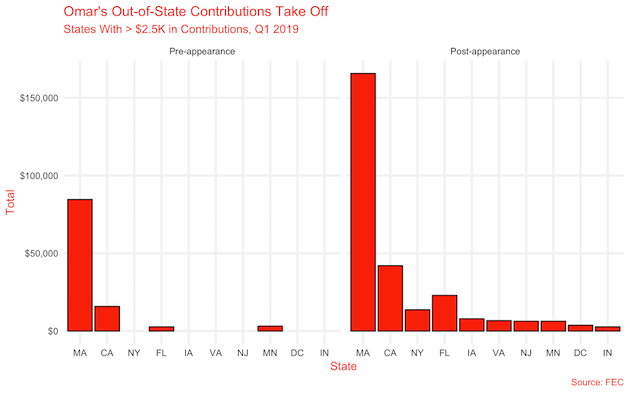 Tlaib received little money before her rise to prominence; her best source was Illinoisans, who gave her $11,900 in the lead-up to her comments. But national attention netted her national donors, including $35,375 from New Yorkers and $140,712 from residents of California. 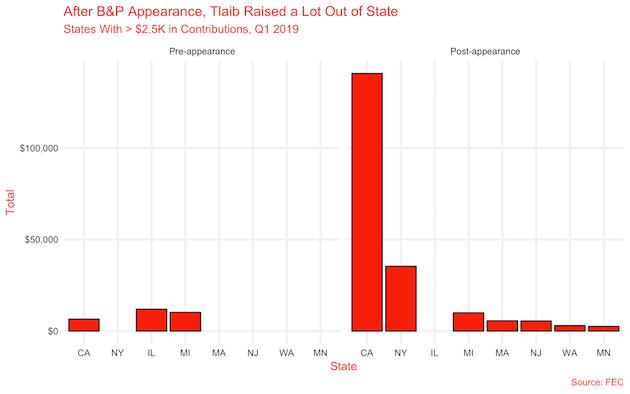 Omar's and Tlaib's campaigns did not respond to requests for comments by press time.