MapLight reporter Andrew Perez noted on Twitter that a billboard put up in Times Square attacking Ocasio-Cortez was paid for by the Job Creators Network, which has also given money to lobbying firm Berman & Co. and GOP political strategy firm Cavalry LLC. 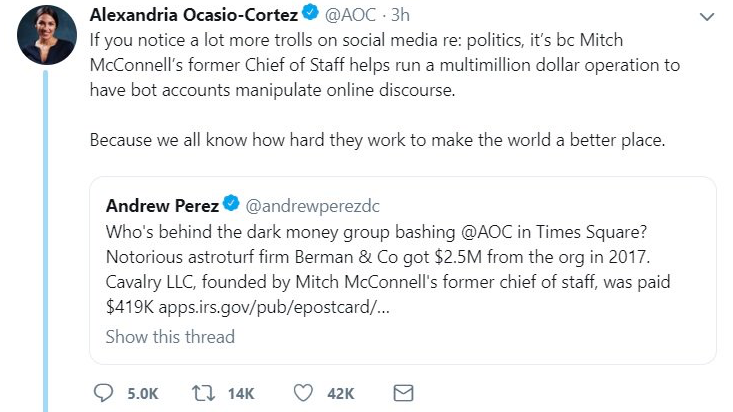 Lmao wtf is she talking about? https://t.co/F07PNKveso

"Long story short, no, we don’t buy or run bot accounts," Duncan told the Washington Free Beacon. Ocasio-Cortez's office did not respond to a request for clarification.

When questioned on social media about her claim, Ocasio-Cortez pointed to the Perez tweet's use of the term "astroturfing" and argued that, "‘Astroturfing' is the term for those kinds of bots and online activity."

The reporter is quote tweeted below. "Astroturfing" is the term for those kinds of bots and online activity.

"Astroturfing" is political slang for activities that appear to be grassroots, but are actually backed by the establishment. But Perez's original tweet accused Berman of engaging in "astroturfing," not Cavalry. And while "astroturfing" can theoretically include bot accounts, the two are not synonymous as Ocasio-Cortez seemed to believe.

Eventually Ocasio-Cortez deleted her original tweet, saying she wanted to "make sure details are solid."

Heads up – I’m deleting a tweet about astroturfing bc I want to make sure details are solid.

Dark $ is hard to track, & the practice of astroturfing to manipulate public opinion is notorious. Want to make sure any comments about it are thorough. Quote tweet will be RT’d ✌🏽