Also not sure Hamas is a terrorist group

Despite the launching of more than 800 rockets from Gaza into Israel in 2012—including hundreds in the past week—the Times expressed uncertainty about whether any rockets have been fired at all. The Israeli military operation that commenced today is "in response to what Israel called repeated rocket attacks," according to the Times.

The Times is also uncertain about the nature of Hamas, a U.S.- and Israeli-designated terrorist organization. The Times reports that Hamas is a "militant organization regarded by Israel as a terrorist group sworn to Israel’s destruction."

The Times’ description is contradicted by Hamas, the leaders of which regard Hamas as a terrorist group sworn to Israel's destruction.

"This is a nation of martyrdom and martyrdom-seeking," said Hamas’ leader Ismail Haniyah, who perhaps was chastising the New York Times for liberal bias. "A nation of jihad for the sake of Allah," he affirmed.

Abdallah Jardu, another Hamas official, also contradicted the New York Times. The Jews "want to present themselves to the world as if they have rights, but, in fact, they are foreign bacteria—a microbe unparalleled in the world," he said.

Jardu concluded, "May [Allah] annihilate this filthy people who have neither religion nor conscience."

Potentially in response to Hamas outrage at the Times' effort to cast doubt on the group's goals and tactics, the Times scrubbed the report after publication. As can be seen below, the paper no longer insinuates that Hamas's rocket attacks are merely an Israeli allegation. 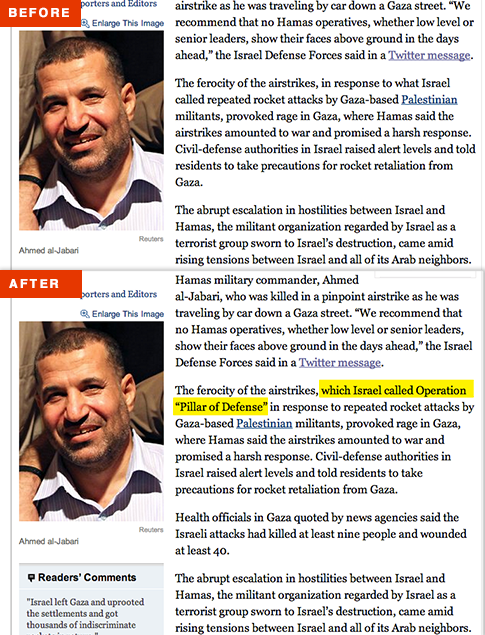