Rep. DeFazio has been a member of Congress since 1987, but Republicans are increasingly hopeful his 4th Congressional District can be flipped in 2020. It went heavily for President Obama in both 2008 and 2012, but in the last presidential vote, the district on the Pacific coast south of Portland tilted to Clinton by a slim 554 votes.

"Tell Socialist Democrat Peter DeFazio to oppose impeaching President Trump!" the Facebook ad says. It also quotes a television interview from the congressman, saying, "We are moving forward essentially with an impeachment inquiry…" 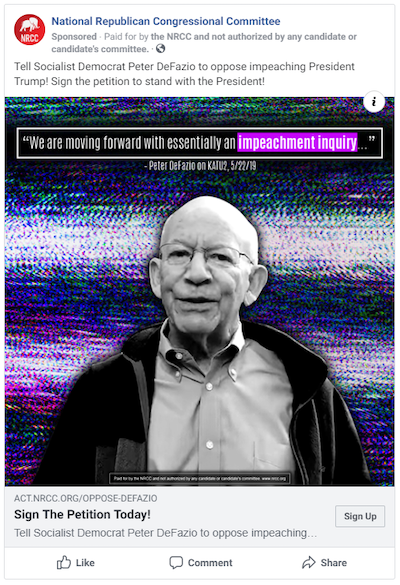 The early move against the long-serving Democrat comes on the heels of a CNN exclusive last week reporting the Trump campaign was eyeing Oregon for more attention and spending for the 2020 cycle.

DeFazio recently co-sponsored a ‘Medicare for All’ bill, "to create a single payer universal healthcare system," and also boasted that he was an "original co-sponsor of Congresswoman Alexandria Ocasio-Cortez's Green New Deal resolution."

"Socialist Democrat Peter DeFazio’s complacency in Oregon’s 4th Congressional District will cost him his job," said NRCC regional press secretary Torunn Sinclair. "Instead of representing the will of his voters, DeFazio’s cosponsoring legislation that will take away your private health care, and decimate America’s free market to support a socialist system of government."

The 16-term incumbent is also facing pressures from within his own party with a primary opponent.

"[L]ike other established Democrats across the nation, he's now seeing a challenge from the left," reported the Willamette Week. "In his case, it comes via Doyle Canning, a longtime activist now studying law at the University of Oregon."

DeFazio was already one of 55 Democrats on the initial list of targeted seats released by the NRCC in February, but the early ad investment seems to be evidence Republicans are serious in their hopes they could score an upset.

Emails to the DeFazio team requesting comment were not returned, but comment will be added to this story if provided.