Study Finds Media Spent Half Its Midterm Talk on Trump

88 percent of ABC, NBC, and CBS's comments about GOP were negative

A new study released by the Media Research Center found the media coverage from three major networks in the weeks leading up to the midterm elections focused on President Donald Trump and included vastly more negative comments about Republicans than Democrats.

Over nearly a two month period, ABC, NBC, and CBS evening newscasts focused on Trump for 62 minutes while talking about the closely watched races in Texas, Missouri, Georgia, and Arizona for just over 30 minutes, according to the conservative content analysis organization.

"Nearly half (62 minutes, or 48%) of the midterm coverage on the evening newscasts has focused on the president’s campaign activities, vs. 47 minutes (37%) for all of the individual House, Senate, and gubernatorial election contests combined," the MRC's report states.

The MRC also found that whenever these same newscasts discussed political parties, they largely talked about Republicans in a negative light, far more often than they negatively spoke of Democrats.

According to the MRC, "not only was network coverage of Republicans far more hostile (88% negative) than that meted out to Democrats (53% negative), but nearly ten times more negative statements about Republicans and President Trump (97) than all of the Democratic candidates combined (10)."

The negative coverage of Democrats occurs at a significantly lower percentage if you factor out the universal backlash to Sen. Elizabeth Warren's (D., Mass.) DNA test, which she released in an attempt to prove her Native American heritage.

"Coverage of the entire field of Democratic candidates would have been 67 percent positive [33 percent negative versus 53 percent] if it hadn’t been for negative comments in stories about Massachusetts Senator Elizabeth Warren’s DNA test," the MRC said. The study found Warren received "86% negative coverage following her DNA test." 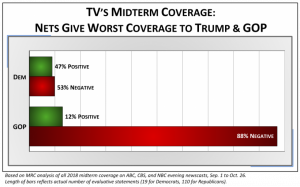 This negative coverage against Republicans was often uniform across the networks. For example, according to the MRC, "All three networks aired nearly identical reports blaming the Republican gubernatorial candidate, Secretary of State Brian Kemp, for alleged voter suppression in Georgia." All three networks have also criticized Trump's stump speech rhetoric as he campaigns for GOP candidates around the country.

MRC research director Rich Noyes, in his write-up of the study, also pointed out the tilt toward negative coverage of Republicans in 2018 is a continuation from the 2016 election cycle.

"The massive tilt in this year’s coverage shows that the aggressive bias of 2016 was no one-time fluke, but just more proof that the media have utterly discarded objectivity in favor of activism," Noyes wrote.